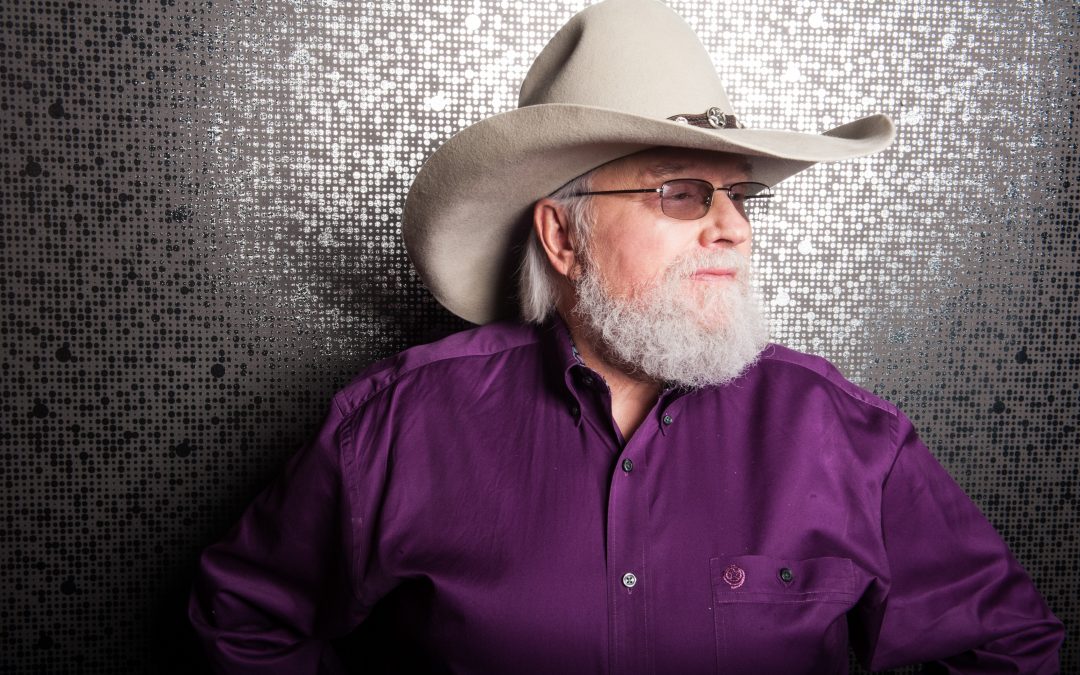 Nashville, Tenn. (July 6, 2020) — The country music community is mourning the loss of the legendary Charlie Daniels. The influential music icon passed away this morning following a hemorrhagic stroke. He was 83.

“The passing of Charlie Daniels is not only a huge loss for the industry but a personal loss. Charlie has been a personal friend throughout our career and we consider him family. Charlie was a patriot that stood for the good of all men. Charlie, you will be missed my friend.”
-Jeff Cook, ALABAMA (Country Music Hall of Fame member)

“From the eighties until last year, I’ve had the pleasure of not only touring with but getting to know Charlie Daniels. He was everything on stage a great artist should be. But it was the off stage Charlie I grew to love over the years. Many times Charlie would answer the call to do charity work and never charge a cent. He set a humble example of what a man, a friend, and Christian should be by the way he treated others. I’m gonna miss you my friend.”
-Teddy Gentry, ALABAMA (Country Music Hall of Fame member)

“Nobody I respected or admired, in this world, any MORE than my real friend, Charlie Daniels.”
-Randy Owen, ALABAMA (Country Music Hall of Fame member)

“One of my favorite people on this earth Charlie Daniels has gone on to his eternal reward today. Oh, how he will be missed at the Grand Ole Opry and everywhere else he was loved. Charlie, thank you for being a Patriot, a Statesman, a Christian, a friend, a father, a husband to Miss Hazel, and a great maker of music that will live on for generations. You made an indelible mark in this life, and you will be missed my brother.”
-Ricky Skaggs (Country Music Hall of Fame member)

“Charlie Daniels embodied the fire of the South. He blurred lines between rock and country, when rock didn’t think country was cool, and his Volunteer Jams weren’t just legendary, they brought people from both of those worlds together. He was a patriot, a proud American, a world class musician, an incredible showman, as well as a wonderful father, husband, grandpa and friend. We’re all so sad to lose him, but if I know Charlie, he’s up in heaven, rosining up his bow and getting ready to let those fingers fly! Godspeed, my friend, you’re home.”
-Ronnie Milsap (Country Music Hall of Fame member)

“It is a sad day for a southern gentleman. A soft spoken Godly man. A man I have known for 50 years. Yes my heart is broken but Hazel and Charlie Jr. have all of us holding them with the strength that Mr. Daniels has given us through the years. We are missing a man that already has the hands of his great God holding him. I have no words.”
-Doug Gray, The Marshall Tucker Band

“If there were a Southern Rock/Country/GOD fearing Patriot/Good old boy on Mt. Rushmore, Charlie Daniels likeness would be hammered, chiseled, and blasted onto it. We would follow him into battle. We would not follow him on stage. We couldn’t… no one else could either…‘nuff said. Heaven has never rocked like its ROCKIN’ right now. Charlie old friend, we’ll see you when we do. Rock on, friend.”
-Larry Gatlin

“Charlie was outspoken and larger than life on stage. Off stage, he was kind, compassionate and helped so many along the way, both in music and beyond. A showman, a patriot, a one-of-a-kind. He will be greatly missed.”
-John Anderson

“Charlie Daniels was a man of God, a voice of reason in unsettled times. He was a brother and friend. Until we meet again on the shores of the everlasting. Rest in Peace, Charlie Daniels.”
-Marty Raybon, Shenandoah

“For all of us in the music community, Charlie Daniels was like our big brother. He always took up for us and was always the one to stand up for our America. Thank you, Charlie. Go rest now. You made your mark on our world, and we will miss you.”
-Mike McGuire, Shenandoah

“It’s so hard to put into words what an influence Charlie’s music was on me and on everyone who ever heard it. He was an amazing man, musician, songwriter and entertainer. There was nothing he couldn’t do. He will be so missed in this world. Sending prayers to Hazel and all of his family.”
-Aaron Tippin

“Charlie Daniels was my friend. He was my friend on many levels and we had an unspoken understanding that if either of us ever needed the other, it was a given. Charlie was very bold about what he believed in and I am too. I’m gonna miss you old friend. I’ll tell you all about what happens when I get there. I love you and I miss you already but I’ll be there before you miss me. Say hello to Momma and enjoy your time till we meet again.”
-Darryl Worley

“Charlie was one of the most talented, kindest, patriotic and spiritual people I’ve ever had the pleasure of calling a friend. Whether I was doing shows with him from the Opry stage or on a stage in far away Japan, he always remained the consummate performer. The void he leaves in our business is enormous, and I know the music he will make in heaven will be overwhelming. Rest easy my friend.”
-T.G. Sheppard

“Wow… Charlie Daniels. We lost a great, great man today. But, we got to have him for a long time! A patriot! A man I have followed him for years who shared his faith and his heart daily with his friends and followers. I read his words everyday. Man, he loved this country! I will miss you, sir!”
-Larry Stewart, Restless Heart

“I’m deeply saddened by the news of Charlie Daniels’ passing. I lost my mother seven years ago to a hemorrhagic stroke; the shock only ever softened by knowing she was with her Lord. The same can be said for Charlie, who lived a vivid and bold life for God and country. Restless Heart is forever grateful for the many memories of working with him at his Volunteer Jam. Sending heartfelt prayers of peace and comfort to Charlie’s family, friends, and fans.”
-Dave Innis, Restless Heart

“The music community has lost one of its greatest American icons today. Charlie Daniels is one of those artists whosemusic will never die.He was also one of the nicest people I have ever met in my life and also a great Patriot. God bless him. Charlie Daniels was statue material.”
-Sammy Kershaw

“Deeply saddened by the news today of Charlie Daniels’ passing. Charlie Daniels was a true patriot, a man of God and a great American. To call him a musical icon is a gross understatement. A pioneer in the southern rock movement of the 70s, leading the Charlie Daniels Band, his bold and musically impressive songwriting, spawning legendary hits like ‘The South’s Gonna Do it Again,’ ‘Long Haired Country Boy,’ ‘In America,’ and, of course, ‘The Devil Went Down to Georgia,’ and many, many others that have already stood the test of time as some of the greatest, most iconic records in the history of rock-n-roll AND country music. I’m so incredibly honored to have been included in Charlie’s final music video of ‘Geechi Geechi Ya Ya Blues’ with his band, the Beau Weevils. I certainly didn’t expect it to be his last. Our industry has a huge void in it today. A great man of principal, honor, integrity and faith, who always told it like it is. There will never ever be another Charlie Daniels. My prayers go upward for his entire family. Rest in peace, Charlie.”
-Collin Raye

“It’s a sad thing to see Charlie leave us. He was a great patriotic American and had a major impact on our musical heritage.”
-Leroy Van Dyke

“Charlie Daniels was the John Wayne of Southern Rock, Rhythm and Blues. He always put the love of playing music above the business of music. And one more thing, he loved America!”
-Billy Dean

“I’m just devastated about losing Charlie Daniels. What a great talented man. He loved his country and his Lord. Prayers for his family.”
-Moe Bandy

“One of the finest people God ever put on the face of the earth. The definition of a true southern gentleman.”
-Danny Shirley, Confederate Railroad

From his Dove Award-winning gospel albums to his genre-defining southern rock anthems and his CMA Award-winning country hits, few artists have left a more indelible mark on America’s musical landscape than Charlie Daniels. An outspoken patriot, beloved mentor, and a true road warrior, Daniels parlayed his passion for music into a multi-platinum career and a platform to support the military, underprivileged children, and others in need. The Charlie Daniels Band has long populated radio with memorable hits and his signature song, “The Devil Went Down to Georgia.” Over the course of his career, Daniels received numerous accolades, including his induction into the Country Music Hall of Fame, the Musicians Hall of Fame and becoming a member of the Grand Ole Opry. Daniels helped to shine the spotlight on the many causes that are close to his heart. He was a staunch supporter of the military and gave his time and talent to numerous charitable organizations, including The Journey Home Project, that he founded in 2014 with his manager, David Corlew, to help veterans of the United States Armed Forces. For more information, visit charliedaniels.com.