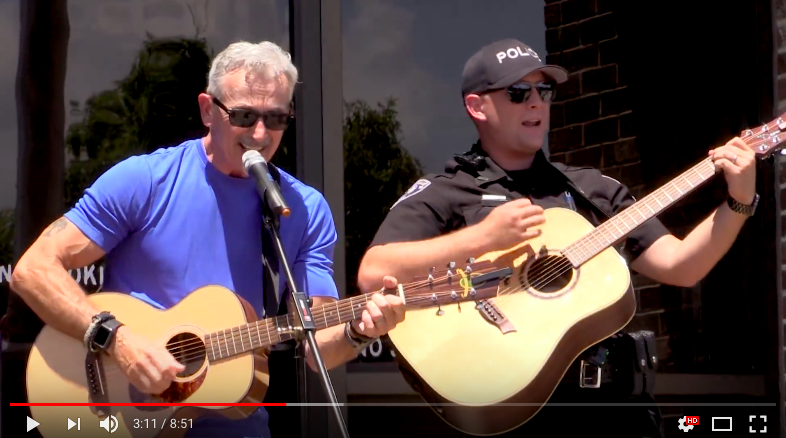 Nashville, Tenn. (August 16, 2018) — Officers of the Smithville, Tennessee Police Department have recruited a couple of their famous locals to help them participate in the nationally-trending lip-sync challenge. Country legends Aaron Tippin and John Anderson recently got in on the fun, joining some of Smithville’s finest to help lend some familiar voices to their efforts.

In the video, Tippin and the Smithville officers lip-sync his 1992 chart-topper, “There Ain’t Nothin’ Wrong with the Radio,” while Anderson joins in with his classic smash hit, “Swingin.” Within a matter of days, the video has racked up more than 100,000 views on Facebook.

“It was such a thrill to be asked to be in the Smithville Police Department’s video,” says Tippin. “We had a blast filming it. We love our law enforcement and appreciate them so much. I’m ready to do a sequel!”

“Smithville has been my home for the past 35 years, and some of these officers are 2nd and 3rd generation now,” adds Anderson. “They do so much and don’t often get recognized for their hard work and commitment to our community. I was proud to help out and hold up traffic on their behalf.”

The police lip-sync challenge has been all the rage over the past few weeks. The national campaign has rallied police departments across the country to create videos of officers lip-syncing their favorite songs. Many of the videos have gone viral.

The Smithville P.D. is encouraging viewers to donate to its charity organization, Cops for Kids, a non-profit that helps to ensure that the children of DeKalb County have gifts for Christmas.

Donations can be sent to:

Multi-platinum selling John Anderson has one of the most instantly recognizable voices in country music. Over the course of his 35-year career, Anderson has charted more than 60 singles on the country music charts, including 20 Top 10 hits, and six #1 hits: “Swingin,'” “Seminole Wind,” “Black Sheep,” “Wild and Blue,” “Straight Tequila Night,” and “Money in the Bank.” Anderson has been the recipient of the CMA (Country Music Association) “Horizon Award” (1983), the CMA “Single of the Year Award” (“Swingin'” – 1983), the CMA “Album of the Year Award” (Common Thread: The Songs of the Eagles – 1994), and the ACM (Academy of Country Music) “Career Achievement Award” (1993). In 2014, he was inducted into the prestigious Nashville Songwriters Hall of Fame.