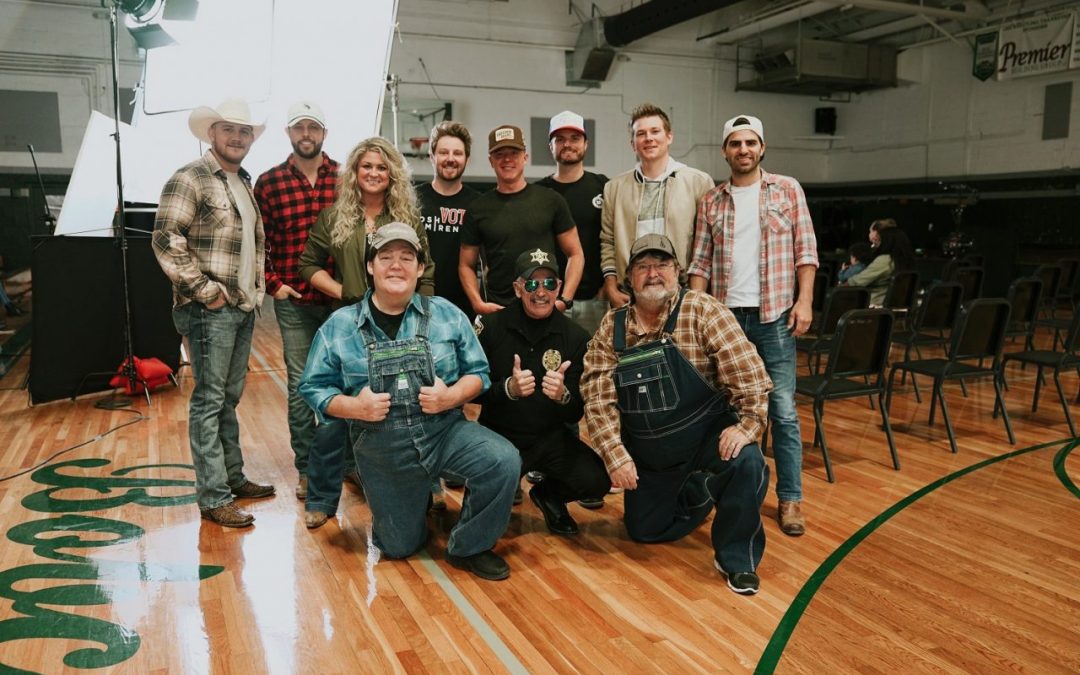 Filmed just north of Nashville at Greenbrier Middle School and The Brier Barn in Greenbrier, Tennessee, the video centers around a political debate. The eight featured artists take turns crooning what they’d do if they “ruled the world.” Shenandoah’s Marty Raybon and Mike McGuire star as rednecks “Buck & Earl” who are thoroughly entertained by their promises to make every country boy’s (and girl’s) dream a reality.

“It’s great to see them, as they call them, ‘The Youngbloods’ take the energy they have and present it in the videos, the music and the overall excitement of this music. It’s a good thang,” Raybon explains to Sounds Like Nashville.

Earlier this week, Sanders joined Shenandoah onstage to perform “Two Dozen Roses” during the band’s concert at Acme Feed & Seed in Nashville.  “Having Adam join us onstage Monday night was a real treat,” says McGuire. “We showed ’em how to ‘Rule the World!'”

In the video, Tippin makes an unforgettable appearance as the debate’s chief security officer as he drags an unruly Sanders from the gymnasium.

“What a cool and fun day getting to hang with Adam and be a part of his video,” Tippin tells Billboard. “Love the song and all of the great singers who were a part of it.”

About Aaron Tippin Aaron Tippin’s traditional sound and focus on working-class themes made him one of the most popular acts of the ’90s. Tippin’s major career hits include “Kiss This,” “My Blue Angel,” “There Ain’t Nothin’ Wrong with the Radio,” “Where the Stars and Stripes and the Eagle Fly,” “Working Man’s Ph.D.,” and “You’ve Got to Stand for Something.” In 2020, Tippin celebrates his 30th anniversary in music. For more information on Aaron Tippin, visit aarontippin.com.