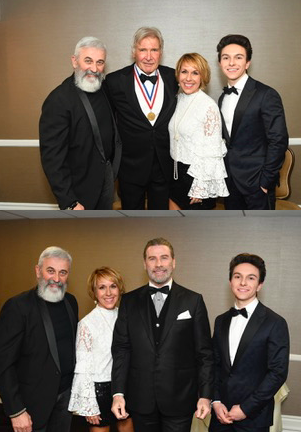 Nashville, Tenn. (January 31, 2018) — What do country singer Aaron Tippin, and acting legends Harrison Ford, and John Travolta have in common? They all love flying airplanes! On Friday, January 19, Tippin attended the 15th Annual “Living Legends of Aviation Awards” in Los Angeles, where he spent some time talking airplanes with two of Hollywood’s biggest film stars.

“What an honor to get to hang out with Harrison Ford and John Travolta at the ‘Living Legends of Aviation Awards,'” says Tippin. “The coolest thing about both of them is that they love aviation as much as I do, so, of course, that’s what we talked about all night.”

During the event, Tippin along with his wife, Thea, and son, Tom, performed two of his biggest career hits, “Where the Stars and Stripes and the Eagle Fly,” and “You’ve Got to Stand for Something.”

The “Living Legends of Aviation” annual awards gala is the most prestigious recognition event in aviation. Travolta, “The Official Ambassador of Aviation,” hosted the event, while Ford was in attendance to present the Harrison Ford Aviation Legacy Award to accomplished pilot Peter Paul Luce.