Aaron Tippin Swims with Mermaids to Raise Money for Veterans 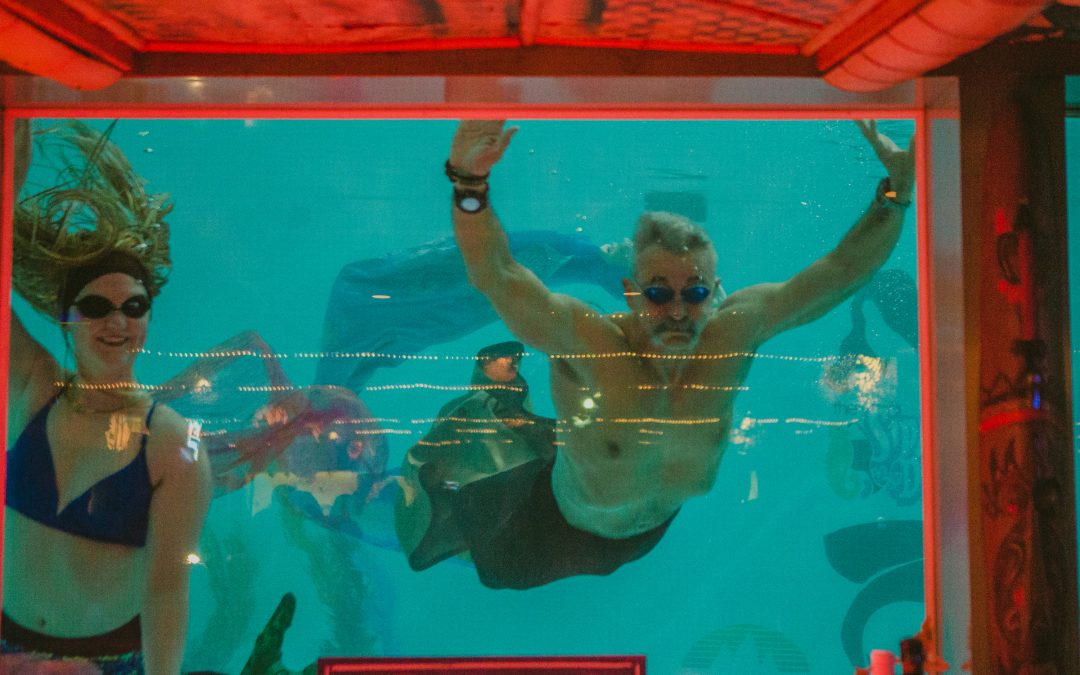 Nashville, Tenn. (May 1, 2019) — There are hundreds of occasions country singer Aaron Tippin has given back to United States military veterans over the years. From visiting wounded vets to performing throngs of benefit concerts and performing overseas, Tippin is known as one of the most patriotic singers in country music. Now the “Where the Stars and Stripes and the Eagle Fly” singer can add another checkmark to his long list of veterans support: swimming with mermaids!

Last week at the Sip ‘N Dip Lounge in Great Falls, Montana, Tippin transformed into a celebrity merman to raise funds for the Grace Home Veterans Center. Tippin joined several mermaids for a swim in the lounge’s indoor pool, visible through a giant window in the bar.

“If you told me I would be swimming with mermaids in a bar in Montana wearing a merman costume I would have told you you’re crazy, but that’s exactly what I did,” says Tippin. “When our friend and bar owner Sandi Thares asked me to do it for the Grace Home Veterans Center, I couldn’t say no. It was a blast and now I have a new respect for how tough it is to be a merman.”

The sold out event also featured a live performance by Tippin, as well as his wife Thea (a Great Falls native) and son, singer-songwriter Tom Tippin.

While visiting Great Falls, Tippin also made time to visit with several veterans who reside at the Grace Home Veterans Center. Click HERE to watch the day’s events unfold.

Aaron Tippin’s traditional sound and focus on working-class themes made him one of the most popular acts of the 1990s. Tippin’s major career hits include “Kiss This,” “My Blue Angel,” “There Ain’t Nothin’ Wrong with the Radio,” “Where the Stars and Stripes and the Eagle Fly,” “Working Man’s Ph.D.,” and “You’ve Got to Stand for Something.” In 2015, Tippin celebrated 25 years in the music business and released Aaron Tippin 25, a two-disc collection of 25 songs that includes 10 freshly recorded versions of his biggest career hits, as well as 15 brand new songs. The album is available for purchase at aarontippin.comand iTunes.