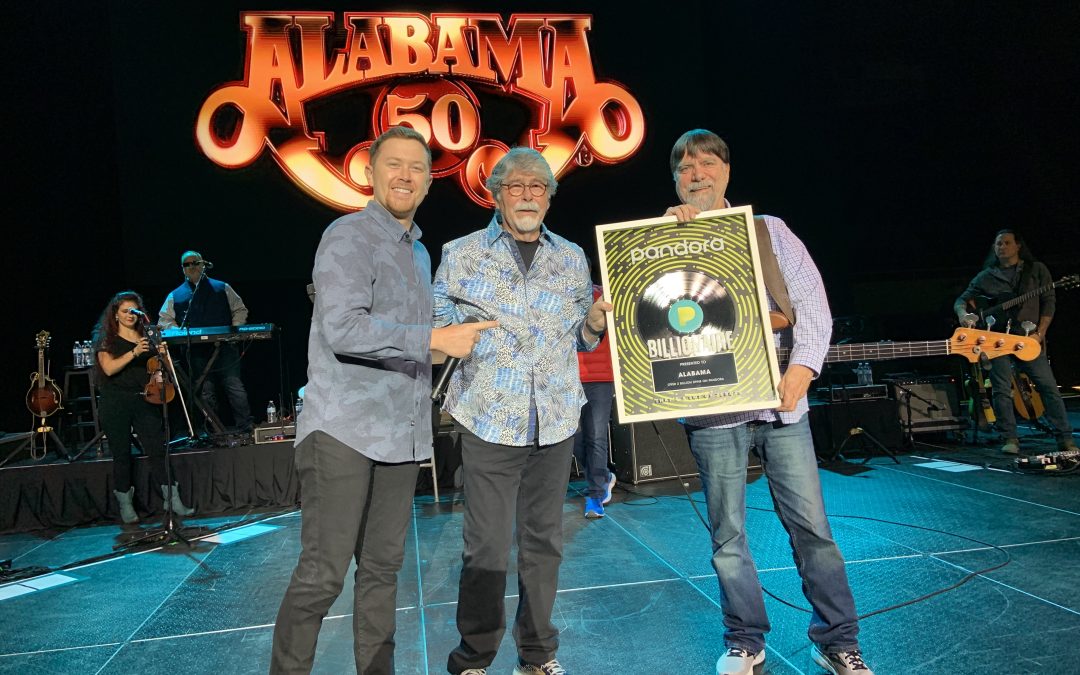 “The Pandora plaque was a nice surprise,” says Gentry. “We thought a million plays was a very big deal but two billion plays of our songs puts it over the top. We appreciate Pandora and thanks for the award.”

“We are so thankful to our fans and listeners for playing our music for over 50 years,” adds Owen. “Two billion is a big number. That means they like our music and want to hear it again and again. Thank you Pandora for tfhe award.”

The music of ALABAMA will now be played on Pandora’s Country Billionaires station.

Over 50 years ago, Jeff Cook, Teddy Gentry and Randy Owen left the cotton farms of Fort Payne, Alabama to spend the summer playing music in a Myrtle Beach, South Carolina bar called The Bowery. It took them six long years of tip jars and word-of-mouth to earn the major label deal they’d been dreaming of. Then, seemingly no time at all to change the face of country music. ALABAMA, country music’s first band, was inducted into the Country Music Hall of Fame in 2005. The group is known for hit songs including “Mountain Music,” “Roll On,” “Dixieland Delight” and “If You’re Gonna Play In Texas (You Gotta Have A Fiddle In The Band).” From humble beginnings picking cotton in the fields to international stars, ALABAMA went on to sell 80 million albums and charted 43 No.1 hits, becoming the most successful band in the history of country music. In November 2022, ALABAMA co-founder Jeff Cook passed following a lengthy battle with Parkinson’s disease. With his prior encouragement and wishes, ALABAMA continues touring on a limited basis, keeping the iconic music they created alive for the current and future generation of fans.

About Pandora
Pandora, a subsidiary of SiriusXM, is the largest ad-supported audio entertainment streaming service in the U.S. Pandora provides consumers a uniquely-personalized music and podcast listening experience with its proprietary Music Genome Project® and Podcast Genome Project® technology. Pandora is also the leading digital audio advertising platform in the U.S. Through its own Pandora service, its AdsWizz platform, and third party services, such as SoundCloud, the Company connects brands to the largest ad-supported streaming audio marketplace in the country. Pandora is available through its mobile app, the web, and integrations with more than 2,000 connected products.