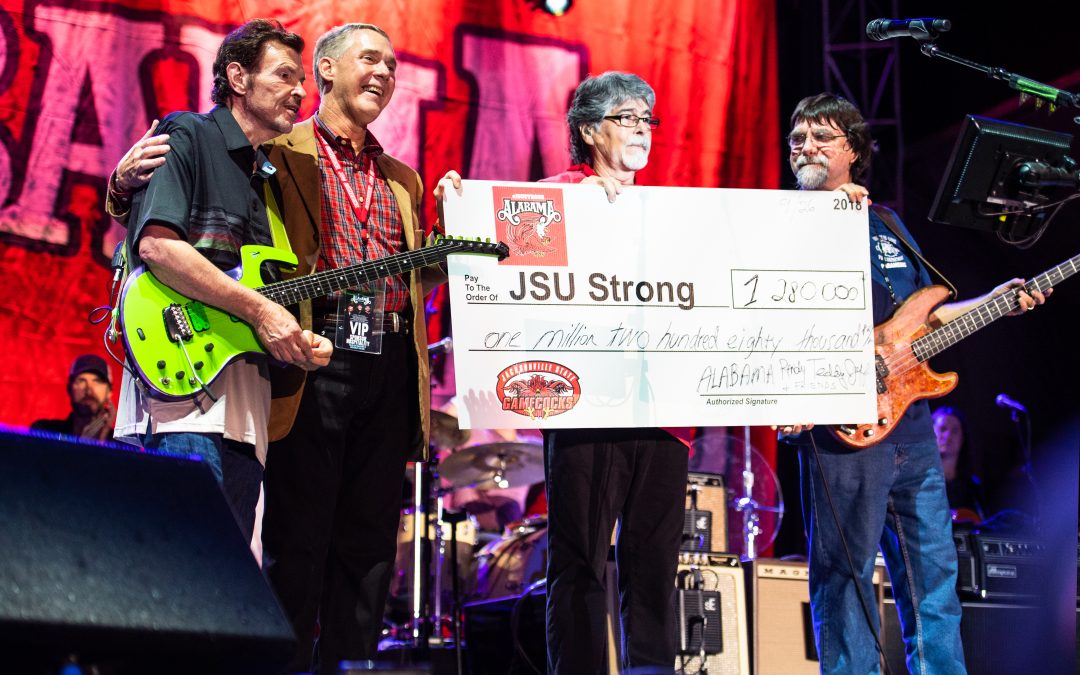 “Teddy, Jeff and I are so proud of the artists who played this benefit for tornado damage at Jacksonville State University,” says ALABAMA frontman Randy Owen. “With over $70 million dollars in damages, we’re glad that we, along with our artist friends, were able to help raise over a million dollars Wednesday night. I graduated from JSU so it’s very personal for me. Teddy and Jeff said ‘let’s do this’ the day I called them after the tornado. #JSUSTRONG.”

“We are so thankful to Randy Owen, Teddy Gentry, and Jeff Cook of ALABAMA and all the other artists, sponsors, and university personnel who worked together selflessly to make this event a huge success,” notes JSU President John Beehler. “Not only was nearly $1.3 million raised to help us rebuild our campus, but smiles were put on the faces of thousands of attendees who have endured so much since the devastating tornado of March 19. The impact of this concert will be felt for years to come.”

On March 19 of this year, JSU and the surrounding Jacksonville community was hit by a EF-3 tornado, severely damaging 23 buildings and impacting more than 50 more. Fortunately, there was no loss of life however millions of dollars in damage was reported following the storm.

*This event was made possible by Outback Concerts, official promoter and Jacksonville State University partner for the ALABAMA & Friends #JSUStrong tornado relief concert

Outback Concerts is an independent, full-service concert and comedy promoter based in Nashville, TN. In addition to producing hundreds of concerts and events each year, ranging from clubs to arenas across the country and Canada, Outback Concerts also produces the Nashville Comedy Festival. The company also exclusively books SMG’s Cary’s Booth Amphitheatre in Cary, NC. Outback Concerts President Mike Smardak was a 2011 inductee of the IEBA Hall of Fame. In November of 2016, Mike Smardak was honored with a distinguished NATD Award alongside Nashville’s most recognized members of the entertainment industry. In March of 2018, Smardak was honored by the T.J. Martell Foundation with the Tony Martell Outstanding Entertainment Achievement Award. Promoter Andrew Farwell was voted IEBA Rookie of the Year in 2014.