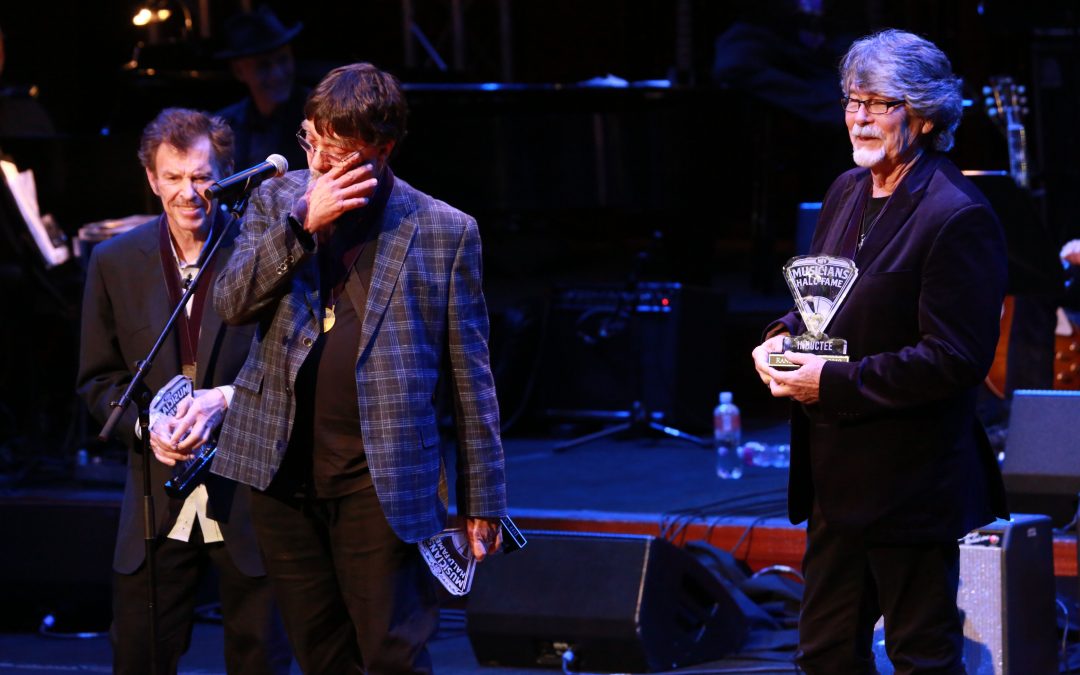 Nashville, Tenn. (October 23, 2019) — ALABAMA, the most successful band in the history of country music, has been formally inducted into the Musicians Hall of Fame. Last night, October 22, Jeff Cook, Teddy Gentry and Randy Owen were made official members during a commemorative Medallion Ceremony held at the Schermerhorn Symphony Center in Nashville, Tennessee.

Musicians Hall of Fame founder Joe Chambers welcomed the group to the stage to receive the honor.

“From a band standpoint, I’ve had to play my own music since we got started. I remember me and Randy, when we were growing up, running across the cotton field in the afternoon, to pick out a new Beatles chord on guitar,” said Gentry during the ceremony. “Music was about all we had to lean on and hope for and live for. Our families were so poor and music was that magic thing that held us together.”

In addition to the band’s induction, it received the Musicians Hall of Fame’s first-ever Lifetime Achievement Award.

“This makes all the hours I spent trying to work up the intro to ‘Mountain Music’ and ‘Lady Down on Love’ and ‘Tennessee River’ and ‘Face to Face’ and those songs that I worked on so long to get the lick, it makes it seem all worthwhile,” noted Owen. “I don’t know how long I spent on the sound of the guitar in ‘My Home’s in Alabama,’ so it would sound like the whole room was full. Still today when you kick into ‘Mountain Music,’ the audience knows the song. It came from a lot of work and a lot of thought.”

Cook, Gentry and Owen then took the stage to receive their awards and give thanks for the honor.

“I want to thank my wife who has put up with a lot, and also I’d like to thank God,” said Cook after receiving his award.

It’s been 50 years since Jeff Cook, Teddy Gentry and Randy Owen left the cotton farms of Fort Payne, Alabama to spend the summer playing music in a Myrtle Beach, South Carolina bar called The Bowery. It’s a classic American tale of rags to riches. From humble beginnings picking cotton in the fields, to international stars that went on to sell 80 million albums, while changing the face and sound of country music. Quality songs that have become the soundtrack for American life are the foundation for ALABAMA’s stellar career. The group introduced rock style guitars, lights, pyrotechnics and sounds to the country audience that has inspired many of today’s brightest country stars including Kenny Chesney, Jason Aldean and Luke Bryan. While their music continues to stand the test of time, their numbers and stats are beyond compare. Almost five decades since starting the band, ALABAMA has charted 43 #1 singles, including 21 #1 singles in a row, and have won dozens of CMA, GRAMMY®, and ACM Awards. They are members of the Country Music Hall of Fame and have their own star of the Hollywood Walk of Fame. In addition, they are world-class philanthropists who have raised millions of dollars for various charities.