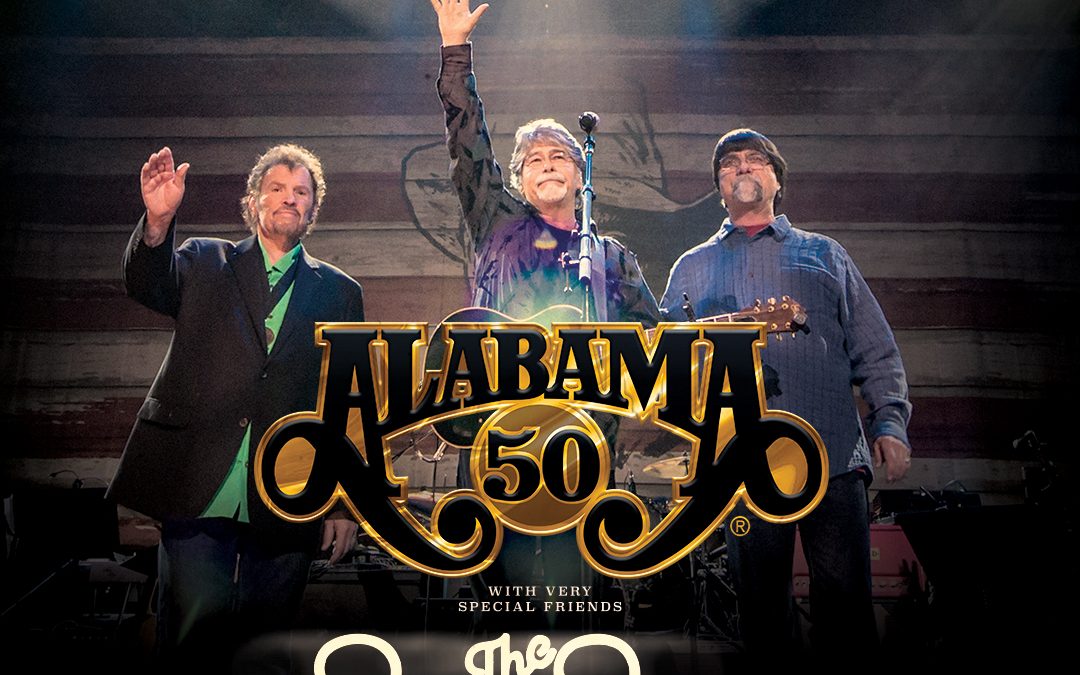 Nashville, Tenn. (August 12, 2019) — Seven-time multi-platinum selling band and the most decorated country music group in history ALABAMA has added yet another arena performance to its extensive “50th Anniversary Tour.” Band members Jeff Cook, Teddy Gentry and Randy Owen have tapped very special friends The Beach Boys to join them for a “once-in-a-lifetime” concert on Saturday, November 2 at 7:00 p.m. / CT at the Intrust Bank Arena in Wichita, Kansas.

“Jeff, Randy and I used to listen to the incredible harmonies of The Beach Boys when we started our band 50 years ago,” says ALABAMA bass player and vocalist Teddy Gentry. “Our goal as a band was to have the same magic as The Beach Boys’ harmonies and unique songs.”

Many guest artists have joined ALABAMA on the road to help celebrate its 50-year milestone. However, Wichita is the only North American city on the tour to feature a performance by The Beach Boys.

“We are excited to share the stage together with The Beach Boys at this special one-time concert,” Gentry adds. “I think the fans are going to be dancing and smiling all night long. We can’t wait!”

Presented by Outback Presents, tickets go on-sale this Friday, August 16 at 10:00 a.m. / CT at the Select-A-Seat box office or online at selectaseat.com. Earlier this summer, ALABAMA announced the second string of dates for its cross-country “50th Anniversary Tour” commemorating the band’s five decades of music. For tour dates visit thealabamaband.com.

It’s been 50 years since Jeff Cook, Teddy Gentry and Randy Owen left the cotton farms of Fort Payne, Alabama to spend the summer playing music in a Myrtle Beach, South Carolina bar called The Bowery. It’s a classic American tale of rags to riches. From humble beginnings picking cotton in the fields, to international stars that went on to sell 80 million albums, while changing the face and sound of country music. Quality songs that have become the soundtrack for American life are the foundation for ALABAMA’s stellar career. The group introduced rock style guitars, lights, pyrotechnics and sounds to the country audience that has inspired many of today’s brightest country stars including Kenny Chesney, Jason Aldean and Luke Bryan. While their music continues to stand the test of time, their numbers and stats are beyond compare. Five decades since starting the band, ALABAMA has charted 43 #1 singles, including 21 #1 singles in a row, and have won dozens of CMA, GRAMMY®, and ACM Awards. They are members of the Country Music Hall of Fame and have their own star of the Hollywood Walk of Fame. In addition, they are world-class philanthropists who have raised millions of dollars for various charities. ALABAMA is currently on the road celebrating five decades of music on its historic “50th Anniversary Tour.”

About The Beach Boys

The Beach Boys continue to hold Billboard / Nielsen SoundScan’s record as America’s top-selling band for albums and singles, and they are also the American group with the most Billboard Top 40 chart hits (36). “Good Vibrations” was inducted into the GRAMMY Hall of Fame® in 1994. Sounds Of Summer: The Very Best Of The Beach Boys has achieved triple-Platinum sales status and The SMiLE Sessions, released to worldwide critical acclaim in 2011, was heralded as the year’s Best Reissue by Rolling Stone and earned a GRAMMY Award® for Best Historical Album. That’s Why God Made The Radio, The Beach Boys’ 2012 studio album celebrating their 50th anniversary, debuted at No. 3 on the Billboard 200 albums chart. Inducted into the Rock and Roll Hall of Fame in 1988 and recipients of The Recording Academy’s Lifetime Achievement Award, The Beach Boys are a beloved American institution that remains iconic around the world.

For more information on The Beach Boys, visit thebeachboys.com.

Outback Presents is an independent, full-service concert and comedy promoter based in Nashville, Tennessee. In addition to producing hundreds of concerts and events each year, ranging from clubs to arenas across the country and Canada, Outback Presents also produces the Nashville ComedyFestival. Outback Presents President Mike Smardak was a 2011 inductee of the IEBA Hall of Fame. In November of 2016, Mike Smardak was honored with a distinguished NATD Award alongside Nashville’s most recognized members of the entertainment industry. In March of 2018, Smardak was honored by the T.J. Martell Foundation with the Tony Martell Outstanding Entertainment Achievement Award. Promoter Andrew Farwell was voted IEBA Rookie of the Year in 2014.