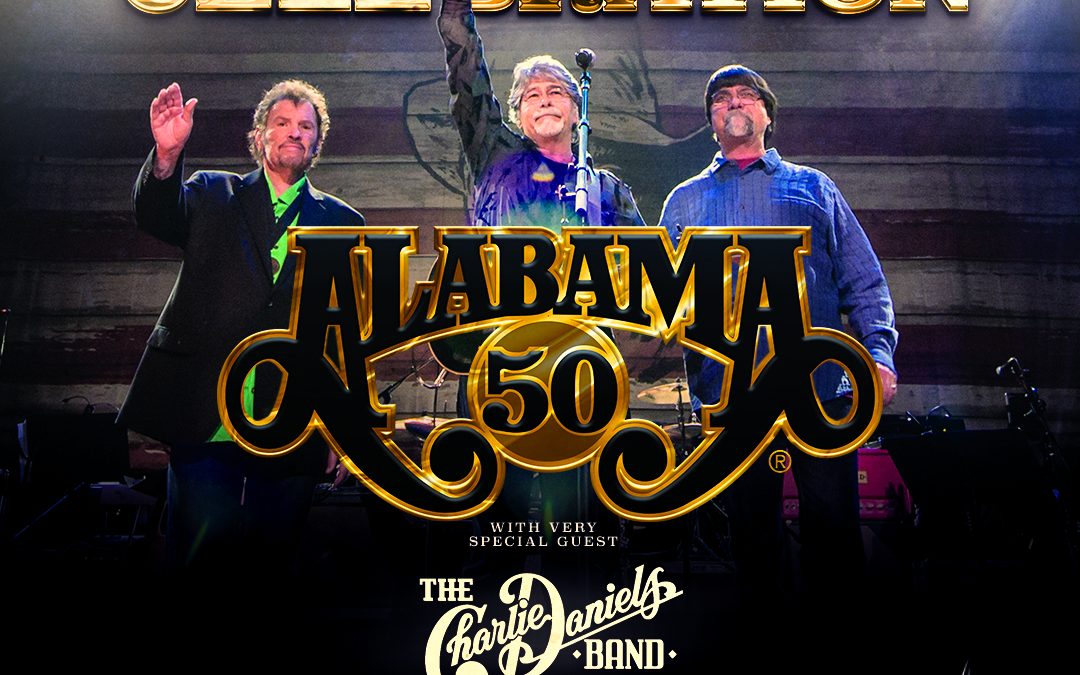 Nashville, Tenn. (June 25, 2019) — ALABAMA, the most-awarded country music group of all-time, will mark the end of its historic “50th Anniversary Tour” with a final stop in Music City later this year. Tuesday morning, the band announced its “50th Anniversary End of Tour Celebration,” set for 7 p.m. on November 20 at Bridgestone Arena in Nashville, Tennessee.

“Our ’50th Anniversary Tour’ has been really special with The Charlie Daniels Band being at most cities we’ve played,” says Gentry. “We could call this the ‘Country Music Hall of Fame Tour.’ Three generations of fans now sing along to our songs each night.”

“It’s hard to believe we started this band 50 years ago in my parents’ house,” adds Cook. “The Nashville concert at Bridgestone Arena will be a fun celebration for the fans and for Randy, Teddy and me.”

Since ALABAMA’s “50th Anniversary Tour” launched in January, the “Mountain Music” singers have played to hundreds of thousands of people in sold-out arenas across the country. By the year’s end, the band will have performed more than 50 shows for both lifelong fans and the next generation of concertgoers, many of whom experienced ALABAMA for the first time.

“This tour has been amazing,” notes Owen. “We are humbled by the huge response and sell out crowds. Ending in Nashville with this ‘End of Tour Celebration’ will give us a chance to invite some of our friends to join us. We are thankful to all the fans for supporting us over the past 50 years.”

Tickets go on sale this Friday, June 28 at 10 a.m. and will be available for purchase via Ticketmaster.com, by phone at 800-745-3000, all Ticketmaster locations and the Bridgestone Arena box office.

It’s been 50 years since Jeff Cook, Teddy Gentry and Randy Owen left the cotton farms of Fort Payne, Alabama to spend the summer playing music in a Myrtle Beach, South Carolina bar called The Bowery. It’s a classic American tale of rags to riches. From humble beginnings picking cotton in the fields, to international stars that went on to sell 80 million albums, while changing the face and sound of country music. Quality songs that have become the soundtrack for American life are the foundation for ALABAMA’s stellar career. The group introduced rock style guitars, lights, pyrotechnics and sounds to the country audience that has inspired many of today’s brightest country stars including Kenny Chesney, Jason Aldean and Luke Bryan. While their music continues to stand the test of time, their numbers and stats are beyond compare. Almost five decades since starting the band, ALABAMA has charted 43 #1 singles, including 21 #1 singles in a row, and have won dozens of CMA, GRAMMY®, and ACM Awards. They are members of the Country Music Hall of Fame and have their own star of the Hollywood Walk of Fame. In addition, they are world-class philanthropists who have raised millions of dollars for various charities. ALABAMA is currently on the road celebrating five decades of music on its historic “50th Anniversary Tour.”