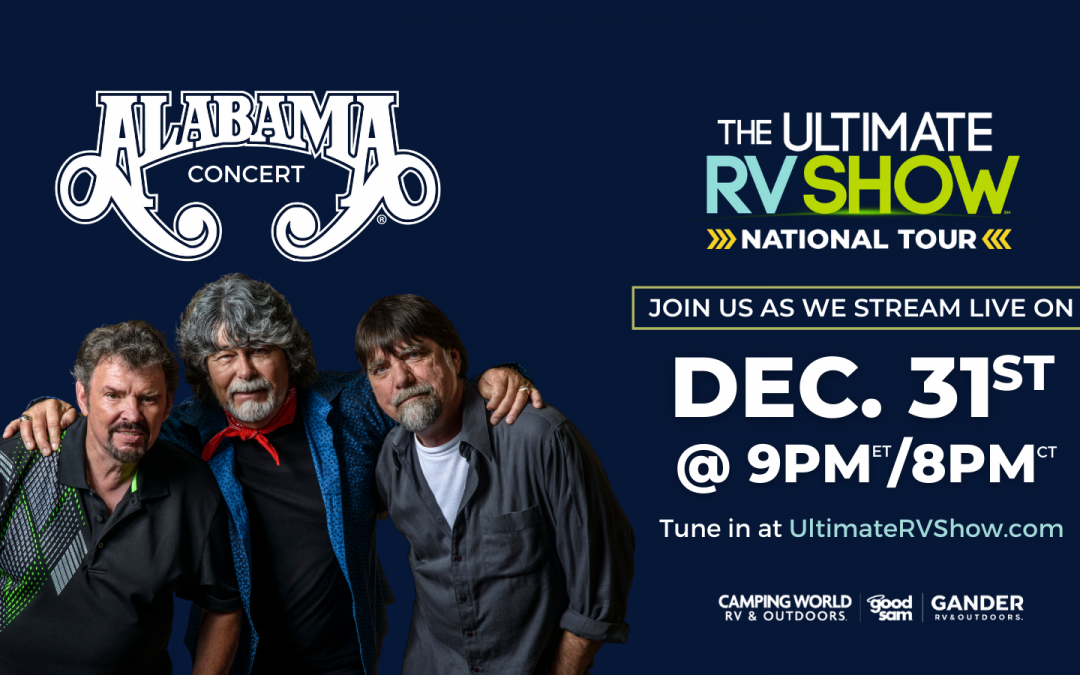 Nashville, Tenn. (December 29, 2020) — COVID-19 has halted most all live concerts across the country but that isn’t stopping iconic country group ALABAMA from bringing music to its fans this New Year’s Eve.

Today, ALABAMA revealed that it is again teaming with Camping World® for a virtual concert, set to stream live this Thursday, December 31 at 8 p.m. / CT. The multi-platinum selling Country Music Hall of Fame band will help ring in 2021 with a special performance featuring the ALABAMA tunes fans have adored for more than five decades.

“What better way to start the New Year than to have a free concert on New Year’s Eve for our fans around the world? We are pleased that Marcus Lemonis and our friends at Camping World are presenting this special performance from Nashville, Tennessee. We cannot wait to get back on tour soon, and want to see you in-person. Sit back, relax, crank up the sound and ‘ROLL ON’ into 2021. Wishing you a very happy New Year.” -Randy, Teddy & Jeff

About ALABAMA
It’s been more than 50 years since Jeff Cook, Teddy Gentry and Randy Owen left the cotton farms of Fort Payne, Alabama to spend the summer playing music in a Myrtle Beach, South Carolina bar called The Bowery. It’s a classic American tale of rags to riches. From humble beginnings picking cotton in the fields to international stars, ALABAMA went on to sell 80 million albums and change the face and sound of country music. Quality songs that have become the soundtrack for American life are the foundation for ALABAMA’s stellar career. The group introduced rock style guitars, lights, pyrotechnics and sounds to the country audience that has inspired many of today’s brightest country stars including Kenny Chesney, Jason Aldean and Luke Bryan. While their music continues to stand the test of time, their numbers and stats are beyond compare. Five decades since starting the band, ALABAMA has charted 43 #1 singles, including 21 #1 singles in a row, and have won dozens of CMA, GRAMMY®, and ACM Awards. They are members of the Country Music Hall of Fame, the Musicians Hall of Fame and have their own star on the Hollywood Walk of Fame. In addition, they are world-class philanthropists who have raised millions of dollars for various charities.

About Camping World Holdings
Camping World Holdings, headquartered in Lincolnshire, Illinois, is the leading outdoor and camping retailer, offering an extensive assortment of recreational vehicles for sale, RV and camping gear, RV maintenance and repair and the industry’s broadest and deepest range of services, protection plans, products and resources. Since the Company’s founding in 1966, Camping World has grown to become one of the most well-known destinations for everything RV, with over 140 retail locations in 36 states and a comprehensive e-commerce platform. Coupled with an unsurpassed portfolio of industry-leading brands including, Gander Outdoors, Gander RV, Good Sam, Overton’s, The House, and Windward/W82, Camping World Holdings has become synonymous with outdoor experiences. Camping World’s stock is traded on the New York Stock Exchange under the symbol “CWH”.