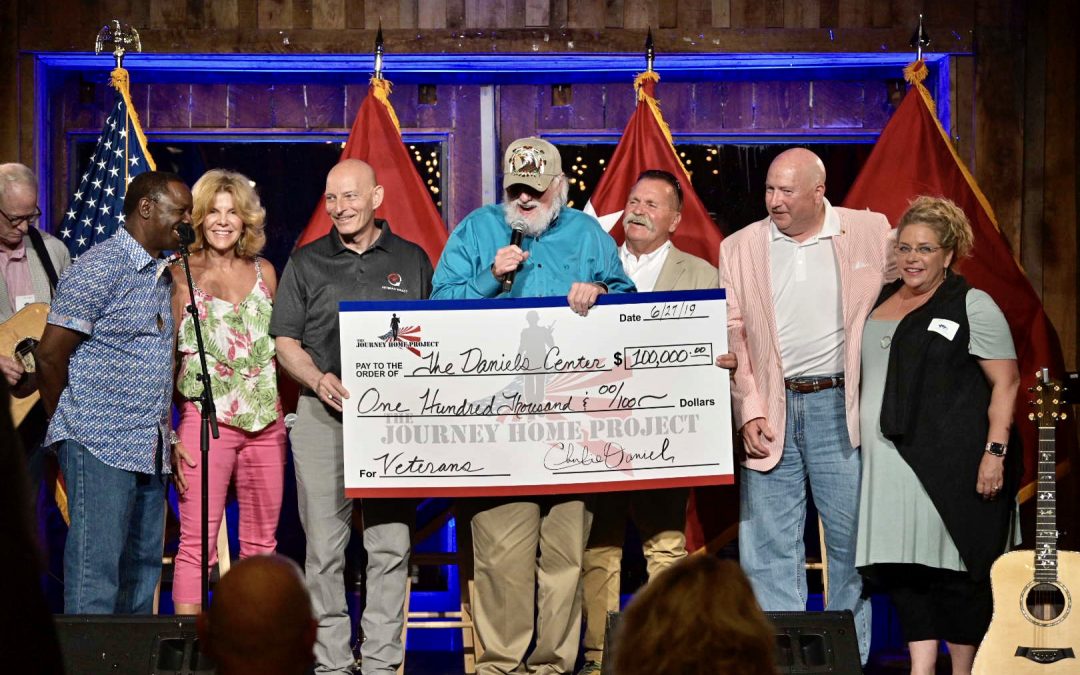 “Nobody has a bigger heart for the veterans and the folks at the Center,” says Daniels. “It’s where our veterans can be together. It’s state-of-the-art, hands-on, active, it’s a wonderful thing. I’d like to see it at all the colleges. There’s a lot that goes on there. I’m amazed.”

During the event, the legendary singer, his manager David Corlew, and retired Major General Terry “Max“ Haston (on behalf of their veterans non-profit The Journey Home Project) presented a $100,000 check to the Daniels Center.

“We are very honored to be a part of the wonderful team that created the Daniels Center,” notes Corlew. “They have accomplished much in the process of reintegration of veterans back into civilian life. Changing veterans’ lives is our goal.”

Later in the evening, Daniels delivered remarks and performed “Long Haired Country Boy,” and gospel classic “How Great Thou Art.” Daniels was also awarded a Key to the City by Murfreesboro Mayor Shane McFarland.

The Daniels Center is the largest and most comprehensive veterans center on any Tennessee higher education campus. It enables the campus’ 1000-plus student-veteran population to have a one-stop shop to meet a variety of academic needs. The 3,200-square-foot center is located in the Keathley University Center, right in the heart of the MTSU campus. The center is a place for MTSU’s student veterans to study, to gather and to get help from fellow veterans, who serve as peer advisers and sponsors. The Transitioning Home Office assists student veterans — or any student — in making the transition from being a college student to getting their career underway. The second Veteran Impact Celebration was sponsored by The Journey Home Project, Nashville-based Hiller Plumbing, Heating, Cooling & Electrical, Censis Technologies Inc, Dollar General, Steel Barrel Brewing Company, The Grove at Williamson Place, Stones River Total Beverages and Mission BBQ.

From his Dove Award-winning gospel albums to his genre-defining Southern Rock anthems and his CMA Award-winning country hits, few artists have left a more indelible mark on America’s musical landscape than Charlie Daniels. An outspoken patriot, beloved mentor, and still a road warrior at age 82, Daniels has parlayed his passion for music into a multi-platinum career and a platform to support the military, underprivileged children, and others in need. The Charlie Daniels Band has long populated radio with memorable hits and his signature song, “The Devil Went Down to Georgia.” Over the course of his career, Daniels has received numerous accolades, including his induction into the Country Music Hall of Fame, the Musicians Hall of Fame and becoming a member of the Grand Ole Opry. Daniels helps to shine the spotlight on the many causes that are close to his heart. He’s a staunch supporter of the military and lends his time and talent to numerous charitable organizations, including The Journey Home Project, that he founded in 2014 with his manager, David Corlew, to help veterans of the United States Armed Forces.