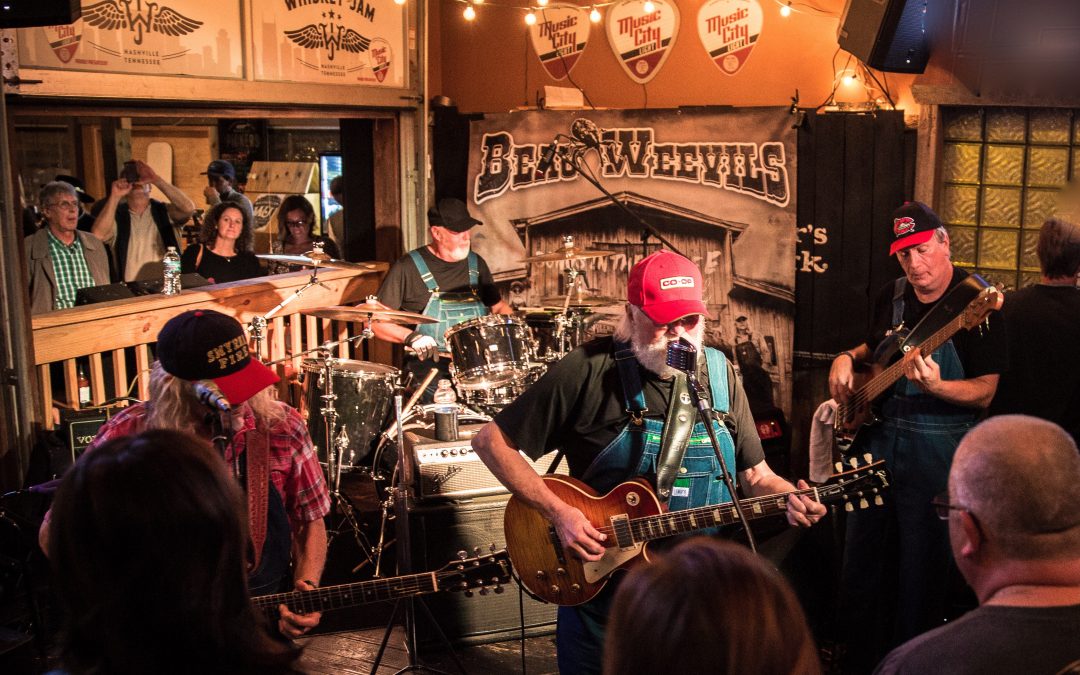 Nashville, Tenn. (October 31, 2018) – Winners Bar & Grill in Nashville was standing room only last night when Charlie Daniels, James Stroud, Billy Crain and Charlie Hayward performed together live, for the first time, at a special pop-up show where they showcased tunes from their new album, Beau Weevils – Songs in the Key of E.

The Beau Weevils slayed through several tracks on the newly-released album, including “Geechi Geechi Ya Ya Blues,” “Mexico Again,” “Louisiana Blues,” “Smokey’s Got Your Number,” and “Mudcat.” The live show also included performances by Scooter Brown and Lukas Lamb. SiriusXM’s Storme Warren emceed.

Daniels describes the new recordings as “Downhome, Swampy Rock meets Funk with a little taste of ‘Delta’ type of style.” The new ten-track compilation features lead vocals, guitar and fiddle by Daniels, Stroud on drums and percussion, Crain on guitar, and Hayward on bass. The album was released last Friday, October 26, and is available for purchase here: http://smarturl.it/beauweevils

Beau Weevils: Songs in the Key of E Track Listing:

From his Dove Award-winning gospel albums to his genre-defining southern rock anthems and his CMA Award-winning country hits, few artists have left a more indelible mark on America’s musical landscape than Charlie Daniels. An outspoken patriot, beloved mentor, and still a road warrior at age 82, Daniels has parlayed his passion for music into a multi-platinum career and a platform to support the military, underprivileged children, and others in need. The Charlie Daniels Band has long populated radio with memorable hits and his signature song, “The Devil Went Down to Georgia.” Over the course of his career, Daniels has received numerous accolades, including his induction into the Country Music Hall of Fame, the Musicians Hall of Fame and becoming a member of the Grand Ole Opry. Daniels helps to shine the spotlight on the many causes that are close to his heart. He’s a staunch supporter of the military and lends his time and talent to numerous charitable organizations, including The Journey Home Project, that he founded in 2014 with his manager, David Corlew, to help veterans of the United States Armed Forces. For more information, visit charliedaniels.com.