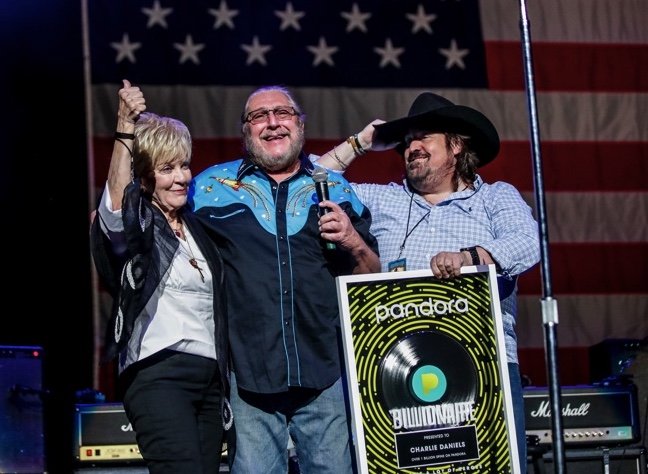 The Marshall Tucker Band (MTB), longtime friends of The Charlie Daniels Band (CDB), were on-hand to make the presentation. During the group’s set, MTB lead singer Doug Gray called Daniels’ wife of nearly 56 years, Hazel Daniels and his son, Charlie Daniels Jr., to the stage, surprising them with the special plaque from Pandora.

“Let’s cry together,” Gray told Hazel and Daniels Jr., who were visibly emotional.

“This special award and the entire night brought tears to my eyes, to see how much his fans loved him, because he loved them, too,” explains Daniels’ wife. “It was such an honor. I wish everyone had fans as loyal as Charlie’s.”

Daniels Jr. was equally as thrilled about the honor for his legendary father.

“In what was an exciting, uplifting and emotional night, one of the highlights of this year’s Volunteer Jam for me was the presentation of the Pandora Billionaire Award,” he says. “For an artist whose main success was when record sales were measured by gold and platinum albums and decades before the advent of streaming to reach that milestone, this is a real testament to dad’s legacy and to his millions of fans who continue to listen to his music. He would be honored and humbled.”

“The State of Tennessee declared August 18th Charlie Daniels Day,” notes Daniels’ manager and friend David Corlew. “We had an epic tribute to Charlie with an incredible lineup, and to top the great evening, Doug Gray of The Marshall Tucker Band presented Hazel and Charlie Jr. with the Pandora Billionaire Award. That’s as good as it gets.”

The 2021 Volunteer Jam: A Musical Salute to Charlie Daniels was produced by Outback Presents in association with David Corlew and Associates and Conway Entertainment Group.

From his Dove Award-winning gospel albums to his genre-defining southern rock anthems and his CMA Award-winning country hits, few artists have left a more indelible mark on America’s musical landscape than the late Charlie Daniels. An outspoken patriot, beloved mentor, and a true road warrior, Daniels parlayed his passion for music into a multi-platinum career and a platform to support the military, underprivileged children, and others in need. The Charlie Daniels Band has long populated radio with memorable hits and his signature song, “The Devil Went Down to Georgia.” Over the course of his career, Daniels received numerous accolades, including his induction into the Country Music Hall of Fame, the Musicians Hall of Fame and becoming a member of the Grand Ole Opry. Daniels helped to shine the spotlight on the many causes that were close to his heart. He was a staunch supporter of the military and gave his time and talent to numerous charitable organizations, including The Charlie Daniels Journey Home Project, which he founded in 2014 with his manager, David Corlew, to help veterans of the United States Armed Forces. Daniels passed away on July 6, 2020. He was 83.

Nearly 50 years ago, The Marshall Tucker Band was founded in Spartanburg, SC. Thanks to hits like “Can’t You See,” “Heard It in a Love Song,” “Fire on the Mountain,” and “24 Hours At a Time,” the 5x Gold, 3x Platinum-selling Southern Rock group has sold millions of albums worldwide. MTB songs have been featured in major motion picture films and television shows including Breaking Bad, Blow, The Box, Swing Vote, Half Nelson, My Name Is Earl, Cold Case Files and Good Guys. CMT (Country Music Television) named the MTB’s “Can’t You See” the #4 Greatest Southern Rock Song. The MTB’s debut album, The Marshall Tucker Band, reigns as Gibson Guitar’s #5 Greatest Southern Rock Album. UltimateClassicRock.com crowned the MTB’s “Can’t You See” as the #1 Southern Rock Song and in 2013, GRAMMY® Magazine named the group’s logo as one of the most distinctive and iconic brands in music.

Outback Presents is the leading independent, full-service promoter of live entertainment. Based in Nashville, Outback Presents produces thousands of music and comedy shows, tours, and festivals annually across North America and connects its diverse roster of artists with their fans.

Pandora, a subsidiary of SiriusXM, is the largest ad-supported audio entertainment streaming service in the U.S. Pandora provides consumers a uniquely-personalized music and podcast listening experience with its proprietary Music Genome Project® and Podcast Genome Project® technology. Pandora is also the leading digital audio advertising platform in the U.S. Through its own Pandora service, its AdsWizz platform, and third party services, such as SoundCloud, the Company connects brands to the largest ad-supported streaming audio marketplace in the country. Pandora is available through its mobile app, the web, and integrations with more than 2,000 connected products.