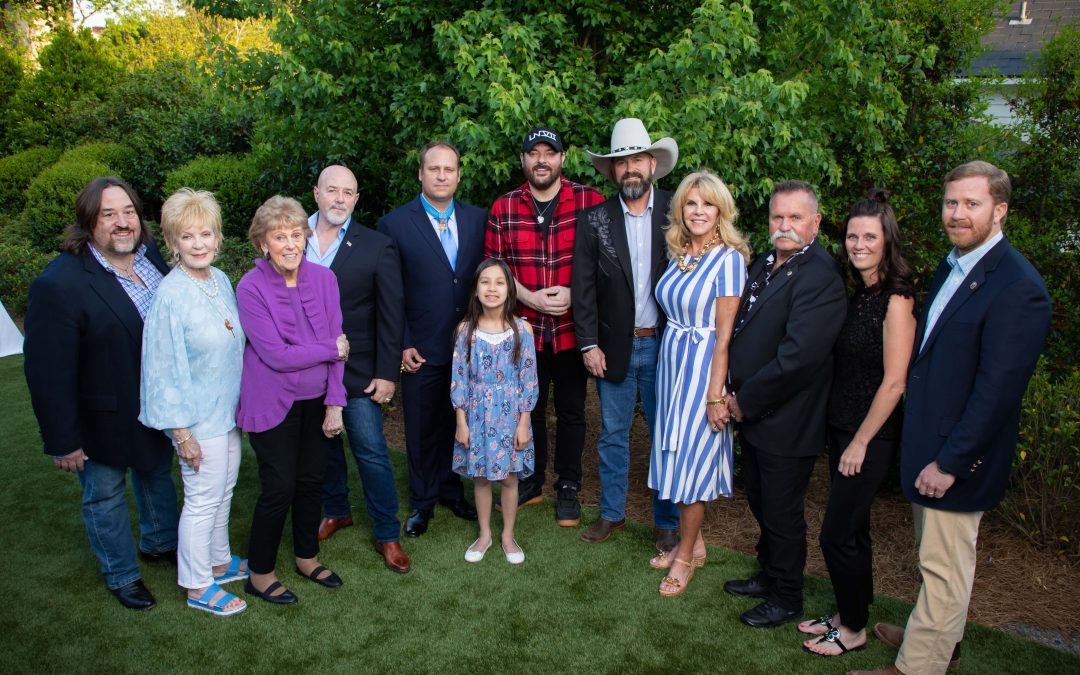 Nashville, Tenn. (July 28, 2022) — With the help of country music star Chris Young, The Charlie Daniels Journey Home Project (TCDJHP) has successfully generated over $1.2 million since the spring of 2021. Since October of last year, the veterans non-profit, founded by the late Charlie Daniels, has distributed approximately a quarter million dollars in support of the men and women who have and continue to service the U.S. military. The non-profit distributes raised funds in the spring and fall of each year.

“We attribute so much of this exciting growth to the generous heart and hard work of Chris Young, who has made an enormous impact in our fundraising efforts, as well as sharing our mission,” says TCDJHP co-founder David Corlew.

Young, a longtime supporter of the U.S. military, has performed at various TCDJHP functions which has helped generate a considerable amount of donations. Most recently he performed at a special private dinner event held in Atlanta, Georgia, where TCDJHP partnered with The Shepherd’s Men (another vets non-profit), raising thousands for the cause of helping our former men and women in uniform.

The Shepherd’s Men raises funds and awareness for the SHARE Military Initiative at Shepherd Center in Atlanta. This comprehensive rehabilitation program focuses on assessment and treatment for veterans of the Iraq and Afghanistan wars who suffer from traumatic brain injury and post-traumatic stress.

TCDJHP also focuses on combating the veteran suicide rate — 22 a day — a national epidemic that greatly troubled Daniels. Lowering and eliminating those numbers was very important to him.

“With the rate of suicide within the veterans community growing at such an alarming rate, we are prepared to stay in the fight to combat this tragic issue,” explains Corlew. “Our team feels so blessed by the continued growth of TCDJHP, and our military partners, as we continue our journey of supporting the men and women who served our country.”

The non-profit will continue its work in the medical world, donating funds for health benefits, as well as creating positive opportunities for veterans and families in the educational field. “We continue to support and honor the work that is being done at the Charlie and Hazel Daniels Veterans Center located on the MTSU campus,” continues Corlew. “Not only are they providing a plethora of educational benefits, they also offer employment choices, VA assistance, and guidance as they enter into the civilian arena.”

TCDJHP is also proud to announce a new direction in educational support by creating, for the first time, a veterans / families scholarship for The Working Ranch Cowboys Association, touching a lifestyle that Daniels loved. In the past year, TCDJHP has distributed over $60,000 in student scholarships and educational programs to the University of Tennessee and Middle Tennessee State University, among others.

In addition to teaming with The Shepherd’s Men in Atlanta, TCDJHP has also formed partnerships with Tennessee-based Operation Song, and Texas-based Warriors Heart, among others.

About The Charlie Daniels Journey Home ProjectThe Charlie Daniels Journey Home Project (TCDJHP) is a not-for profit organization that assists other not-for-profits in securing funds to help causes that benefit veterans of the United States Armed Forces. The organization was co-founded in 2014 by the late country music legend Charlie Daniels and his manager, David Corlew. Board members include Corlew, Major General Terry “Max” Haston (retired) and most recently in 2020, Hazel Daniels. Conscious of the need to assist our nation’s veterans, TCDJHP partners with organizations that do the most good, with the least overhead. Working in tandem with these organizations, TCDJHP is making a difference in the lives of American patriots. TCDJHP’s daily operations rely solely on public donations.

For more information, or to donate, visit thecharliedanielsjourneyhomeproject.org.