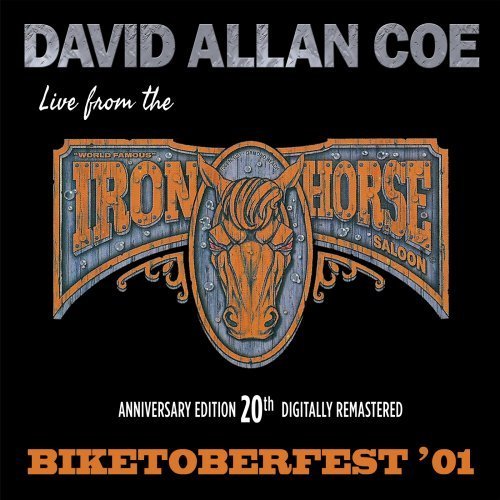 Nashville, Tenn. (April 29, 2021) — Today, Cleveland International Records (CIR) announced it will soon release live concert material from one of country music’s most eccentric and captivating outlaws, David Allan Coe. This spring, CIR, Coe’s former label, will drop a special vinyl edition of Biketoberfest 01:Live from the Iron Horse Saloon (BFD/Audium Nashville). The digitally remastered album was originally recorded live during Biketoberfest 2001 in Daytona, Beach. In celebration of its 20th anniversary, the vinyl will be available for purchase on May 21.

Produced by Coe and executive produced by Steve Popovich, Jr., the album includes his greatest hits such as “Take This Job And Shove It,” “You Never Even Called Me By My Name,” “If That Ain’t Country Part II,” “Nothing to Lose,” and the only recorded version of “I’m an Ohio Boy,” plus ten additional live songs.

“The Mysterious Rhinestone Cowboy” has placed 63 songs on the Billboard Singles charts, with his albums Greatest Hits and First Ten Years claiming platinum and gold status, garnering him a cult following of devoted outlaw country fans.

Upon its May 21 release, Biketoberfest 01 will be available for purchase via Amazon and ClevelandInternational.com. When fans pre-order a copy of the vinyl via Cleveland International Records, they will also receive a free Iron Horse CD.

7. If That Ain’t Country Part II

8. Only God Knows Why

12. Take This Job And Shove It

14. You Never Even Called Me By My Name

As a talented songwriter and charismatic performer, Coe has garnered legendary status in the world of country music, alongside his wild tales and behavior. His lyrics have spurred controversy, featuring frequent profanities, tales of drug use and sexually explicit material, gaining him the title of the ‘outlaw’s outlaw.’ Earning 63 singles on the Billboard charts, Coe has written songs for legendary artists such as: Johnny Cash, Johnny Paycheck, Tanya Tucker, George Jones, Willie Nelson, Leon Russell, Charlie Louvin, Del Reeves, Tammy Wynette, Melba Montgomery, Stoney Edwards, The Oak Ridge Boys and Kid Rock. Despite his songwriting success, Coe has never broken into the mainstream space as a solo artist, making him a true underground talent with an enthusiastic and devoted cult following.

Cleveland International Records (CIR) was founded in 1977 by industry mogul and executive, Steve Popovich, Sr. The label is known for having released various artists from all genres over its span including GRAMMY®-winning and GRAMMY®-nominated albums. CIR is most notable for the signing and launching the career of Meat Loaf and the album, Bat Out of Hell, which went on to become one of the top selling albums in music history, worldwide selling over 50 million copies. The label relaunched in 2019 with Steve Popovich Jr. at the helm, bringing both new and generational music back to the forefront.