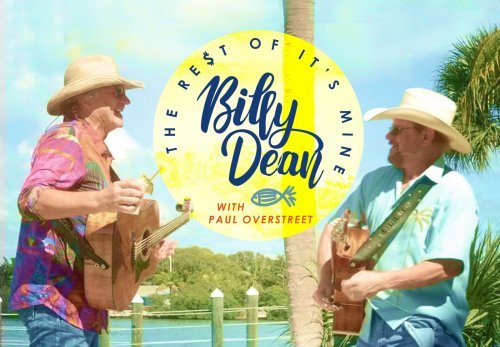 Dean explains how the song and music video came to frution:

“I wanted to work with Nashville Songwriters Hall of Fame artist Paul Overstreet because he has such a great sense of humor. We had just played a show in Key West together. On my way driving back from Key West, I saw so many empty-nesters in their RVs. It felt like they were just beginning to live life on their own terms. I told Paul I wanted to write an anthem for them and he sent me a text of a verse and chorus called ‘The Rest of It’s Mine.’ So I pulled over to the side of the road and I sent back a second verse. By the time I got home, we had a song. I sent the song to my producer, Brent Rader. He has a studio in Nashville where Paul and I recorded it the following week. We never sat down in a room together. That’s what it’s like working with a Hall of Fame songwriter. We seem to work really well together. It just clicked and we had so much fun shooting this video in Key West. That’s a good place to go to escape and that’s what we wanted people to feel when they heard this song.”

The song is the title track for Dean’s upcoming album, The Rest of It’s Mine, a 10-track collection of tunes that reflects a place very near and dear to his heart: his home state of Florida. Dean’s new project, his first country album in 10 years, drops July 22 via BFD / Audium Nashville.

“I was so touched and moved when Florida inducted me into its Artists Hall of Fame it made me terribly homesick,” says Dean. “So I moved back to reconnect with my aging mother, my high school buddies and friends and family. That all inspired the tropical flavor of this album.”