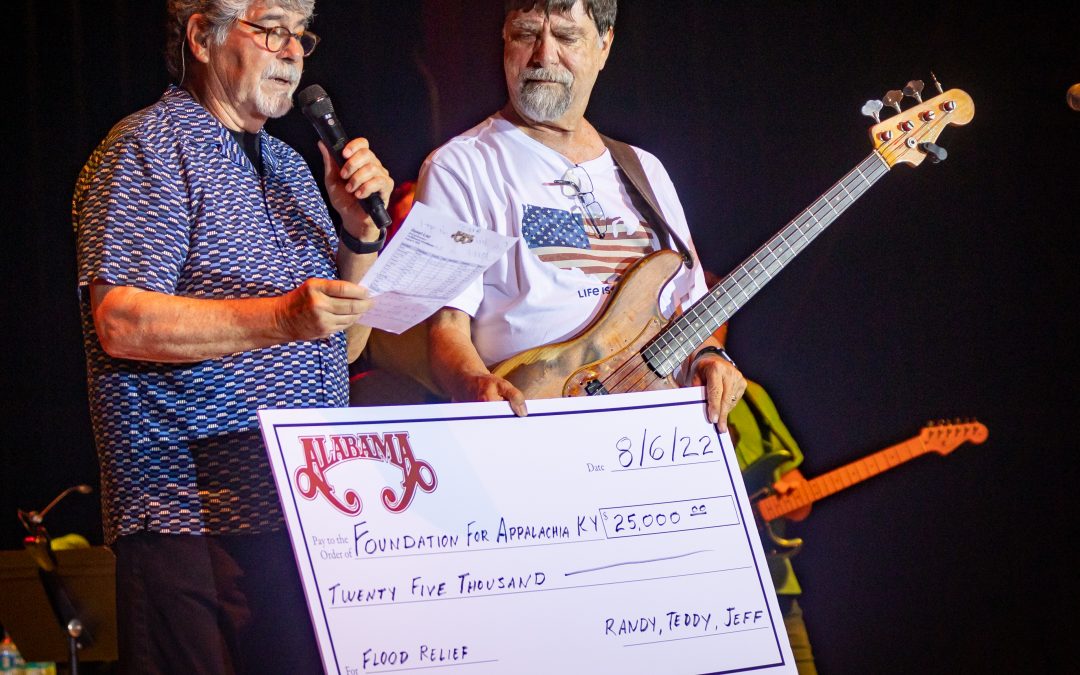 Nashville, Tenn. (August 8, 2022) — During a concert held this past Saturday, August 6, in Sharpsburg, Kentucky, Country Music Hall of Fame group ALABAMA donated $25,000 to aid those affected by the recent flooding in the Bluegrass State.

Before a packed crowd at the Barnyard Venue, ALABAMA founding members Randy Owenand Teddy Gentry presented a check to The Foundation for Appalachian Kentucky, a non-profit organization providing financial help to eastern Kentucky families, farms and businesses that are suffering as result of the catastrophic weather event.

Owen and Gentry made the donation through the June Jam Foundation, ALABAMA’s non-profit which distributes monies to other non-profit organizations and service groups.

“With all the devastation caused by the floods in eastern Kentucky, this is a very emotional time,” says Owen. “ALABAMA wanted to offer help in a small way.”

“We hurt for the loss of life and destruction caused by the floods in Kentucky,” adds Gentry. “Hopefully these funds can help the families, farmers and businesses that were affected. They are in our prayers.”

It’s been over 50 years since Jeff Cook, Teddy Gentry and Randy Owen left the cotton farms of Fort Payne, Alabama to spend the summer playing music in a Myrtle Beach, South Carolina bar called The Bowery. It’s a classic American tale of rags to riches. From humble beginnings picking cotton in the fields to international stars, ALABAMA went on to sell 80 million albums and change the face and sound of country music. Quality songs that have become the soundtrack for American life are the foundation for ALABAMA’s stellar career. The group introduced rock style guitars, lights, pyrotechnics and sounds to the country audience that has inspired many of today’s brightest country stars including Kenny Chesney, Jason Aldean and Luke Bryan. While their music continues to stand the test of time, their numbers and stats are beyond compare. Five decades since starting the band, ALABAMA has charted 43 #1 singles, including 21 #1 singles in a row, and have won dozens of CMA, GRAMMY®, and ACM Awards. They are members of the Country Music Hall of Fame, the Musicians Hall of Fame and have their own star on the Hollywood Walk of Fame. In addition, they are world-class philanthropists who have raised millions of dollars for various charities.