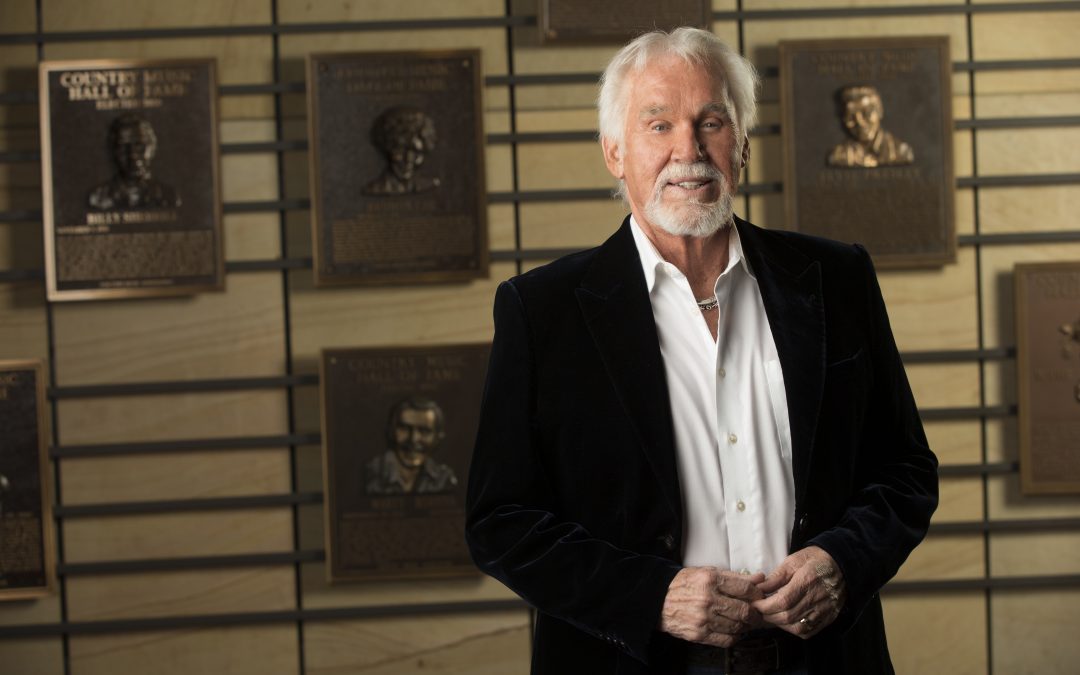 Nashville, Tenn. (March 21, 2020) — The country music community is mourning the loss of Country Music Hall of Fame member Kenny Rogers. The music icon passed away last night at the age of 81 years old.

“Kenny Rogers was a pioneer in the music world. He was a friend of ALABAMA and will be missed by all. Rest in Peace.”
-Jeff Cook, ALABAMA

“Last night we lost a friend and one of the classic voices that easily melted county, rock and pop together in a way no one had done before. We will certainly miss you Kenny.”
-Teddy Gentry, ALABAMA

“With sadness I heard about the passing of a great Hall of Famer. Kenny Rogers was a special treasure to country music and the world. He will be missed by all.”
-Randy Owen, ALABAMA

“Thank you Kenny Rogers for being a part of our lives for so long. Your songs are woven into the fabric of our memories — classics, that will live on in the musical heart of a world that will miss you so much. Rest in peace, Gambler.”
-Charlie Daniels

“Kenny Rogers was truly an artist of the highest caliber. As a singer, songwriter, entertainer, and actor, he opened doors and enhanced the careers of many other artists just by recording a song with them. His voice and smooth singing style enabled him to move in and out of different musical genres like walking from one room to the next. But music was not his only creative outlet. He was also an amazing photographer. Rest well my brother, you gave us a lot in this life!”
-Ricky Skaggs

“Kenny was a nice man and a great entertainer who had a way of making a song all his own. He will be missed.”
-Ray Stevens

“I have lost an old friend and the world has lost a consummate entertainer. ‘The Gatlin Boys’ did hundreds of shows with ‘Kenneth’ as we called him. More often than not, I watched from the wings as he masterfully strutted and fretted his hour upon the stage. Last night, ‘the Gambler he broke even.'”
-Larry Gatlin

“Kenny was one of the few that successfully crossed genres. I’ve been a fan from a long time back, and we will all miss his voice and style.”
-John Anderson

“As long as I can remember there has been Kenny Rogers. It began the moment daddy brought home his ‘First Edition’ album with the soon to be hit single ‘Ruby Don’t Take Your Love to Town.’ That song put daddy on the map as a songwriter, and Kenny Rogers became a legend in the making. And I loved that voice! Many years later as a fledgling entertainer, I got to open for him and watch a true master at work. A dream come true was getting to sing with him. Totally unreal. Another special moment was having Kenny Rogers, the photographer, take one of my favorite portraits of dad and I. Ever. A true renaissance man. Kenny, thank you for a lifetime of music and memories. Sending deepest sympathies to his family.”
-Pam Tillis

“To one of the old guys that taught me so much, God Bless you, Kenny. Keep an eye out for Larry Butler.”
-Doug Gray, The Marshall Tucker Band

“Kenny Rogers was not only my friend, he was my mentor. The void he leaves will be impossible to fill. Countless memories ‘Through the Years’ will never leave the people’s lives he so graciously touched. Rest in peace, dear friend. My thoughts and prayers go out to Wanda and his beautiful family.”
-T.G. Sheppard

“Kenny Rogers was a true southern gentleman. He brought sophistication, elegance and class to country music. He broke down many barriers and paved the way for so many artists. He taught me the importance of work ethic. My heart goes out to the entire Rogers family.”
-Billy Dean

“The world has lost a legend and a great man. He was one of a kind and such an amazing talent. Prayers to Kenny’s family from ours.”
-Aaron Tippin

“I am deeply saddened by the news of Kenny Rogers’ passing. I am honored to say that I had the privilege and pleasure of working with Kenny on many occasions. He was always so kind, respectful, and uplifting to me. Being chosen by Kenny to perform at his Songwriters Hall of Fame induction in New York City years ago was one of the great honors of my career. Whenever I asked for his help at a charity event or show, Kenny always said yes. He was a wonderful, kind, loving, human being and a truly amazing artist who transcended all genres for every generation. Kenny will never be forgotten. I’ll forever be grateful and humbled to have known him and shared the stage with him. There will never be another Kenny Rogers. May God be with you, my friend.”
-Collin Raye

“In a time such as the days we are living through, Kenny Rogers embraces a known bright tomorrow. He left the pain in this world and has moved onto the shores of the everlasting. To his family we send our deepest condolences.”
-Marty Raybon, Shenandoah

“Kenny Rogers set the gold standard for the music industry. Restless Heart was honored to tour with him in our early years, and we’ll never forget his kindness and encouragement. We were fortunate to perform with him again in 2013 and he still had the easy going manner, the storytelling magic and the unforgettable voice that made him a global superstar. We were inspired by his artistry and comforted by his humanity. Our sincere condolences go out to his family and loved ones.”
-Dave Innis, Restless Heart

“Kenny’s songs, his voice and his style made a huge impact on me. He single-handedly changed the sound of the radio like no one else has since. What a wonderful human being as well. Thank you for your music, Kenny Rogers. You will be missed.”
-Larry Stewart, Restless Heart

“Kenny was always very kind to me. My mother was one of his biggest fans and he was very gracious to her as well. We will surely miss that unmistakable voice.”
-Darryl Worley

“What a super legend. He was always nice to me. God bless the “Sweet Music Man.”
-Sammy Kershaw

“The passing of Kenny Rogers is a great loss to the entertainment industry, but his musical legacy will endure forever.”
-Leroy Van Dyke

“Kenny was in Branson for a time with me. What a great talent and a great legend in our business. He was always so nice to me. I always respected his talents so much.”
-Moe Bandy

“I was deeply saddened by the news of Kenny’s passing. Early on, I was profoundly influenced by his work in ‘The First Edition.’ For me it represented an early country rock musical persona done in precise and ultimately professional style. He went on to stardom of staggering heights and remained gracious through it all. An extremely rare talent!”
-Henry Paul, BlackHawk / The Outlaws