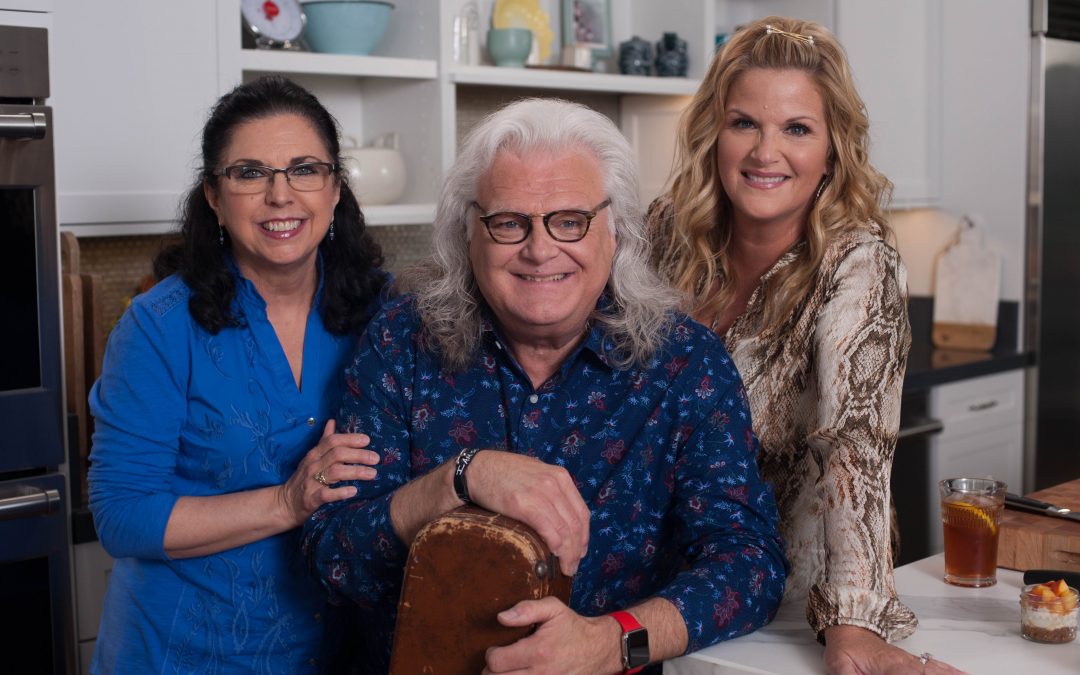 Nashville, Tenn. (November 7, 2019) — On this weekend’s edition of Trisha’s Southern Kitchen (Food Network), show host Trisha Yearwood invites her longtime friends and fellow artists, Ricky Skaggs, and his wife, Sharon White, over for a meal filled with laughter and song.

“Trisha is one of the sweetest people I’ve ever known,” says Skaggs. “Getting to spend the afternoon just kicking back, laughing, and singing with her and my wife Sharon, and oh my goodness, eating her fabulous cooking was one of the best days I can ever remember! It was like going home to see family and as we do in the south, she sent home leftovers!”

During the show they’ll cook beloved southern comfort foods and reflect on their shared decades-long careers in country music. The menu includes a spin on the classic PB and J, Cherry and Boiled Peanut Bruschetta. They also make Roasted Sweet Vidalia Pork Loin, Collard Cobbler and a final nod to the south, Mini Georgia Peach Cheesecake, for dessert.

“I had a such a wonderful time doing Trisha’s Southern Kitchen,” adds White. “Trisha is just the best hostess, and the meal she made for Ricky and me was amazing! Then, to cap it off, we sat on the porch and sang together! The entire afternoon was so much fun!”

About Sharon White
Sharon White is a member of beloved country-gospel family band, The Whites, and has been making music alongside her father Buck and sister Cheryl for more than four decades.  They originally began as a Bluegrass group, but the family trio became well known for their string of Country hits in the 1980s, including “Hangin’ Around,” “Give Me Back That Old Familiar Feeling,” and “Pins and Needles.” The Whites are Grand Ole Opry members and combine a respect for – and mastery of – traditional country and bluegrass with a refreshing style in each of their performances.  They were involved in the 2001 hit movie and soundtrack, O Brother, Where Art Thou?, and have gone on to win multiple awards, including GRAMMY®, CMA and Dove Awards, among others. In 2008, proud Texans Buck, Sharon, and Cheryl received the ultimate honor from their home state with their induction into the Texas Country Music Hall of Fame. Her most recent release, Hearts Like Ours, was recorded with her husband, Ricky Skaggs, on their first-ever duet studio album, and features specially selected country love songs. She also performed dates with her husband along with guitar legend Ry Cooder on the critically-acclaimed “Cooder-White-Skaggs” tour. The Whites have exemplified true artistry and defied genre stereotypes. Their unique blend of bluegrass, country, folk, gospel and Texas swing paired with their top-notch instrumental work and striking family harmony (on and off stage) has set them apart, entertaining and inspiring millions of listeners worldwide.