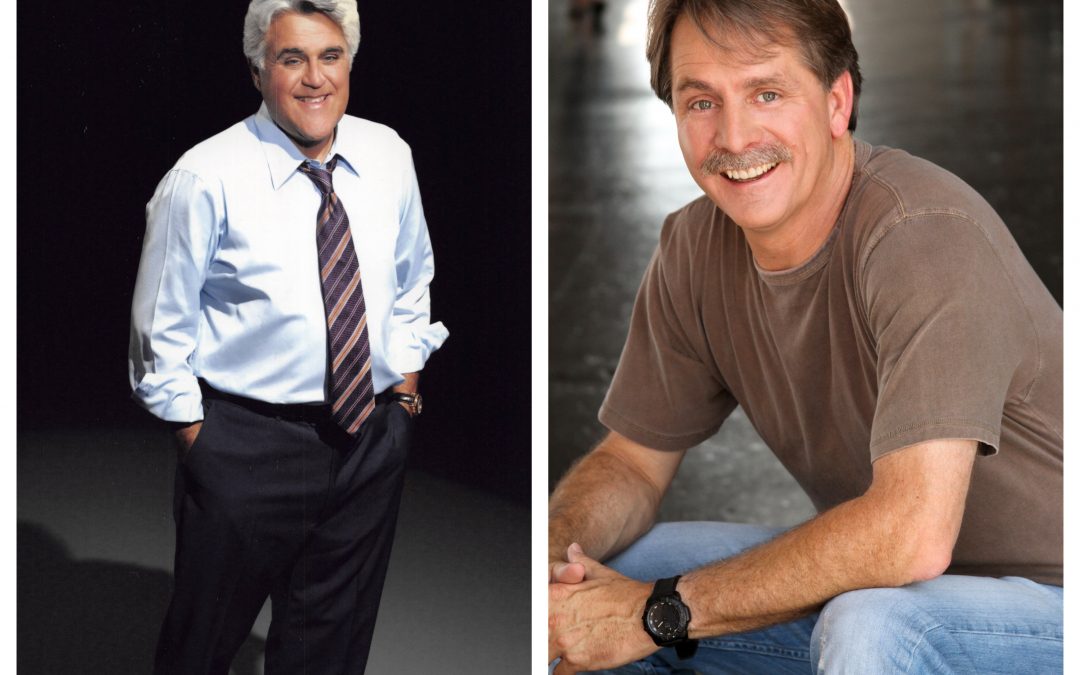 Nashville, Tenn. (November 7, 2018) – During next year’s 2019 Nashville Comedy Festival, iconic American comics Jay Leno and Jeff Foxworthy are set to take the stage for a ‘once-in-a-lifetime’ event on the historic stage of The Opry House. This special event is exclusive to Nashville, as it will be the first time and only place to see both artists share the stage. The legendary “clean comedy” entertainers will perform at The Opry House on Sunday, April 14.

“These two legends, Jay Leno and Jeff Foxworthy, have never shared a stage together,” notes Outback Concerts’ David Bastidos. “We couldn’t be more excited to be the ones to make it happen and bring these two comedy icons to the great city of Nashville for our annual Nashville Comedy Festival.”

Read more HERE from The Tennessean.

Leno and Foxworthy will take The Opry House stage at 6 p.m. CT. Tickets go on-sale this Monday, November 12 at 10 a.m. CT and will be available for purchase at Ticketmaster.com, the Opry House box office, the Ryman Auditorium box office, all Ticketmaster outlets or by phone at 1-800-745-3000.

The Opry House is located at 2805 Opryland Drive.

Acclaimed late TV show host, admired stand-up comedian, best-selling children’s book author, much-in-demand corporate speaker, TV and movie voice-over artist, pioneering car builder and mechanic, and philanthropist Jay Leno is widely characterized as “the hardest working man in show business.” Leno’s late night television ratings domination included two decades as the host of the #1-rated “The Tonight Show with Jay Leno” – he never lost a ratings year in which he served as host. Leno currently produces and is host of the CNBC TV series “Jay Leno’s Garage” now in its third season. The show explores the world of cars, never forgetting that it’s the people behind the wheel who provide the real stories. The series debuted in October 2015 and delivered CNBC’s most-watched first season in network history. New episodes of “Jay Leno’s Garage” can be viewed on CNBC throughout the year. When not on TV, Leno performs more than 100 stand-up shows annually across the country and internationally; participates in numerous charity and corporate events, does voice-overs for animated series, pens children’s books, and writes a monthly column in various automotive magazines. Leno is the recipient of many honors, including Emmy, People’s Choice, and TV Guide awards, Harris Poll selection as most popular star on television, the Hasty Pudding Award at Harvard University, The Mark Twain Prize, a star on Hollywood’s Walk of Fame, and being the first person to drive the pace car of all major NASCAR events.

Jeff Foxworthy is one of the most respected and successful comedians in the country. He is the largest selling comedy-recording artist in history, a multiple GRAMMY® Award nominee and best-selling author of more than 26 books. In 2014, he was inducted into the Georgia Music Hall of Fame. Widely known for his redneck jokes, his act goes well beyond to explore the humor in everyday family interactions and human nature, a style that has been compared to that of Mark Twain. Foxworthy has his own comedy channel “Jeff and Larry’s Comedy Roundup” on SiriusXM, showcasing the best in great American comedy. Listeners can hear hilarious material from Foxworthy, as well as comedy from some of his personal favorite comedians.

Outback Concerts is an independent, full-service concert and comedy promoter based in Nashville, TN. In addition to producing hundreds of concerts and events each year, ranging from clubs to arenas across the country and Canada, Outback Concerts also produces the Nashville Comedy Festival. Outback Concerts President Mike Smardak was a 2011 inductee of the IEBA Hall of Fame. In November of 2016, Mike Smardak was honored with a distinguished NATD Award alongside Nashville’s most recognized members of the entertainment industry. In March of 2018, Smardak was honored by the T.J. Martell Foundation with the Tony Martell Outstanding Entertainment Achievement Award. Promoter Andrew Farwell was voted IEBA Rookie of the Year in 2014.