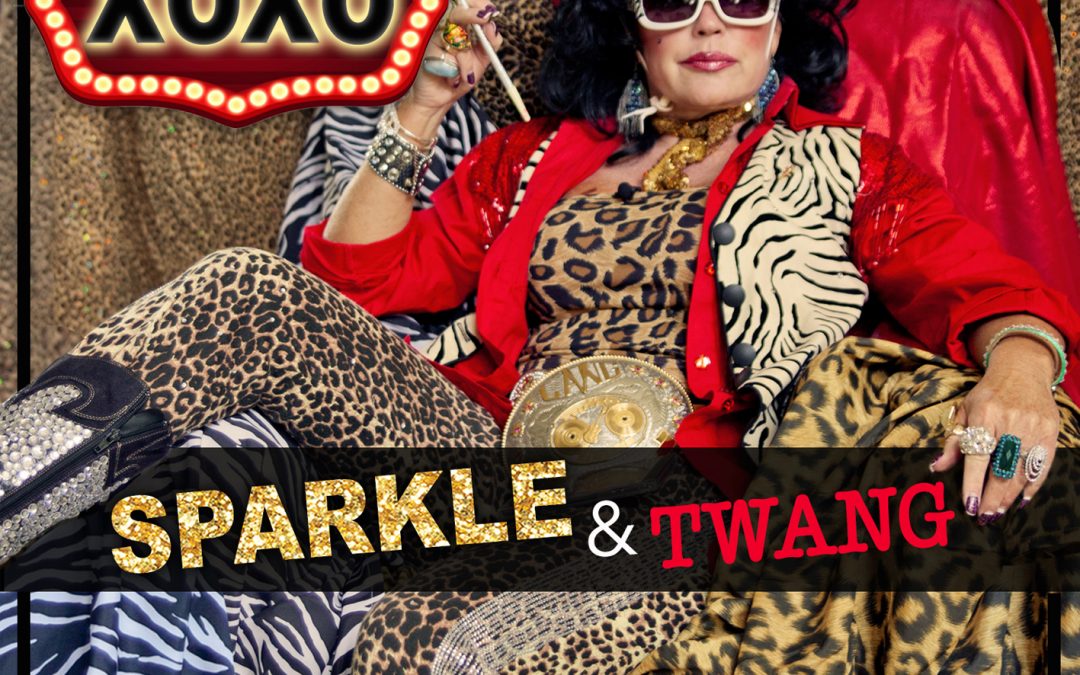 The character XOXO was originally created by Lang as a creative outlet while battling breast cancer. With her extra “bling,” big hair, over-the-top makeup and a biting wit, XOXO’s unique style of comedy has something for everyone. Sparkle & Twang with XOXO episodes will feature the comedienne’s own performances along with skits, advice and “on-the-street” segments. Other artists featured in season one include Ricky Skaggs, Lorrie Morgan, William Lee Golden of The Oak Ridge Boys, and TG Sheppard. XOXO has previously appeared on SiriusXM’s Blue Collar Comedy and Huckabee.

“I’ve always believed that laughter is the best medicine and creating this crazy character brought me through some of my darkest times,” explains Lang. “I am thrilled to be partnering with Heartland, so I can share some of XOXO’s adventures with the viewers and take them on a fun journey. I am flattered that some people compare XOXO to a modern day Minnie Pearl or a female Larry the Cable Guy but unlike them, XOXO is not just a comedian, she also writes and sings her own songs and parodies.”

Olivia Newton-John, Lang’s close friend, is a huge fan of XOXO. “I have always been a supporter of Kelly Lang’s music, and enjoyed recording a duet with her before, but I feel that her comedic character XOXO is where she shines even brighter,” she told The Tennessean.

“XOXO is hilarious and she brings a smile to my face just looking at her. She plays this character so seamlessly well, you can’t see where Kelly begins and XOXO ends.” Terri Coyle, Heartland’s Director of Programming, said, “From her disastrous interactions with country celebrities to her relationship advice garnered throughout her seven marriages, there’s nothing out there quite like XOXO. We’re thrilled to partner with Kelly Lang to bring more laugh-out-loud hilarity to TV viewers everywhere.”

Kelly Lang spent most of her childhood and youth growing up in the music business as the daughter of Conway Twitty’s road manager. She has performed on Star Search, Nashville Now, Music City Tonight, and the stage of the Grand Ole Opry. In addition, she has shared the stage many times with music icon, Sir Barry Gibb. Over the past few years, she has recorded two critically-acclaimed albums of classic love songs. One of those albums, Throwback, includes collaborations with Olivia Newton-John, Lee Greenwood and Paul Shaffer. Obsession, her most recent album, is available for purchase now at kellylang.net. Lang is married to country music legend TG Sheppard. The singer-songwriter also recently resurrected her hilarious alter-ego, XOXO. Lang created the character in 2006 as an outlet for coping with her battle with breast cancer. Today she is cancer free.

Luken Communications offers diverse, family-friendly programming with its collection of networks delivered via a blend of over-the-air, cable and satellite television. The current network offerings include Retro TV, The Heartland Network, Rev’n, The Action Channel and The Family Channel. Luken Communications’ flagship Retro TV was one of the first digital broadcast networks launched in 2005.