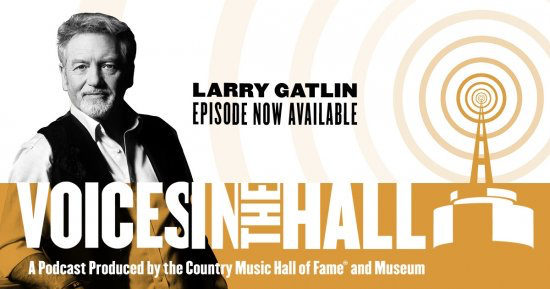 Nashville, Tenn. (May 14, 2019) — GRAMMY® Award-winning and platinum-selling country music legend Larry Gatlin is featured on the latest episode of Voices in the Hall, a new podcast produced by the Country Music Hall of Fame® and Museum.

As one of country music’s most prolific songwriters, Gatlin has self-penned and recorded more than 30 Top 40 hits including “All the Gold in California,” and “Houston (Means I’m One Day Closer to You).” He was encouraged and inspired by greats including Johnny Cash, Fred Foster, and Kris Kristofferson, and he sang in rich harmony with his brothers Steve and Rudy, collectively, the Gatlin Brothers. On this episode of Voices in the Hall, Gatlin talks about his early days, fame and his creative influences.

“Gatlin’s years in the spotlight involved great achievement and some missteps, and he is as honest about the latter as he is proud of the former,” says Museum Senior Director and podcast host Peter Cooper.

“I’m not sure that he’s ever mellowed, but the Larry Gatlin of today blends brash proclamation with honest reflection, and his fierce intellect and unabashed love of creation make him one of the most enjoyable people to talk with in Nashville,” Cooper adds.

Listen to Gatlin’s Voices in the Hall episode HERE.

Next year marks 65 years of music for Larry, Steve & Rudy: The Gatlin Brothers (the trio began singing when Larry was six, Steve was four and Rudy was two). With more than six decades of singing under their belts, the brothers show no signs of slowing down. In addition to performing nearly 100 live concert dates each year, Gatlin hosts Opry Country Classics live from Nashville‘s Ryman Auditorium each Thursday night in the spring and fall.

On Thursday, May 2, Gatlin celebrated his 71st birthday. Gathering with family and friends backstage, the Grand Ole Opry surprised him with a cake.

Additionally, Gatlin was recently recruited by the Country Music Hall of Fame & Museum as a featured songwriter for its Outlaws, Tales & Tunes program. Gatlin joined acclaimed singer-songwriters Buddy Cannon and Marshall Chapman for the 90-minute session that featured the three taking turns performing songs and sharing stories from the road and beyond.

The close family harmonies of Larry, Steve & Rudy: The Gatlin Brothers have given the trio a signature sound that led to country classics like “All the Gold in California” and “Houston (Means I’m One Day Closer to You).” The brothers won a GRAMMY® for their 1976 breakthrough hit, “Broken Lady,” and reached #1 with several other songs soon thereafter. Along with five career nominations for the ACM Vocal Group, the Gatlin Brothers picked up three 1979 trophies: Single of the Year (“All the Gold in California”), Album of the Year (Straight Ahead) and Male Vocalist of the Year for Larry Gatlin. The brothers were also nominated for multiple CMA Awards including Vocal Group of the Year, Single of the Year, and Entertainer of the Year. Larry Gatlin has written songs recorded by Elvis Presley, Glen Campbell, Barbra Streisand, Johnny Cash, Kris Kristofferson, Dottie West, Roy Orbison, Barry Gibb and countless Gospel artists including the Gaither Vocal Band, the Booth Brothers, the Isaacs and many more. After more than 60 years of music, the brothers continue to perform nearly 100 live concert dates each year.