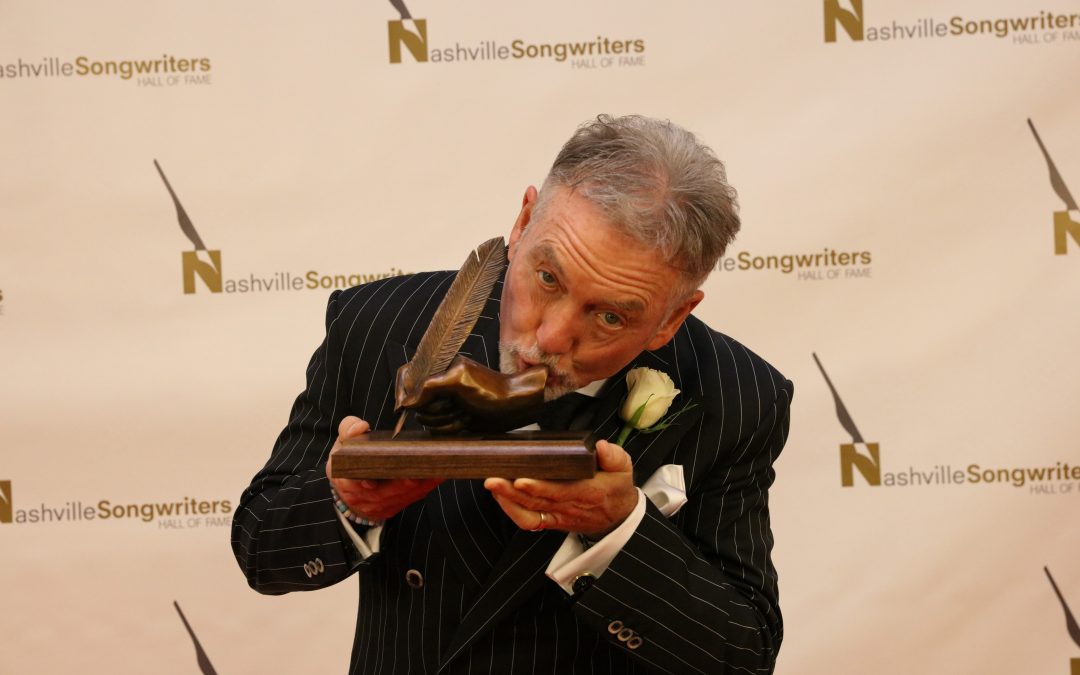 “I am humbled and honored to be a member of the Nashville Songwriters Hall of Fame,” says Gatlin. “Having family and friends there with me was a blessing. Things happen in God’s time and mostly fair winds have blown over me.”

During his own acceptance speech, Yoakam praised Gatlin’s songwriting. “It’s an honor for me to be in this class tonight with everybody but especially, as a fellow performer, being inducted with Larry Gatlin,” said Yoakam. “I think he stands alone as one of the more eloquent singer-songwriters ever in country music.”

Over the course of his career, Gatlin has written hundreds of songs, including seven No. 1 hits for the Gatlin Brothers: “All the Gold in California,” “Houston (Means I’m One Day Closer to You),” “Broken Lady,” “Statues Without Hearts,” “I Don’t Wanna Cry,” “Night Time Magic,” and “I Just Wish You Were Someone I Love.” His songs have been recorded by many household names including Elvis Presley, Barry Gibb, Glen Campbell, Barbra Streisand, Johnny Cash, Kris Kristofferson, Dottie West, and Roy Orbison. He appears on several “best of” songwriter lists. With 35 songs, he’s currently tied at No. 4 with Tom T. Hall for the most self-penned Top 40 Billboard hits as a country artist. The pair follow Merle Haggard, Marty Robbins, and Hank Williams Jr.

About Larry Gatlin
The close family harmonies of Larry, Steve & Rudy: The Gatlin Brothers have given the trio a signature sound that led to country classics like “All the Gold in California” and “Houston (Means I’m One Day Closer To You).” The brothers won a GRAMMY® for their 1976 breakthrough hit, “Broken Lady,” and reached #1 with several other songs soon thereafter. Along with five career nominations for the ACM Vocal Group, the Gatlin Brothers picked up three 1979 trophies: Single of the Year (“All the Gold in California”), Album of the Year (Straight Ahead) and Male Vocalist of the Year for Larry Gatlin. The brothers were also nominated for multiple CMA Awards including Vocal Group of the Year, Single of the Year, and Entertainer of the Year. Larry Gatlin has written songs recorded by Elvis Presley, Glen Campbell, Barbra Streisand, Johnny Cash, Kris Kristofferson, Dottie West, Roy Orbison, Barry Gibb and countless Gospel artists including the Gaither Vocal Band, the Booth Brothers, the Isaacs and many more. After 60+ years of music, the brothers continue to perform nearly 100 live concert dates each year.