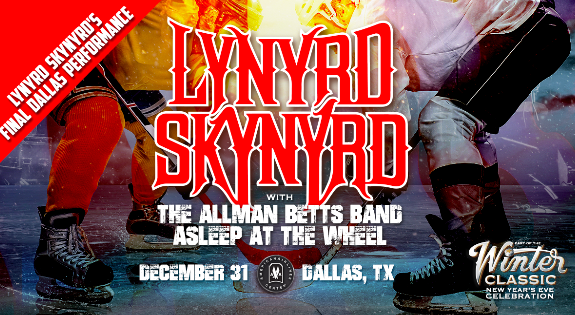 Nashville, Tenn. (October 23, 2019) — Rock icons Lynyrd Skynyrd will ring in the new year with a night of classic rock on Tuesday, December 31 at American Airlines Center in downtown Dallas, Texas. The concert will mark their final performance in Dallas as part of their wildly successful The Last of the Street Survivors Farewell Tour.

Skynyrd will kick-off the new year with special guests The Allman Betts Band and Asleep At The Wheel as part of the Winter Classic Week-Long Celebration.

Hot off their highly acclaimed The Last of the Street Survivors Farewell Tour that took the band across the country and around the globe, Lynyrd Skynyrd will make a special stop in Dallas to bid a final farewell to 2019. Praised as one of Rolling Stone’s 100 Greatest Bands of All Time, Lynyrd Skynyrd’s career has spanned more than 40 years and includes a catalog of more than 60 albums with over 30 million units sold. The legendary rockers are best known for the Platinum-certified “Sweet Home Alabama,” self-proclaimed signature song “Free Bird,” and everlasting hits such as “Simple Man,” “Gimme Three Steps,” “What’s Your Name,” “Call Me The Breeze,” “You Got that Right,” and more.

Opening the night will be legendary Austin, Texas band Asleep At The Wheel. The nine-time Grammy® Award-winning group has released more than 25 albums and is one of the most celebrated Texas “Outlaw” Country bands of the last fifty years.

The New Year’s Eve concert is produced by Blackbird Presents and promoted by Outback Presents.

About Lynyrd Skynyrd
Original members Ronnie Van Zant, Bob Burns, Allen Collins, Gary Rossington, and Larry Junstrom formed the band in 1964, originally known as My Backyard, the band changed to its famous name in the early 1970s, and became popular in the Jacksonville, FL area, where the original members were from. They signed with Sounds of the South Records in 1972 and released their self-titled disc the following year. The album that featured “Free Bird,” arguably the most-recognized single in the Southern Rock genre, has sold more than 2 million units since its release. Later down the road, the band recorded iconic tracks “Sweet Home Alabama” and “What’s Your Name.”

The band’s story took a tragic turn in October 1977 when a plane crash took the lives of Van Zant, Steve Gaines, backup singer Cassie Gaines, and several of their road crew. The band took a decade-long hiatus before reuniting for a tour and live album, Southern by the Grace of God. Since then, the band has toured and recorded extensively, with their most recent release being Last Of A Dyin’ Breed. The band’s current line-up includes original member Rossington, Johnny Van Zant, Rickey Medlocke, Mark “Sparky” Matejka, Michael Cartellone, Keith Christopher, Peter Keys, Dale Krantz Rossington, and Carol Chase. The band was inducted into the Rock and Roll Hall of Fame in 2006.

About Blackbird Presents
Blackbird Presents the worldwide leader in the production of large-scale concert events, broadcast specials, TV series, music festivals, and tours.  Blackbird’s recent concerts, broadcast specials, and releases include Willie: Life & Songs Of An American Outlaw, Imagine: John Lennon 75th Birthday Concert, One More For The Fans! Celebrating The Songs & Music of Lynyrd Skynyrd, Outlaw: Celebrating The Music Of Waylon Jennings, All My Friends: Celebrating the Songs & Voice of Gregg Allman, the latter of which earned a 2014 GRAMMY® Award nomination for Gregg Allman and Taj Mahal’s awe-inspiring performance of “Statesboro Blues.”

Blackbird Presents is also the creator and producer of The Outlaw Music Festival Tour, in partnership with Willie Nelson.