Maze Featuring Frankie Beverly, The Whispers and The Manhattans to Perform at Nashville’s Bridgestone Arena on October 26 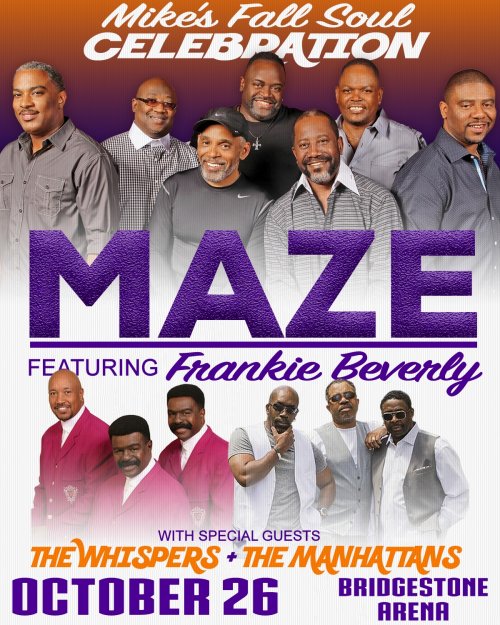 Nashville, Tenn. (July 22, 2019) — “Mike’s Fall Soul Celebration” starring Maze featuring Frankie Beverly, The Whispers, and The Manhattans is coming to Bridgestone Arena on Saturday, October 26. This soul-induced lineup will come together in a rare performance for a night of unforgettable hit songs and memories.

Tickets for the celebration go on-sale this Friday, July 26 at 10:00 am/CT. Purchase tickets online at ticketmaster.com or at the Bridgestone Arena box office.

For nearly three decades, Maze featuring Frankie Beverly has created music that is original, innovative and instantly recognizable. After opening on tour for the late Marvin Gaye, the group began an incredible journey that has encompassed gold albums including “Golden Time Of Day,” “Inspiration,” “Joy and Pain,” “Live In New Orleans,” “We Are One,” “Can’t Stop The Love” and “Live In Los Angeles.” Hits from the groundbreaking albums allotted the group 24 R&B Top 40 singles including “While I’m Alone,” “Golden Time Of Day,” “Southern Girl,” “Runnin’ Away,” “Before I Let Go,” “Back In Stride,” “Too Many Games,” “Can’t Get Over You” and “Silky Soul.” Maze featuring Frankie Beverly has continuously toured for over 25 years. The band’s current lineup includes Calvin Napper (drums), Larry Kimpel (bass), Jubu (guitar), Carl Wheeler (keyboards), Vance Taylor (keyboards), and one of the original members Roame (congas and background vocals).

One of R&B music’s most beloved and consistently popular vocal groups, The Whispers, began their legendary and timeless career in 1963. Twin brothers Walter and Wallace Scott joined with friends Nicholas Caldwell, Marcus Hutson, and Gordy Harmon to form a local singing group. They perfected their tight harmonies on the street corners in the Watts section of Los Angeles and in nightclubs in the in the San Francisco/Oakland Bay Area. By 1971, Gordy Harmon decided to leave the group and was replaced by Leaveil Degree who had previously sung with “The Friends of Distinction.” The Whispers produced a string of hits over the next two decades and emerged as the leading romantic singers of their generation, racking up one gold album after another and charting numerous R&B hits throughout the seventies and eighties. The Whispers were the first artists featured on the newly formed Soul Train label (co-owned by the TV show’s creator and host Don Cornelius and entrepreneur Dick Griffey). They gained national attention with their seventies albums, “One For The Money,” “Open Up Your Love,” and “Headlights” producing two singles that graced Billboard’s Top 20 R&B Charts: “(Let’s Go) All the Way” and “(Olivia) Lost and Turned Out.”

For more information on The Whispers, visit thewhispers.com.

The Manhattans were originally Winfred “Blue” Lovett, Richard Taylor, Kenny Kelley, George “Smitty” Smith and Sonny Bivins. Blue and Smitty were out front as the group’s strong lead singers. Blue was also the group leader and an outstanding songwriter whose compositions with producer Joe Evans gave the group a string of hits on Carnival Records during the mid 1960s. THE MANHATTANS moved to Columbia Records in 1973 where they collaborated with producer Bobby Martin on a string of hit ballads including, “There’s No Me Without You,” “We Never Danced To A Love Song” and “Hurt.” The most notable of these ballads was Blue Lovett’s “Kiss And Say Goodbye,” a platinum selling #1 pop and R&B hit in 1976. In that same year, The Manhattans teamed up once again with producer Randazzo to record “Feels So Good,” “You’re My Life” and “There’s No Good In Goodbye.” In 1977, they performed at President Jimmy Carter’s Inaugural Ball and since then have received their share of platinum and gold singles, albums, and other industry kudos; most notably a 1980 Grammy for “Shining Star.” In 1999, the band was inducted into the Rhythm and Blues Hall of Fame.  In 2003, they released their first studio album in fifteen years featuring the beautiful ballad “Turn Out The Stars” which became one of the year’s best songs. In 2012, The Manhattans celebrated their 50th anniversary.

For more information on The Manhattans, visit letsjustkissandsaygoodbye.com.