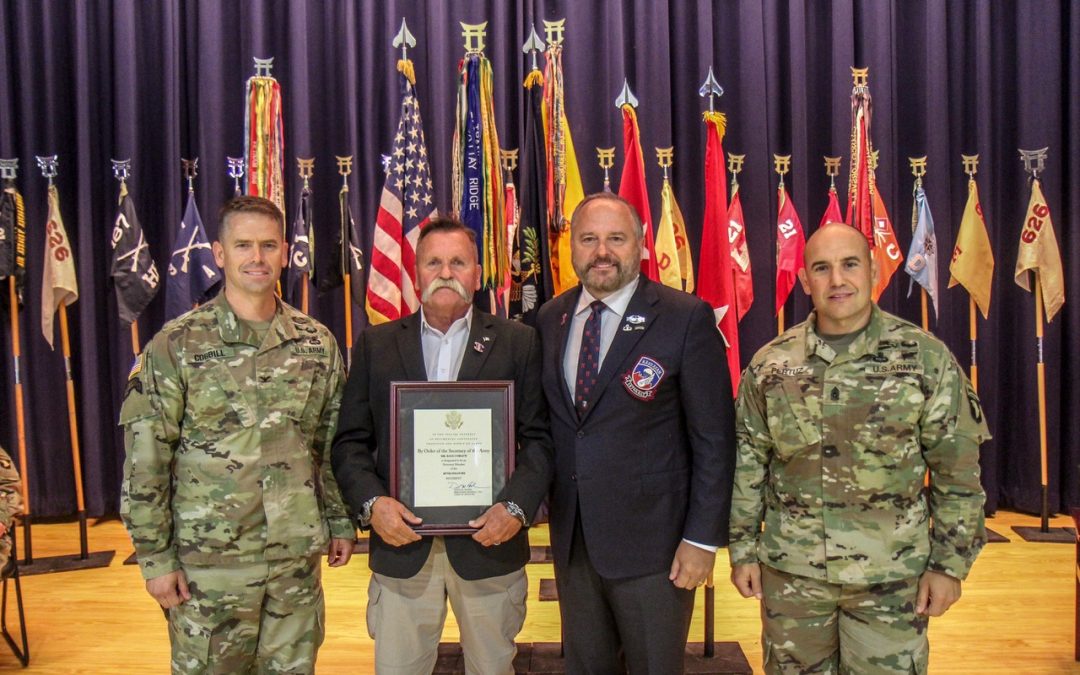 Nashville, Tenn. (August 22, 2018) — On Thursday, August 16, Nashville music industry veteran David Corlew was honored by U.S. military personnel at Fort Campbell, KY where he was named an Honorary Member of the 187th Airborne Infantry Regiment (also known as the “Rakkasans”).

“It was my pleasure to induct Mr. David Corlew as an Honorary Member of the 187th Infantry Regiment,” says Col. John P. Cogbill, Commander, 3rd Brigade Combat Team, 101st Airborne Division (Air Assault). “His dedication to the welfare of veterans, particularly at Middle Tennessee State University, is an example others should be inspired by. We’re fortunate to now call Mr. Corlew a ‘Rakkasan’ for life.”

Membership of the regiment is a significant accomplishment for those chosen. Each year, dozens of packets are reviewed by standing members, as well as by the Office of the Chief of Infantry at Fort Benning, Georgia. Those chosen for membership have been determined to best demonstrate the qualities required of an honorary member of the regiment.

“Being designated as an Honorary 187th Airborne ‘Rakkasan’ is an accolade I never expected, not in my lifetime. I am honored beyond words,” notes Corlew. “Serving those who serve, and have served, has become a life mission for me. The transition from military life, to civilian life, truly is and will continue to be a difficult journey. Some more than others. I plan to assist in that process as long as God gives me the strength to do so. It is the least I can do for those who signed up to protect us from the evil tyranny that faces our great nation.”

For more than 30 years, Corlew has managed the career of Country Music Hall of Famer Charlie Daniels. In 2014, Corlew and Daniels founded The Journey Home Project (TJHP), a not-for profit organization that assists other not-for-profits in securing funds to help causes that benefit veterans of the United States Armed Forces. Conscious of the need to assist our nation’s veterans, TJHP has set out to partner with organizations that do the most good, with the least overhead. Working in tandem with these organizations, TJHP is making a difference in the lives of American patriots. In February of 2017, TJHP partnered with Middle Tennessee State University (MTSU) to open the Daniels Center. The facility is the largest and most comprehensive veterans center on any Tennessee higher education campus. It enables the campus’ 900-plus student-veteran population to have a one-stop shop to meet a variety of academic needs. The 3,200-square-foot center is located in the Keathley University Center, right in the heart of the MTSU campus. The center is a place for MTSU’s student veterans to study, to gather and to get help from fellow veterans, who serve as peer advisers and sponsors. The Transitioning Home Office assists student veterans — or any student — in making the transition from being a college student to getting their career underway.

Last September, Corlew was awarded the Distinguished Patriot Medal by the Tennessee Military Department. The plaque given to Corlew by Major General Terry “Max” Haston states the award was bestowed upon Corlew “For his unprecedented support of our Armed Forces, especially the soldiers and airmen of the Tennessee National Guard.” His efforts and service as one of the premier leaders in the music industry, not only in Nashville, but throughout the country, have inspired the industry to take up the cause and become ardent supporters of our military forces. His passion, initiative, and foresight in founding TJHP continues to be one of the most effective ways to assist and support our troops. Corlew is also an Honorary Life Member of the Special Forces Association, Chapter 38.

For more information on The Journey Home Project, visit thejourneyhomeproject.org.