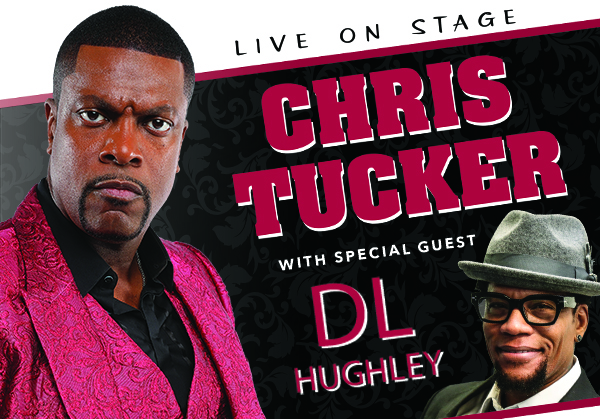 Nashville, Tenn. (August 27, 2018) — Internationally-recognized actor and stand-up comedian Chris Tucker is set to appear at Cary, NC’s Booth Amphitheatre on Thursday, October 11. Special guest D.L. Hughley will also perform, joining Tucker for what is sure to be a hilarious night in the Tar Heel state. The upcoming live comedy show marks the two comics’ only joint appearance in North Carolina.

Tickets go on-sale this Friday, August 31 at 10 a.m. ET and can be purchased online at ETix.com or BoothAmphitheatre.com.

Chris Tucker is an award-winning actor and comedian best known for playing the role of Detective James Carter in the Rush Hour film series. He became a favorite on Russell Simmons’ HBO Def Comedy Jam in the 1990s and came to prominence in his first starring role, the 1995 film cult classic Friday starring alongside Ice Cube. In 1997, Tucker was an executive producer and co-starred in the hit movie Money Talks with Charlie Sheen and then appeared in the highly successful Luc Besson’s, The Fifth Element. In 2006, he negotiated an unprecedented $25 million salary to appear in Rush Hour 3, which at the time made him the highest paid actor in Hollywood. Outside of comedy, Tucker is a dedicated humanitarian, spending much of his spare time traveling around the world doing philanthropic work to make a difference through his Chris Tucker Foundation.

D.L. Hughley is one of the most popular and highly recognized stand-up comedians on the road today who has also made quite an impression in the television and radio arena. Most recently, Hughley served as host of his own late night talk show on CNN, D.L. Hughley Breaks the News. In addition, he starred in NBC’s Studio 60 on the Sunset Strip, hosted the BET hidden camera reality series S.O.B. Socially Offensive Behavior, starred in his own HBO comedy special entitled Unapologetic, and hosted HBO’s Def Comedy Jam as well as the BET Awards in 2008. Hughley spent four successful years starring in his own sitcom The Hughleys, and showed no signs of slowing down. It was the mega-hit The Original Kings of Comedy that launched Hughley into superstardom. The film, based on the 1999 tour featuring Hughley, Bernie Mac, Steve Harvey, and Cedric the Entertainer, garnered close to $40 million at the box office and became one of the highest selling DVDs in 2001. Hughley continues his reign on the stand-up comedy front, selling out concert halls and headlining comedy clubs across the country.

Outback Concerts is an independent, full-service concert and comedy promoter based in Nashville, TN. In addition to producing hundreds of concerts and events each year, ranging from clubs to arenas across the country and Canada, Outback Concerts also produces the Nashville Comedy Festival, and #JSUStrong, the upcoming benefit concert at Jacksonville State University in Jacksonville, AL at Burgess-Snow Football Stadium. The concert will feature the legendary ALABAMA, Jason Isbell and the 400 Unit, Charlie Daniels, and more. The company also exclusively books SMG’s Cary’s Booth Amphitheatre in Cary, NC. Outback Concerts President Mike Smardak was a 2011 inductee of the IEBA Hall of Fame. In November of 2016, Mike Smardak was honored with a distinguished NATD Award alongside Nashville’s most recognized members of the entertainment industry. In March of 2018, Smardak was honored by the T.J. Martell Foundation with the Tony Martell Outstanding Entertainment Achievement Award. Promoter Andrew Farwell was voted IEBA Rookie of the Year in 2014.