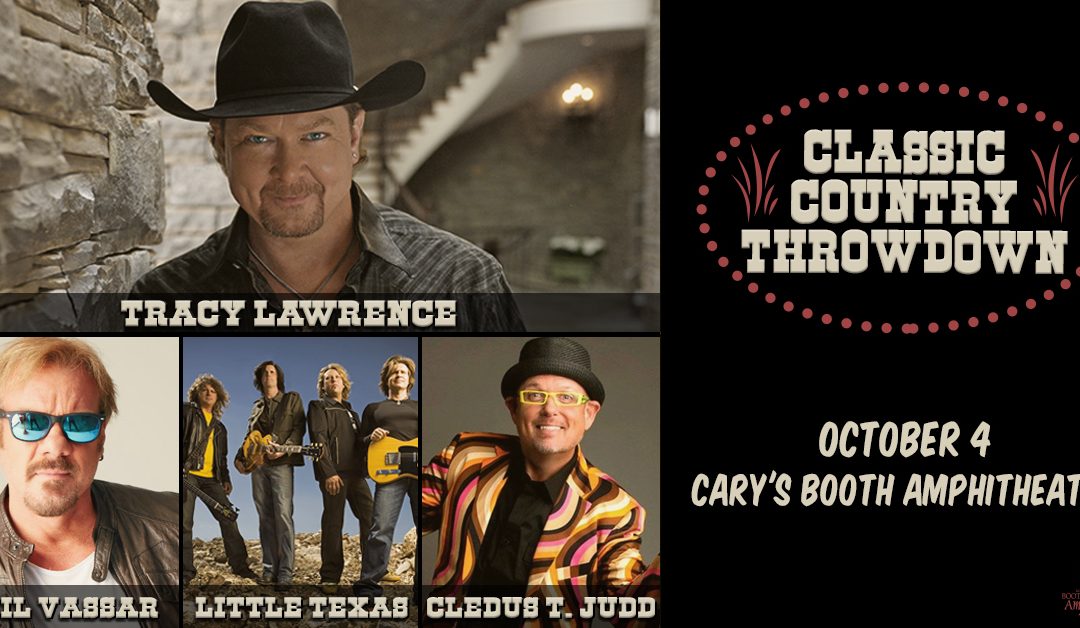 Tickets On-Sale this Friday, August 24 at 10 AM ET; Purchases Available at ETix.com or BoothAmphitheatre.com

Nashville, Tenn. (August 20, 2018) — Several familiar voices of the 90s will make their way to Cary’s Booth Amphitheatre this fall for the Classic Country Throwdown, a one night only live concert event exclusive to North Carolina. The country music extravaganza goes down on Thursday, October 4 and will feature performances by Tracy Lawrence, Phil Vassar, Little Texas and comedian Cledus T. Judd.

“It’s not a secret that I’m a traditionalist and I’m looking forward to performing some great country music with my friends in North Carolina,” says Lawrence.

Tickets go on-sale this Friday, August 24 / 10:00 a.m. ET at ETix.com or boothamphitheatre.com. A special package deal of two general admission lawn seats will be available for purchase at $50.00.

Tracy Lawrence is one of the most recognizable voices in country music with songs such as “Paint Me A Birmingham,” “Time Marches On,” “Alibis,” and “Find Out Who Your Friends Are.” The entertainer has enjoyed 22 songs on the Billboard top ten charts with 18 No. 1 singles, selling over 13 million albums. The multi-platinum CMA and ACM award-winning recording artist has helped shape the sound of country music for two decades, recently celebrating 21 in music. Few country artists have ever known the kind of success that Tracy Lawrence has earned and the influence his iconic voice has contributed to the country music genre.

Country music hitmaker Phil Vassar is a piano-pounding powerhouse on stage who taps into his audiences via social media for song requests throughout his more than 135 shows a year. Phil’s reign of signature songs include 10 No. 1 singles and 26 Top 40 hits, including “Carlene,” “Just Another Day in Paradise,” “Six-Pack Summer,” “That’s When I Love You” and many more. Vassar was racking up hits on the radio long before he even began his own recording career that has seen the release of six albums, two ASCAP Songwriter of the Year trophies, ACM’s Top New Male Vocalist and sold-out shows across the country. Vassar’s songwriting career blossomed in the mid-’90s when he landed a publishing contract with EMI and penned hits for Collin Raye (“Little Red Rodeo”), Alan Jackson (“Right on the Money”), Tim McGraw (“For a Little While”), Jo Dee Messina (“Bye Bye,” “I’m Alright”), and Blackhawk (“Postmarked Birmingham”). He signed a record deal of his own with Arista in 1998 and was named ASCAP’s Country Songwriter of the Year in 1999. Vassar continues to churn out incisive, soulful lyrics and infectious melodies that capture the heart and soul in the unique and special way that only he can.

Little Texas is an American country music band founded in Nashville, Tennessee, in 1988. Signed to Warner Bros. Records in 1991, Little Texas released its debut album First Time for Everything that year. The album’s lead off single, “Some Guys Have All the Love”, reached a peak of No. 8 on the Billboard Hot Country Singles & Tracks charts. Little Texas continued to produce hit singles throughout the mid-1990s, including the No. 1 single “My Love” and six more top ten hits. The group’s debut album earned a gold certification from the Recording Industry Association of America (RIAA), while 1993’s Big Time was certified double platinum and 1994’s Kick a Little was certified platinum.

Known for his parodies of popular country music songs, Cledus T. Judd has often been called the “Weird Al” Yankovic of country music. His albums are usually an equal mix of original comedy songs and parodies. Judd has released eleven studio albums and two EPs, and several of their singles have entered the Billboard Hot Country Songs charts. His highest chart peak is the No. 48 “I Love NASCAR”, a parody of Toby Keith’s 2003 single “I Love This Bar.”

Outback Concerts is an independent, full-service concert and comedy promoter based in Nashville, TN. In addition to producing hundreds of concerts and events each year, ranging from clubs to arenas across the country and Canada, Outback Concerts also produces the Nashville Comedy Festival, and #JSUStrong, the upcoming benefit concert at Jacksonville State University in Jacksonville, AL at Burgess-Snow Football Stadium. The concert will feature the legendary ALABAMA, Jason Isbell and the 400 Unit, Charlie Daniels, and more. The company also exclusively books SMG’s Cary’s Booth Amphitheatre in Cary, NC. Outback Concerts President Mike Smardak was a 2011 inductee of the IEBA Hall of Fame. In November of 2016, Mike Smardak was honored with a distinguished NATD Award alongside Nashville’s most recognized members of the entertainment industry. In March of 2018, Smardak was honored by the T.J. Martell Foundation with the Tony Martell Outstanding Entertainment Achievement Award. Promoter Andrew Farwell was voted IEBA Rookie of the Year in 2014.