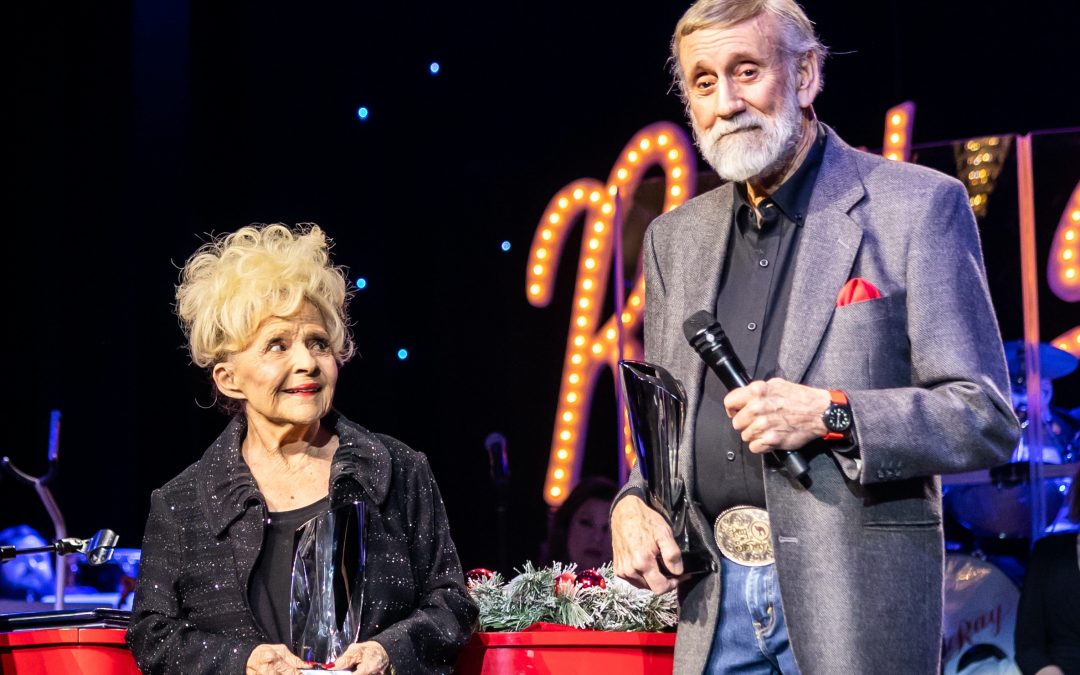 Nashville, Tenn. (December 14, 2022) — On Sunday, December 4, Nashville’s CabaRay Showroom proved to be the perfect location to surprise music legends Ray Stevens and Brenda Lee with The Cecil Scaife Visionary Award. Stevens, who was in on the planning of the event, thought he was giving the award to Lee and Lee thought she was giving it to Stevens.

“Brenda and I ended up presenting each other with Cecil Scaife Visionary Awards to benefit the Mike Curb School of Music Business at Belmont University, located here in Nashville on Music Row,” says Stevens. “It was a great night!”

Upon accepting their awards, Stevens and Lee bantered back and forth as only lifelong friends can. The two have known each other since they were 12 (Lee) and 17 (Stevens) years of age, respectively.

Senator Marsha Blackburn, a past recipient of the award, presented each of the honorees with a Senate Statement for the Congressional Record. She thanked them for the contributions they have made to Tennessee and beyond with their time and talents and helping lift others up throughout their own careers.

The special evening opened to a sold out crowd with a 20-piece orchestra accompanying Mandy Barnett showcasing Lee’s classic hit, “I’m Sorry.” Additional performances by longtime friends of both honorees: Charlie McCoy (Lee’s “Jambalaya”) Jeannie Seely (Lee’s “Too Many Rivers”), Ricky Skaggs (Stevens’ “Everything is Beautiful”) and Lang Scott (Stevens’ “Misty”). Additionally, Stevens performed Lee’s “As Usual.” The grand finale of “Rockin’ Around The Christmas Tree” was performed by The McCrary Sisters, who managed to coax Lee into joining them on-stage. Eventually, the evening’s entire lineup joined in to perform Lee’s classic holiday hit.

Among the special guests who spoke was country star Pam Tillis who reminisced of her childhood memories with Stevens and Lee, calling them “the bricks and mortar of this town.”

The Cecil Scaife Visionary Award is given annually to an individual whose life and work have made it possible for future generations to realize careers in the music industry.In the 1970s, it was the late Cecil Scaife’s vision to create a music business program for musicians, artists, songwriters, and future music business executives to formally learn the industry he loved so dearly. Through the generosity and vision of Mike Curb, Scaife’s vision grew to become the world-renowned Mike Curb College of Entertainment and Music Business. Curb was the inaugural recipient of The Cecil Scaife Visionary Award in 2008.