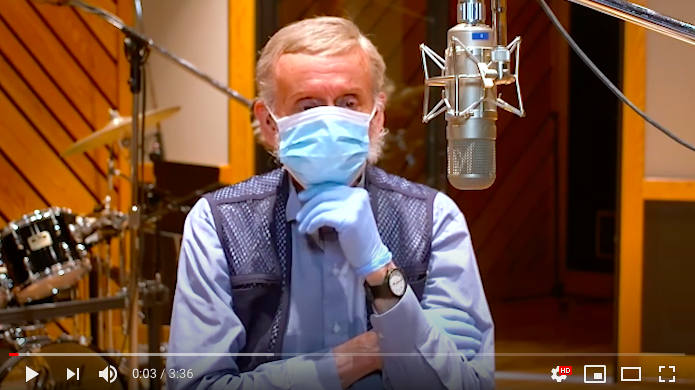 Nashville, Tenn. (September 3, 2020) — Country Music Hall of Fame member Ray Stevenshas once again “broken the internet.” In May, Stevens, who is known worldwide for his classic southern-style comedy music, debuted his latest tune, “TheQuarantine Song,” on RFD-TV’s Larry’s Country Diner. Following the airing, the video went live on the internet and quickly caught fire. “The Quarantine Song” just surpassed one million views on YouTube and currently boasts 6.8 million views on Facebook— totaling an audience of more than 7.5 million.

“Who’d a thunk it!” exclaimed Stevens upon hearing the news of the video’s online success.

On “The Quarantine Song” video, a mask and glove-clad Stevens highlights the daily struggles of living through the era of COVID-19.

“I avoid old folks and should I sneeze, I do it in my elbow, or up my sleeve,” sings Stevens. “Six feet apart, that is the rule, and I pray for the day the kids can go back to school. I’m washing my hands like a raccoon with OCD. I’ve watched Hulu, Roku, Netflix, PBS and BBC!”

Twelve-time nominated and two-time GRAMMY® Award winner Ray Stevens has spanned the generations with more than 60 years of comedic musical talent, including songs such as his multi-million selling hit “The Streak” and his classic pop standard “Everything Is Beautiful.” Throughout his career, Stevens has sold more than 40 million albums. In 2018, the music legend opened his very own Nashville entertainment venue, the CabaRay Showroom, a 35,000 square foot music venue where, during non-COVID-19 times, Stevens performs weekly live concerts. He is a member of the Nashville Songwriters Hall of Fame, has a star on the Music City Walk of Fame and was formally inducted into the Country Music Hall of Fame in the fall of 2019.