Ray Stevens to Release 50th Anniversary Edition of “Everything Is Beautiful” 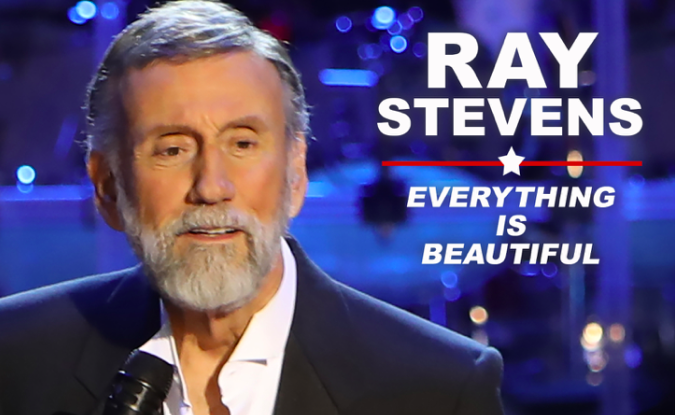 Nashville, Tenn. (October 23, 2020) — It’s been 50 years since the release of Country Music Hall of Fame member Ray Stevens‘ GRAMMY® Award-winning, multi-million selling No. 1 hit song, “Everything Is Beautiful.” To celebrate the occasion, Stevens is releasing a newly-recorded 2020 version of the tune. The legendary singer has returned to Curb Records for the new recording. The 50th Anniversary Edition of “Everything is Beautiful” drops on Friday, October 30.

“You know it doesn’t seem possible, but I first recorded this song 50 years ago,” says Stevens. “We’ve come a long way since then and still have a lot of miles left to go, so let’s not fall apart now. Let’s come together and show the world that everything really is… beautiful.”

“Everything Is Beautiful,” written and recorded by Stevens, became a renowned song that won the world over back in 1970. A winner of two GRAMMY® Awards for Best Male Pop Vocal Performance and Best Inspirational Performance, the song captured the mood of a nation with the promotion of equality and individuality. The track spent two weeks at No.1 on the Billboard Hot 100 chart and three weeks at the top spot on the Billboard AC chart.

Celebrating the 50th anniversary of the iconic song, the 2020 version finds the tune’s timely message as relevant as ever, tapping into the notion that the country must come together in the midst of division.

Two tracks of “Everything Is Beautiful” will be released later this month— a traditional recording as well as a second version that incorporates the patriotic “United We Stand.”

Next Friday, both versions of “Everything Is Beautiful” will be available for digital download here.

Stevens, who has released projects through Curb in years past, is elated to return to the company. “I’m excited to be back on Curb and look forward to having the help of a great team in my corner,” he says. Previous releases from Stevens, via Curb, have sold more than five million units, including the four-time RIAA platinum-selling Comedy Video Classics.

Past Ray Stevens albums released via Curb are available for purchase here.

Twelve-time nominated and two-time GRAMMY® Award winner Ray Stevens has spanned the generations with more than 60 years of comedic musical talent, including songs such as his multi-million selling hit “The Streak” and his classic pop standard “Everything Is Beautiful.” Throughout his career, Stevens has sold more than 40 million albums. In 2018, the music legend opened his very own Nashville entertainment venue, the CabaRay Showroom, a 35,000 square foot music venue where, during non-COVID-19 times, Stevens performs weekly live concerts. He is a member of the Nashville Songwriters Hall of Fame, the Georgia Music Hall of Fame, has a star on the Music City Walk of Fame and was formally inducted into the Country Music Hall of Fame in the fall of 2019.