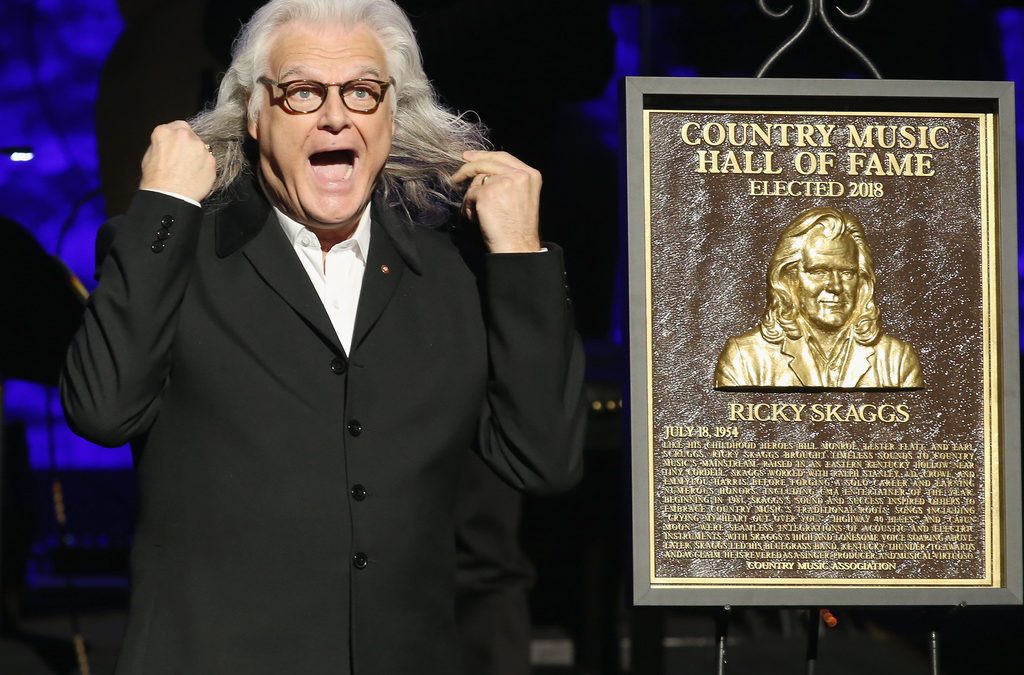 “It’s kinda hard to believe that this day has really come,” says Skaggs. “To hear someone say, ‘The newest member of the Country Music Hall of Fame’ are some of the greatest words you could ever hear this side of Heaven! I’m so grateful to be inducted into this revered Hall among these highly honored and most beloved people. It’s beyond humbling.”

Several took the stage to honor Skaggs following his induction. Brooks with Larry Cordle and Sierra Hull saluted Skaggs with “Highway 40 Blues,” Dierks Bentley crooned through “You’ve Got a Lover” and Chris Stapleton brought his distinct vocals, wailing through “The Darkest Hour is Just Before Dawn.”

“Many of the fathers and mothers that are in this Hall literally built country music from the ground up,” Skaggs adds. “They were ‘Working on a Building,’ and they built well. Their incredible talent, hard work, and love for this wonderful music has laid a deep and solid foundation that generations will stand on. I’m so thankful for their tremendous contributions. People like me could have never become a member without their sacrifice. They showed us the way, they made the music, and we followed the sound!”

One of the most moving moments of the night was an unprecedented act. After being presented with his medallion, Skaggs was asked to take off his medallion as not to scratch the instrument he was about to be asked to play. The Country Music Hall of Fame and Museum then offered Skaggs the honor of playing the instrument of his hero, Bill Monroe. This famed Gibson F-5 mandolin, which rests behind glass in the museum, was played by Skaggs when he was just 6 years old in the presence of Monroe himself. With great care, a visibly moved Skaggs took the instrument from one of the museum’s curators and lead the audience in the traditional singing of “Will the Circle Be Unbroken.” With help from Brooks and the Medallion All-Star Band, Skaggs gave a rousing, emotional performance to conclude this historic and momentous ceremony.

The CMA (Country Music Association) created the Country Music Hall of Fame in 1961 to recognize noteworthy individuals for their outstanding contributions to the format; country music’s highest honor.

Produced by the staff of the Country Music Hall of Fame and Museum, the annual Medallion Ceremony honors the inductees by highlighting their life stories, important turning points, and the breakthrough artistic achievements that elevated their careers. The inductees are celebrated with speeches, live musical tributes and original video biographies, created by the museum staff using old and often rare recorded performances, past televised interviews and historic photos culled from materials collected, stored and digitized in the museum’s Frist Library and Archives. The ceremony conveys the unique talents, personalities and backgrounds of each Hall of Fame inductee and highlights why each one deserves this prestigious honor.

Earning 12 #1 hit singles, 15 GRAMMY® Awards, 13 IBMA Awards, nine ACM Awards, eight CMA Awards (including Entertainer of the Year), two Dove Awards, the ASCAP Founders Award, three honorary Doctorate degrees, inductions into the IBMA Bluegrass Music Hall of Fame, Musicians Hall of Fame and GMA Gospel Music Hall of Fame, the 2013 Artist-In-Residence at the Country Music Hall of Fame® and Museum, an Americana Music Association Lifetime Achievement Award in the Instrumentalist category along with countless other awards, Ricky Skaggs is truly a pioneer of Bluegrass and Country music. Since he began playing music more than 50 years ago, Skaggs has released more than 30 albums and has performed thousands of live shows. He started his own record label, Skaggs Family Records, in 1997 and has since released 12 consecutive GRAMMY®-nominated albums. His latest release, Hearts Like Ours, with his wife, celebrated artist Sharon White of The Whites features the couple dueting on handpicked country love songs. And the Grand Ole Opry member has released his first-ever autobiography, “Kentucky Traveler.” The book details the life and times of Skaggs and provides a descriptive history of Country and Bluegrass music, as told by the master himself. In addition to his regular touring schedule with his band, Kentucky Thunder, he has performed a string of dates with his better half Sharon White along with guitar legend Ry Cooder on the critically-acclaimed “Cooder-White-Skaggs” tour and from time to time hits the road with versatile singer/songwriter and pianist Bruce Hornsby on another critically-acclaimed tour, “Ricky Skaggs & Bruce Hornsby with Kentucky Thunder.” Most recently, Skaggs has added Country tour dates as he plugs in and plays full shows of his chart-topping hits.