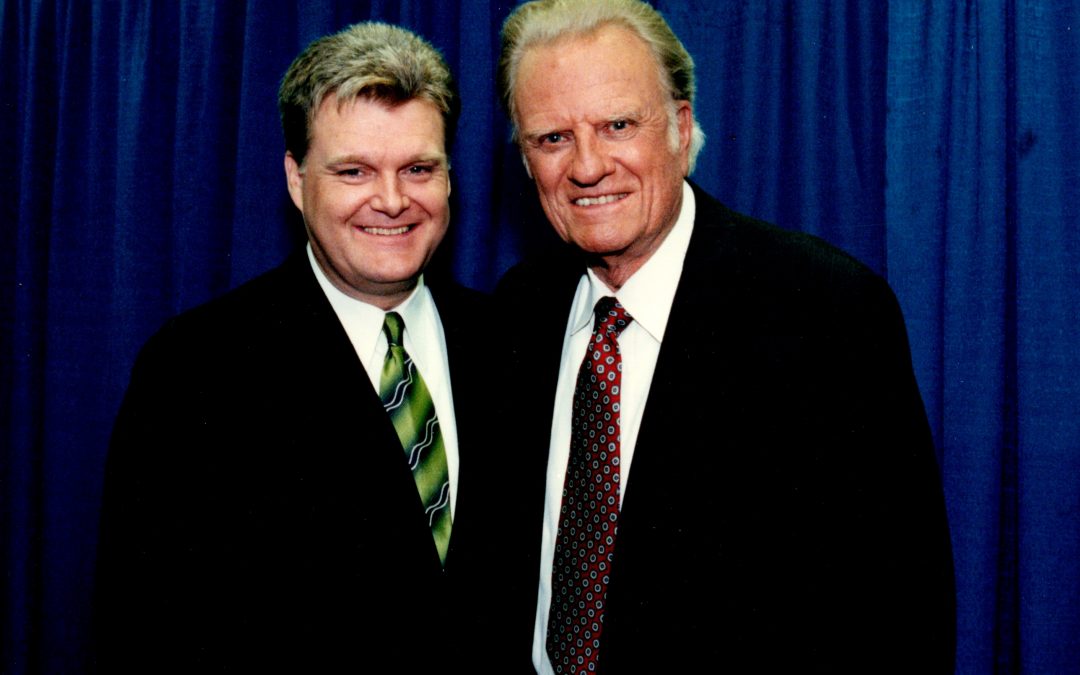 “I was up early this morning having my prayer time and Bible reading when I heard the news of Dr. Graham’s passing. The first thing I did was to thank God for sending Billy Graham into this world. My youngest daughter Molly gave her life to Jesus watching him on TV during one of his Crusades. It’s a story of millions of people just like Molly that came to Christ listening to Dr. Graham’s simple message of God’s love and forgiveness. There has never been an evangelist in our lifetime that has had the Christian integrity in ministry that Dr. Graham had. It was because he lived his life intentionally to honor Christ. He had righteous Godly men around him all the time, praying for him and praying with him everyday. He set up safeguards for his life as a husband, a father, and his life as a minister of the gospel. His ministry reflected his personal life and his personal life reflected his ministry. What a concept! He was above reproach, and he lived there always, because he never wanted to give anyone the slightest hint of doubt that he wasn’t who he said he was. His desire, first and foremost, was to honor the Lord Jesus Christ with his whole heart. He knew who he was and he knew Whose he was. He knew he was a beloved son, yet calling himself a sinner. Hard to imagine, but humility will do that to you. He believed the words of John the Baptist, when John said of Jesus, ‘He must increase and I must decrease,’ great words to live by. I’m so thankful that I got know Dr. Graham and do some of his Crusades. The first one I did was in Columbus, Ohio at a baseball field. I was up on stage singing some songs and it was pouring down the rain, big sheets of rain. I thought, all these people will go home, no one could sit through this storm, but no one left, some had umbrellas but most of them didn’t. Then all of a sudden, I looked and they were bringing Dr. Graham toward the stage in a covered golf cart, it stopped raining, it completely stopped. I knew then the favor of the Lord was on this man. I’m so grateful for the friendships I’ve made with the Graham family. Franklin is one of my dearest friends. I’m thankful that they allowed me and my family to come visit Dr. Graham and sing some songs, eat a hot dog, and pray with him at his home in Montreat, NC. The scripture says ‘a man’s gift makes way for him, and brings him before great and mighty men.’ From President Truman to President Trump, 13 Presidents, Queen Elizabeth and countless other leaders of many nations, Dr. Graham’s message has never changed. ‘For God so loved the world that he gave his only begotten Son, that whosoever shall believe in Him shall never perish but shall have everlasting life.’ Dr. Graham did not die, he just changed his address!”

Earning 12 #1 hit singles, 15 GRAMMY® Awards, 12 IBMA Awards, nine ACM Awards, eight CMA Awards (including Entertainer of the Year), two Dove Awards, the ASCAP Founders Award, three honorary Doctorate degrees, inductions into the Musicians Hall of Fame and GMA Gospel Music Hall of Fame, the 2013 Artist-In-Residence at the Country Music Hall of Fame and Museum, an Americana Music Association Lifetime Achievement Award in the Instrumentalist category along with countless other awards, Ricky Skaggs is truly a pioneer of Bluegrass and Country music. Since he began playing music more than 50 years ago, Skaggs has released more than 30 albums and has performed thousands of live shows. He started his own record label, Skaggs Family Records, in 1997 and has since released 12 consecutive GRAMMY®-nominated albums. His latest release, Hearts Like Ours, with his wife, celebrated artist Sharon White of The Whites features the couple dueting on handpicked country love songs. And the Grand Ole Opry member has released his first-ever autobiography, “Kentucky Traveler.” The book details the life and times of Skaggs and provides a descriptive history of Country and Bluegrass music, as told by the master himself. In addition to his regular touring schedule with his band, Kentucky Thunder, he has performed a string of dates with his better half Sharon White along with guitar legend Ry Cooder on the critically-acclaimed “Cooder-White-Skaggs” tour and from time to time hits the road with versatile singer/songwriter and pianist Bruce Hornsby on another critically-acclaimed tour, “Ricky Skaggs & Bruce Hornsby with Kentucky Thunder.” Most recently, Skaggs has added Country tour dates as he plugs in and plays full shows of his chart-topping hits.