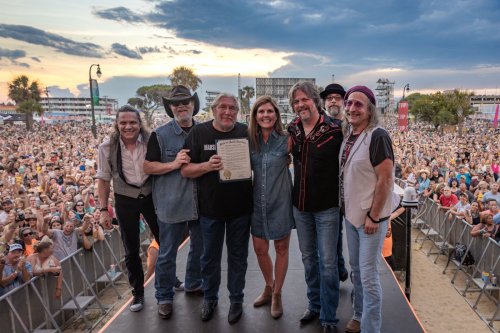 Legendary southern rock and country outfit The Marshall Tucker Band (MTB) was performing on-stage before a sea of live concertgoers when the state’s 93rd Lieutenant Governor Pamela Evette surprised the group with the honor.

“My heart was shaking as we accepted this great honor,” says MTB lead singer and founding member Doug Gray. “We will never forget that we are from the great state of South Carolina! Proud is the word of the day!”

The MTB was performing at the Carolina Country Music Fest during a stop on its national “50th Anniversary Tour.” For tour dates, visit marshalltucker.com.

Fifty years ago, The Marshall Tucker Band was founded in Spartanburg, SC. Thanks to hits like “Can’t You See,” “Heard It in a Love Song,” “Fire on the Mountain,” and “24 Hours At a Time,” the 5x Gold, 3x Platinum-selling Southern Rock group has sold millions of albums worldwide. MTB songs have been featured in major motion picture films and television shows including Breaking Bad, Blow, The Box, Swing Vote, Half Nelson, My Name Is Earl, Cold Case Files and Good Guys. CMT (Country Music Television) named the MTB’s “Can’t You See” the #4 Greatest Southern Rock Song. The MTB’s debut album, The Marshall Tucker Band, reigns as Gibson Guitar’s #5 Greatest Southern Rock Album. Ultimate Classic Rock crowned the MTB’s “Can’t You See” as the #1 Southern Rock Song and GRAMMY® Magazine named the group’s logo as one of the most distinctive and iconic brands in music.