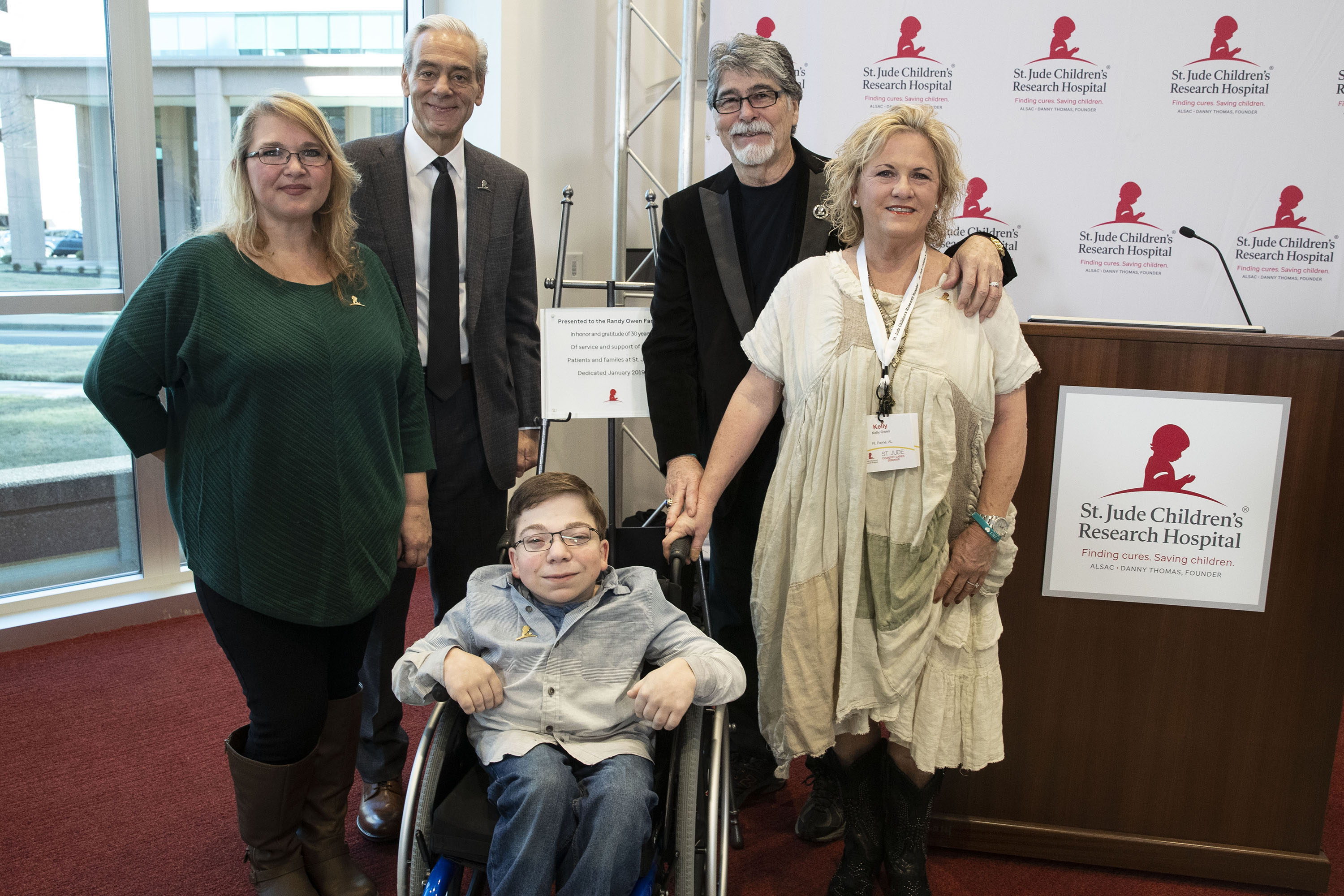 Country Cares for St. Jude Kids, the Largest Philanthropic Gathering in Country Music, has Raised More than $800 Million for Children with Cancer and Other Life-Threatening Diseases

Nashville, Tenn. (January 26, 2019) – More than 900 people in the country music industry – including radio personalities, artists, executives, label representatives and media – are gathered in Memphis this weekend for special performances and industry-insider events to celebrate the 30th anniversary of the Country Cares for St. Jude Kids® radio program. Since its inception in 1989, led by ALABAMA’s Randy Owen, Country Cares has pioneered radio philanthropic fundraising, raising a record more than $800 million for the lifesaving mission of St. Jude Children’s Research Hospital: Finding cures. Saving children.®

In celebration of this historic fundraising landmark, and in recognition of his steadfast commitment to the St. Jude mission, St. Jude Children’s Research Hospital has presented Owen and his family with the dedication of a patient family room. Owen has lead the charge to establish St. Jude as the charity of choice for the country music industry through his 30-year dedication. Country Cares is anchored by annual radiothons, comprised of 200 radio stations who share the mission of St. Jude with their listeners through various promotions and programming methods.

“Randy Owen has rallied the country music community like no other for 30 years to make a tremendous difference in helping St. Jude fulfill its lifesaving mission for our patients and their families,” says Richard Shadyac Jr., President and CEO of ALSAC, the fundraising and awareness organization for St. Jude Children’s Research Hospital. “He is proof, like our founder Danny Thomas was, that one person can make a remarkable difference in this world. With the help of his friends in the country music industry, he was instrumental in starting the Country Cares for St. Jude Kids program, and we are forever indebted to Randy and his family for their years of generosity.”

“The most important thing I’ll ever do, apart from being a father and a husband, is helping children at St. Jude,” notes Owen. “Over the past 30 years, I’ve watched children at St. Jude grow up to be happy, healthy adults. This room dedication shows that the country music industry has made a true impact, and I’m glad I could be part of that.”

Following the Country Cares format, St. Jude radio programs now reach beyond country music – including gospel, rock and Hispanic platforms. Because of programs like these, families at St. Jude never receive a bill for treatment, travel, housing or food – because all a family should worry about is helping their child live.

St. Jude Children’s Research Hospital is leading the way the world understands, treats and defeats childhood cancer and other life-threatening diseases. Its purpose is clear: Finding cures. Saving children.® It is the only National Cancer Institute-designated Comprehensive Cancer Center devoted solely to children. Treatments invented at St. Jude have helped push the overall childhood cancer survival rate from 20 percent to more than 80 percent since the hospital opened more than 50 years ago. St. Jude won’t stop until no child dies from cancer. St. Jude freely shares the discoveries it makes, and every child saved at St. Jude means doctors and scientists worldwide can use that knowledge to save thousands more children. Families never receive a bill from St. Jude for treatment, travel, housing or food – because all a family should worry about is helping their child live. Join the St. Jude mission by visiting stjude.org, liking St. Jude on Facebook, following St. Jude on Twitter and Instagram and subscribing to its YouTube channel.