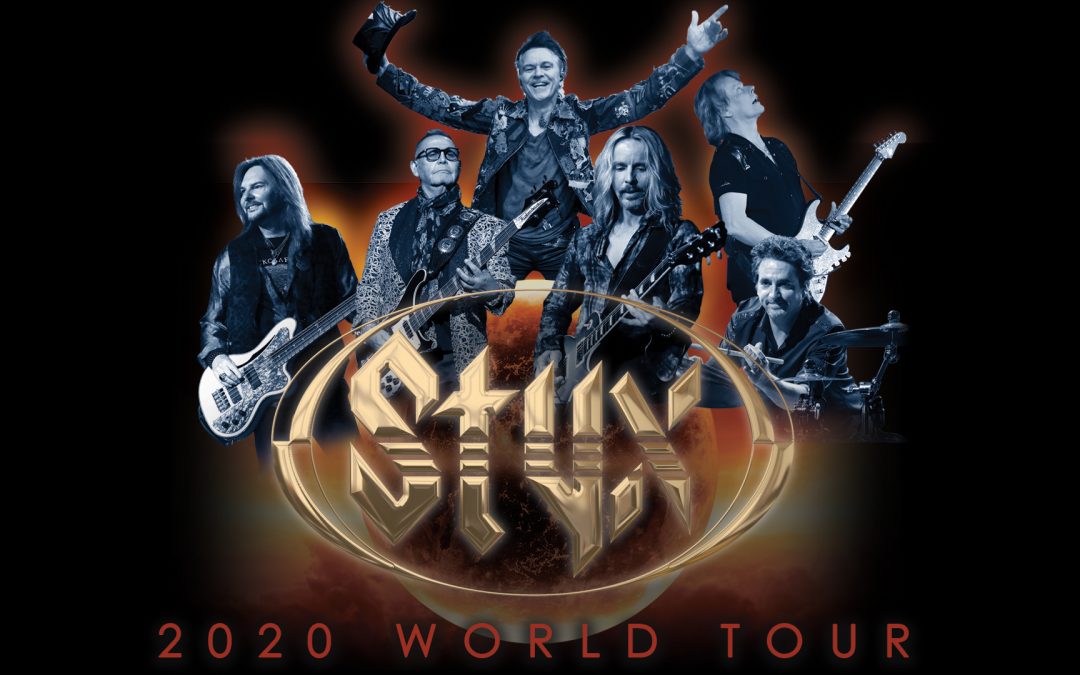 Tickets Go On Sale this Friday, February 28 at 10 A.M. / CT at Ticketmaster.com

Nashville, Tenn. (February 24, 2020)  — STYX, the first band in rock history to land four consecutive certified multi-million selling albums in a row, has announced its highly anticipated return to Nashville‘s historic Ryman Auditorium on Saturday, May 23. The concert stop in Music City is part of the group’s 2020 World Tour.

Tickets for An Evening with STYX go on sale this Friday, February 28 at 10 a.m. / CTand will be available for purchase at Ticketmaster.com, STYXWorld.com and the Ryman Auditorium box office.

The six men comprising STYX have committed to “Rockin’ the Paradise” together with audiences far and wide by entering their second decade of averaging over 100 shows a year. Each band member is determined to make the next show better than the last.

“Standing on the wood floor of the Ryman, especially center stage, it’s impossible to resist thinking about all the legendary artists and important music that’s been performed there over the years,” says STYX frontman and guitarist Tommy Shaw. “It’s an honor to return and offer up another night of STYX music as we rock those historic walls, halls, pews and windows. Come join us!”

About STYX
STYXdraws from over four decades of barn-burning chart hits, joyous singalongs, and hard-driving deep cuts. Like a symphony that builds to a satisfying crescendo, a STYXset covers a wide range of stylistic cornerstones. From the progressively sweeping splendor that is “The Grand Illusion” to the hunker-down fortitude of all that is the “Blue Collar Man,” from the majestic spiritual love for a special “Lady” to the poignant rumination on the fleeting nature of fame in “Miss America,” from an individual yearning for true connection as a “Man in the Wilderness” to a soul-deep quest to achieve what’s at the heart of one’s personal vision in “Crystal Ball,” from the regal reach-for-the-stars bravado of “Come Sail Away” to the grainy all-in gallop of that rugged “Renegade” who had it made, STYXdraws on an unlimited cache of ways to immerse one’s mind and body in their signature sound.

After 14 years, STYX’s sonically sweet 16th studio album and its most ambitious, most challenging, and most rewarding album to date, THE MISSION, was finally released June 16, 2017 on the band’s label, Alpha Dog 2T/UMe. The highly anticipated two-disc reissue of THE MISSION was released on July 27, 2018 via Alpha Dog 2T/UMe, which includes a CD of the original album, as well as a Blu-ray of THE MISSION mixed in 5.1 Surround Sound accompanied by stunning visualizations for each of the album’s 14 songs based on the album artwork. THE MISSION originally debuted on various Billboard charts, including: #6 Top Rock Albums, #11 Physical Albums, #11 Vinyl Albums, #13 Current Albums, #14 Billboard Top Albums, #16 Retail, #17 Mass Merch/Non-Traditional, #29 Digital Albums, and #45 Billboard 200 (includes catalog and streaming).

Tommy Shaw, James “JY” Young, Lawrence Gowan, Todd Sucherman and Ricky Phillips (along with the occasional surprise appearance by original bassist Chuck Panozzo), have performed more live since ’99 than all of the previous years of its career combined. Two Super Bowl appearances, Pollstar Box Office chart-topping tours with Def Leppard, Journey, Boston, REO Speedwagon, Bad Company (to name only a few), two more studio albums and no end in sight, STYX continues to conquer the planet, one venue at a time.

Outback Presents is an independent, full-service concert and comedy promoter based in Nashville, Tennessee. In addition to producing hundreds of concerts and events each year, ranging from clubs to arenas across the country and Canada, Outback Presents also produces the Nashville Comedy Festival. Outback Presents President Mike Smardak was a 2011 inductee of the IEBA Hall of Fame. In November of 2016, Smardak was honored with a distinguished NATD Award alongside Nashville’s most recognized members of the entertainment industry. In March of 2018, Smardak was honored by the T.J. Martell Foundation with the Tony Martell Outstanding Entertainment Achievement Award. Promoter Andrew Farwell was voted IEBA Rookie of the Year in 2014. For more information on Outback Presents, visit outbackpresents.com.