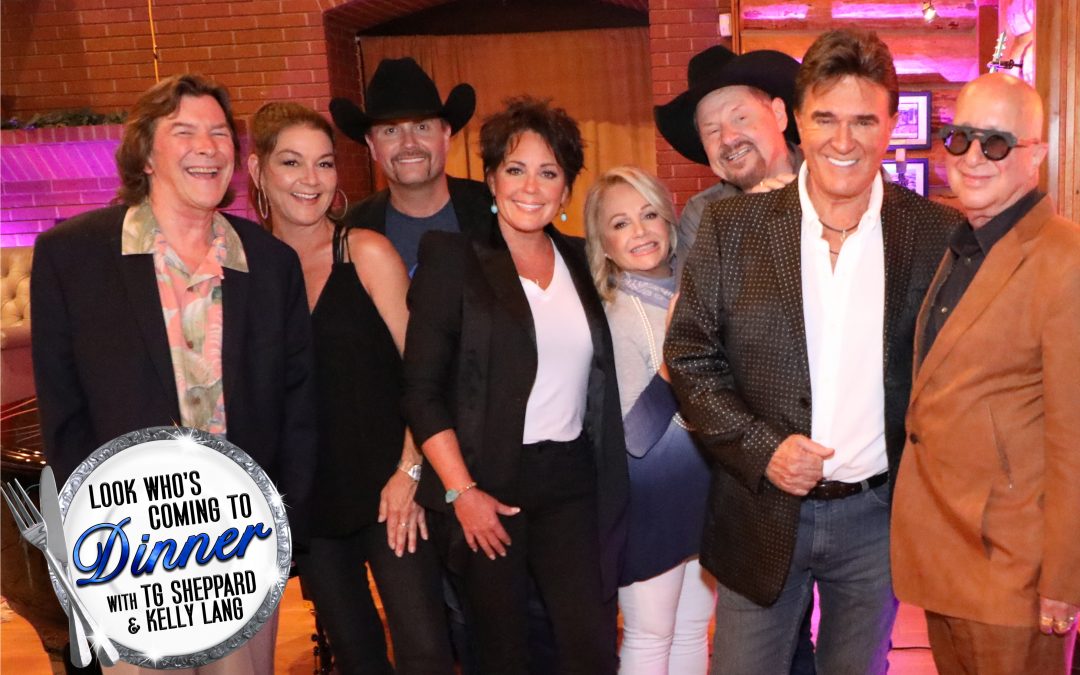 Catch the Star-Studded Premiere this November, Airing Nationally on Heartland, The Family Channel, The Country Network, AMG-TV and More

Nashville, Tenn. (November 6, 2018) — Ever wanted to know what goes down when celebrities gather for dinner? Well, now you can. Later this month, country legend TG Sheppard and his better half, singer-songwriter Kelly Lang, are inviting everyone to dine at their table, giving fans the chance to see what happens, first-hand. Today, Sheppard and Lang announced their new television program, Look Who’s Coming to Dinner, a series of one-hour specials, airing later this month on Heartland, The Family Channel, The Country Network, AMG-TV, Ride TV, Country TV, and Cayman 27.

“We’ve invited some of our good friends to join us for these TV specials,” explains Sheppard. “We wanted to give people a chance to be a ‘fly on the wall,’ so to speak, and to experience what goes on when we invite our celebrity friends to dinner.”

“Throughout our marriage, TG and I have hosted many parties that our celebrity friends have attended,” says Lang. “Inevitably, someone breaks out in song and/or tells an incredible story that a fan would love to have heard. These specials allow someone to take a behind-the-scene peek at what these dinners are like and how celebrities interact.”

The star-studded cast will speak candidly about their private lives, advice they’ve received from respected mentors, living in the public eye, as well as upcoming new projects. Filming throughout the country, each special will be taped at a different location, at a famous landmark that people will recognize.

The premiere episode, produced by Jeff Moseley/CJM Productions, was filmed at Nashville’s Fontanel Mansion — the former home of international superstar, Barbara Mandrell. The series is sponsored by Springer Mountain Farms. The upcoming premiere is a prelude to an ongoing series with additional episodes to be filmed in the coming months. Sheppard and Lang have signed-on to host multiple episodes.

(Additional network airings to be announced)

About TG Sheppard TG Sheppard has always had an unstoppable passion for music. That passion, combined with a steadfast dedication to entertainment, has made him one of the most popular live performers in country music today. With 21 #1 hit songs, his live concerts are chock full of his chart-topping tunes like “Last Cheater’s Waltz”, “I Loved ‘Em Every One,” and “Do You Wanna Go To Heaven.” With more than 40 years of show business under his belt, it’s only natural that Sheppard has developed a reputation as a solid performer who delivers exactly what audiences want. All this and more, combined with a steadfast commitment to entertainment, has truly made him one of the great legends in country music.

Kelly Lang spent most of her childhood and youth growing up in the music business as the daughter of Conway Twitty’s road manager. She has performed on Star Search, Nashville Now, Music City Tonight, and the stage of the Grand Ole Opry. In addition, she has shared the stage many times with music icon, Barry Gibb. Over the past few years, she has recorded two critically-acclaimed albums of classic love songs. One of those albums, Throwback, includes collaborations with Olivia Newton-John, Lee Greenwood and Paul Shaffer. Obsession, her most recent album, is available for purchase now at kellylang.net. Lang is married to country music legend TG Sheppard. The singer-songwriter also recently resurrected her hilarious alter-ego, XOXO. Lang created the character in 2006 as an outlet for coping with her battle with breast cancer. Today she is cancer free. For more information on XOXO, visit xoxocountry.com.