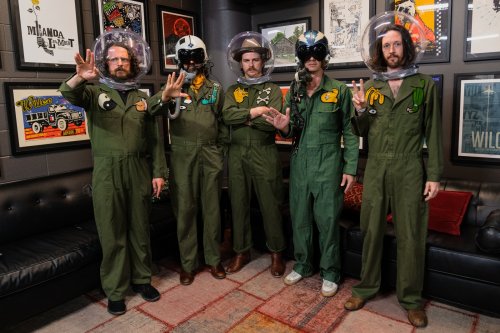 Nashville, Tenn. (Oct. 29, 2021) — Critically-acclaimed rock ’n’ roll group The Band of Heathens have teamed with legendary Americana artist Ray Wylie Hubbard for a special collab of The Temptations’ classic hit, “Papa Was a Rollin’ Stone.” The tune drops today and is available for download / streaming HERE.

“Ray had the idea to do this song,” explains Band of Heathens guitarist and vocalist Ed Jurdi. “I honestly wasn’t sure how to approach it or wrap my head around it, but then I realized, we just need to do like RWH and make it cool. Ray is like the Yoda of Texas music; ever knowing, always present and wise. I had faith that if we followed the spirit of his vision, we would somehow find the right path.”

After recording, Hubbard, who has a tenured relationship with the Heathens, was thrilled of the outcome.

“If I couldn’t do ‘Papa Was a Rollin’ Stone’ with The Temptations the next best would be to do it with The Band of Heathens, so I did,” adds Hubbard. “Was cool as riding a wall of death motorcycle.”

“Papa Was a Rollin’ Stone” is the first to be released from the band’s upcoming album, Remote Transmissions, Vol 1. More details on the forthcoming compilation will be released in the coming months.

About The Band of Heathens
The Band of Heathens are an American rock ‘n’ roll band from Austin, Texas. The band was originally formed by Ed Jurdi, Gordy Quist and Colin Brooks in 2005. The Band of Heathens has had some lineup changes through the years, but the core lineup of founding members Jurdi and Quist on guitars, Nealon on keys, and Richard Millsap on drums has been together since 2012 when Millsap joined the group. Bassist Jesse Wilson came on board in 2017. In 2008 the band released their first, self-titled, studio album. Produced by Ray Wylie Hubbard, and featuring notable guests Patty Griffin, Stephen Bruton, and Gurf Morlix, the record went to #1 on the Americana Music Association’s radio charts. In November 2008 the album was ranked 8th place on the Americana Music Association’s Top 100 Albums of the Americana Charts for 2008. The band’s last release was 2020’s critically acclaimed album Stranger produced by GRAMMY award winning producer, Tucker Martine.