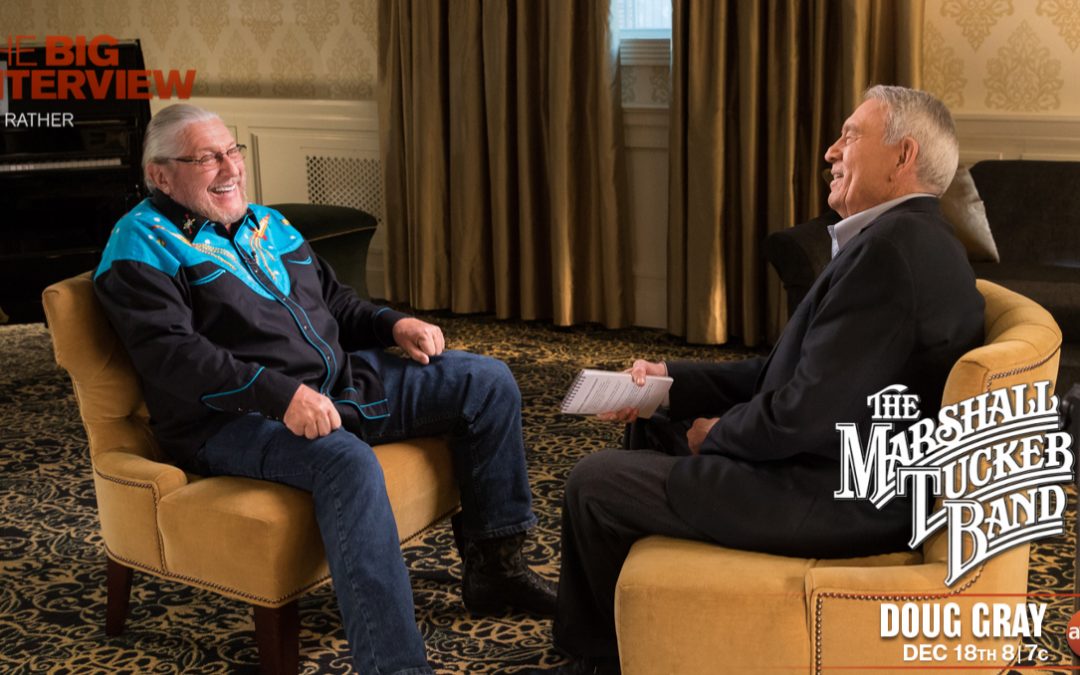 Nashville, Tenn. (December 11, 2019) — Iconic multi-platinum selling southern rock group The Marshall Tucker Band (MTB) is set to be profiled by veteran journalist Dan Rather on his national television show, The Big Interview with Dan Rather. During the hour-long program, MTB frontman Doug Gray sits down with Rather to discuss the band’s near five decade career and the history of southern rock.

“What a great pleasure being with and having a nice conversation with Mr. Dan Rather,” says Gray. “Although I had just met him, I felt as if we had known each other for years.”

From the early years of the band to present day, Gray and Rather dig deep to tell the tale of one of the most successful groups in the history of southern rock. Rather also gets personal with Gray about his upbringing, his drive to perform and the darker moments of life on the road.

“The many things that we talked about brought out great memories, as well as some sad for both of us,” notes Gray. “What a great guy. Thank you sir for a great time and for allowing us to tell the story of The Marshall Tucker Band.”

Nearly 50 years ago, The Marshall Tucker Band was founded in Spartanburg, SC. Thanks to hits like “Can’t You See,” “Heard It In A Love Song,” “Fire On The Mountain,” and “24 Hours At A Time,” the 5x Gold, 3x Platinum-selling Southern Rock group has sold millions of albums worldwide. MTB songs have been featured in major motion picture films and television shows including Breaking Bad, Blow, The Box, Swing Vote, Half Nelson, My Name Is Earl, Cold Case Files and Good Guys. CMT (Country Music Television) named the MTB’s “Can’t You See” the #4 Greatest Southern Rock Song. The MTB’s debut album, The Marshall Tucker Band, reigns as Gibson Guitar’s #5 Greatest Southern Rock Album. UltimateClassicRock.com crowned the MTB’s “Can’t You See” as the #1 Southern Rock Song and in 2013, GRAMMY® Magazine named the group’s logo as one of the most distinctive and iconic brands in music. For more information on The Marshall Tucker Band, visit marshalltucker.com or the official Facebook Page.