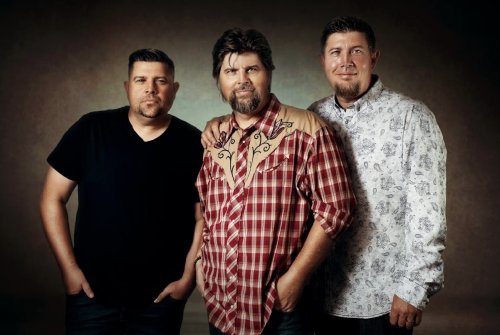 As brothers Chad, Dennijo and Andy Sitze (collectively the Flat River Band) began searching for songs for their latest project, they had no clue what would transpire. They knew they wanted it to be big but they never imagined they’d land guest vocals by the legendary Gatlin Brothers, as well as gospel music quartet The McCrary Sisters.

For the new compilation, the brothers tossed around the idea of recording the Gatlins’ 1977 No. 1 hit “I Just Wish You Were Someone I Love.”

“We just love the harmonies on that song, and no one can harmonize it like the Gatlins,” explains Andy.

During their youth, Dennijo recalls his mother playing “All the Gold in California” on the cassette player. “Back when we were kids living in a trailer park, mama taught us how to harmonize listening to the Gatlin Brothers,” he says. “This song was a no-brainer.”

So it was decided. The Flat River Band would include the Gatlins’ smash hit on Sights and Sounds. The brothers recorded the tune, then a friend suggested they reach out to the Gatlin camp for a guest vocal appearance. “We reached out to them and waited patiently for a reply,” notes Chad.

“We were blown away by the response. Larry said he loved our version and would love to be apart of it for free. We got together with Larry, Steve and Rudy and recorded it at Creative Workshop Studios, the same place the original song was recorded. And to top it off, the Gatlins agreed to appear in the music video which we shot at Tootsie’s Orchid Lounge in Nashville!”

For the Flat River Band, an additional guest vocal appearance by The McCrary Sisters was the icing on the cake.

“The brothers and I have always loved The McCrary Sisters,” explains Chad. “Their daddy was a founding member of the Fairfield Four who we used to listen to and learned songs from when we had our family band. It only made sense to reach out to them and pitch the idea about singing with us on a song I wrote called ‘Shining Through My Window.’ Luckily, they also said yes!”

The EP also includes a Crosby, Stills & Nash cover, “Helplessly Hoping,” and two other songs co-written by the brothers: “The River Song” and “Ain’t a Woman Like a River.”

Sights and Sounds is available for download/streaming now HERE.

2. I Just Wish You Were Someone I Love

4. Shining Through My Window

The Flat River Band, consisting of three brothers Andy, Chad and Dennijo Sitze, grew up in a multi-generational family band. Performing alongside their parents and grandparents, they held residencies at Silver Dollar City in Branson, Missouri and at Dollywood in Pigeon Forge, Tennessee. Throughout their tenure in music, the Missouri natives have charted #1 hits on the bluegrass gospel charts and have opened for The Chicks’ Natalie Maines, Alison Krauss, Ricky Skaggs, Rhonda Vincent, TG Sheppard, and more. The trio’s songs can be found in the 2018 movie The Least of These — A Christmas Story, featuring Duane Allen (Oak Ridge Boys), Deborah Allen, and Tayla Lynn (Loretta Lynn’s granddaughter).

For more information on the Flat River Band, visit flatriverband.com.