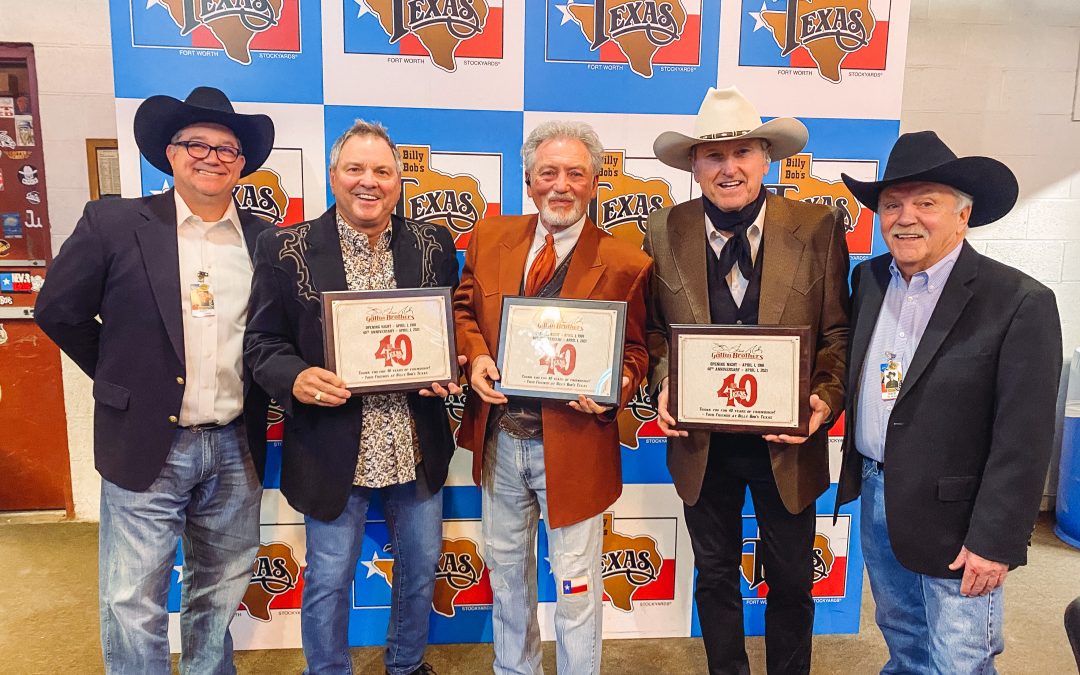 Forty years ago on April 1, 1981, Billy Bob’s Texas opened its doors in Fort Worth, Texas. The evening featured a live concert performance by the Gatlin Brothers. It was only appropriate the venue bring back the brothers to commemorate the anniversary.

“A great time was had by all,” says Larry. “It brought back a lot of wonderful memories, and I think we made some new ones on Thursday night. God Bless Texas!”

The house was packed during Thursday night’s anniversary concert. The Gatlins performed hit after hit including “All the Gold in California,” “Houston (Means I’m One Day Closer to You),” “Broken Lady,” “Statues Without Hearts,” “Night Time Magic,” and more.

Billy Bob’s Texas presented the brothers with celebratory plaques to cement the anniversary.

The close family harmonies of Larry, Steve & Rudy: The Gatlin Brothers have given the trio a signature sound that led to country classics like “All the Gold in California” and “Houston (Means I’m One Day Closer to You).” The brothers won a GRAMMY® for their 1976 breakthrough hit, “Broken Lady,” and reached #1 with several other songs soon thereafter. Along with five career nominations for the ACM Vocal Group, the Gatlin Brothers picked up three 1979 trophies: Single of the Year (“All the Gold in California”), Album of the Year (Straight Ahead) and Male Vocalist of the Year for Larry Gatlin. The brothers were also nominated for multiple CMA Awards including Vocal Group of the Year, Single of the Year, and Entertainer of the Year. Larry Gatlin has written songs recorded by Elvis Presley, Glen Campbell, Barbra Streisand, Johnny Cash, Kris Kristofferson, Dottie West, Roy Orbison, Barry Gibb and countless gospel artists including the Gaither Vocal Band, the Booth Brothers, the Isaacs and many more. Larry was formally inducted into the prestigious Nashville Songwriters Hall of Fame in the fall of 2019. For more information on the Gatlin Brothers, visit gatlinbrothers.com or follow them on social media: Facebook | Twitter | Instagram

About Billy Bob’s Texas
Located in the heart of the Fort Worth Stockyards National Historic District, the 100,000 square foot cattle barn became Billy Bob’s Texas in 1981. Since then more than 17 million visitors have enjoyed live entertainment and real bull riding at “The World’s Largest Honky Tonk”.The facility can hold 6,000 rowdy patrons on a given night and has been host to hundreds of musical acts, from Alan Jackson to ZZ Top. On Fridays and Saturdays, the venue also features live bull riding – a step up from the mechanical variety. It seems like an unlikely source for a series that has sold millions of albums. Billy Bob’s has been named the Country Music Club of the Year 10 times by the Academy of Country Music.