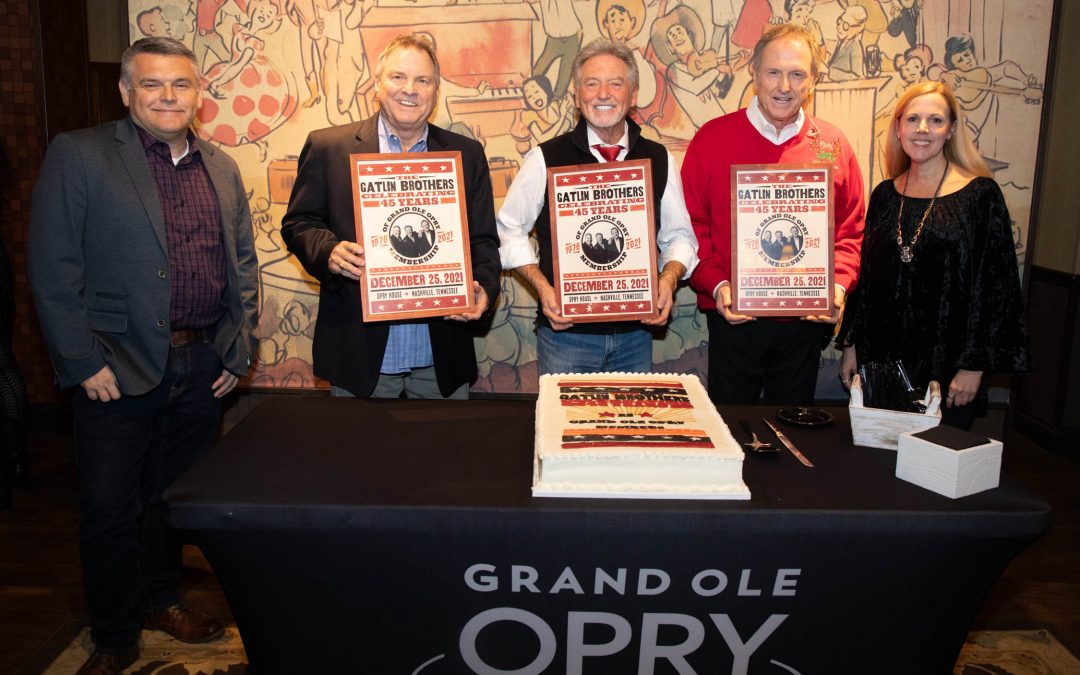 “One of the very happiest days of our lives was 45 years ago, Christmas Day, when the folks at the Grand Ole Opry asked us to be members of their family,” explains Larry. “We are grateful and honored every time we walk on that stage. God Bless you all and Merry Christmas!”

Last week, the brothers celebrated the occasion while performing on a special Christmas edition of the Opry’s broadcast. Backstage, the Gatlins were presented with a cake and special Hatch Show Prints to commemorate their upcoming 45th anniversary as members of the historic institution.

About Larry, Steve & Rudy: The Gatlin BrothersThe close family harmonies of Larry, Steve & Rudy: The Gatlin Brothers have given the trio a signature sound that led to country classics like “All the Gold in California” and “Houston (Means I’m One Day Closer to You).” The brothers won a GRAMMY® for their 1976 breakthrough hit, “Broken Lady,” and reached #1 with several other songs soon thereafter. Along with five career nominations for the ACM Vocal Group, the Gatlin Brothers picked up three 1979 trophies: Single of the Year (“All the Gold in California”), Album of the Year (Straight Ahead) and Male Vocalist of the Year for Larry Gatlin. The brothers were also nominated for multiple CMA Awards including Vocal Group of the Year, Single of the Year, and Entertainer of the Year. Larry Gatlin has written songs recorded by Elvis Presley, Glen Campbell, Barbra Streisand, Johnny Cash, Kris Kristofferson, Dottie West, Roy Orbison, Barry Gibb and countless gospel artists including the Gaither Vocal Band, the Booth Brothers, the Isaacs and many more. Larry was formally inducted into the prestigious Nashville Songwriters Hall of Fame in the fall of 2019.