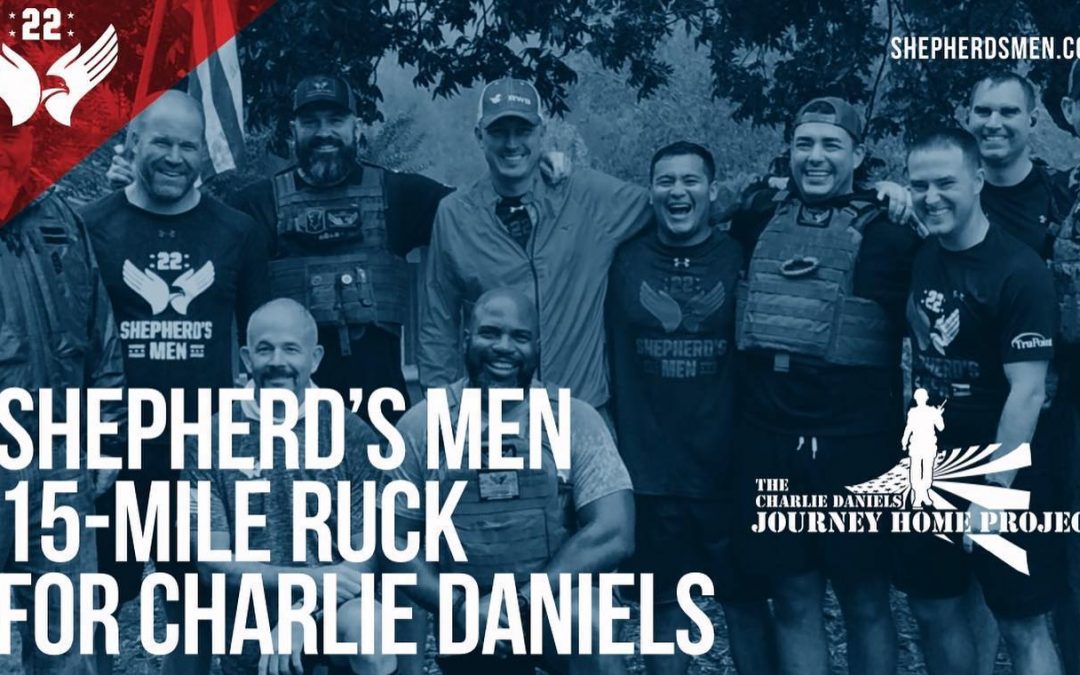 Nashville, Tenn. (May 21, 2021) — Next week leading into Memorial Day weekend, The Charlie Daniels Journey Home Project (TCDJHP) will team with the Shepherd’s Men (of the Atlanta-based Shepherd’s Center) to honor its founder, the late Charlie Daniels. Each spring, the Shepherd’s Men organizes a multi-city event where participants run, march, and swim to bring awareness to veteran suicides. This year, during the Nashville stop on Thursday, May 27, participants will strap-on 83 pounds of weight, representing Daniels’ 83 years of life.

“Veteran suicides were a critical concern to Charlie, and just a few weeks before he passed, we agreed that this issue should become a major priority within our overall mission,” explains TCDJHP co-founder and Daniels’ longtime manager David Corlew. “He believed so much in the Sheperd’s Men’s work, so this is an epic way of honoring Charlie and continuing his mission of saving lives.”

The 15-mile ruck march will begin at 9 AM at Daniels’ grave in Mt. Juliet, TN, and will end at Castle Heights Military Academy in Lebanon, TN. To see them off, Daniels’ wife, Hazel Daniels, will be in attendance at the gravesite. A free to the public reception featuring a live performance by country star Darryl Worley will immediately follow (approx. 2 PM) at Sammy B’sRestaurant, located inside the Castle Heights Military Academy.

The Shepherd’s Men’s relationship with TCDJHP began several years ago when Daniels began partnering with the group for annual fundraising events benefiting veterans. To date, the two organizations have collectively raised significant funding for injured veterans across the nation.

“Our alliance with the Shepherd’s Center has spanned over eight years,” explains TCDJHP co-founder and Daniels’ longtime manager David Corlew. “The progress and success that this partnership has witnessed is impressive. These results continue to motivate us in the fight against the epidemic of suicides within our veterans community. Much has been accomplished but there is so much more left to do.”

Last month, TCDJHP and the Shepherd’s Men teamed for an Atlanta-area event that featured a live concert by country star Chris Young. The fundraiser raised more than $300,000 for our nation’s vets.

The Charlie Daniels Journey Home Project (TCDJHP) is a not-for profit organization that assists other not-for-profits in securing funds to help causes that benefit veterans of the United States Armed Forces. The organization was co-founded in 2014 by the late country music legend Charlie Daniels and his manager, David Corlew. Board members include Corlew, Major General Terry “Max” Haston (retired) and most recently in 2020, Hazel Daniels. Conscious of the need to assist our nation’s veterans, TCDJHP partners with organizations that do the most good, with the least overhead. Working in tandem with these organizations, TCDJHP is making a difference in the lives of American patriots. TCDJHP’s daily operations rely solely on public donations.

To donate or for more information, visit thecharliedanielsjourneyhomeproject.org.

Shepherd’s Men is an organization comprised of dedicated patriots committed to creating advocacy and opportunity for our nation’s heroes who have been affected by the hidden injuries of war. They serve our noble warriors by means of outreach, empowerment and the funding of treatment. It is their belief that victory in combat is achieved on two fronts – on the field and in the mind. Shepherd’s Men is raising funds and awareness for the SHARE Military Initiative at Shepherd Center in Atlanta. This comprehensive rehabilitation program focuses on assessment and treatment for veterans of the Iraq and Afghanistan wars who suffer from traumatic brain injury and post traumatic stress disorders. For more information, please visit shepherdsmen.com.