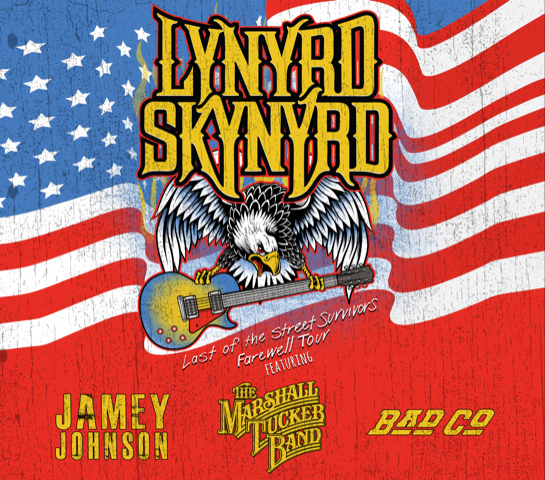 Nashville, Tenn. (June 14, 2018) — The Marshall Tucker Band (MTB) has signed on as featured talent for 14 of 21 newly-announced live concert dates on the two-year Lynyrd Skynyrd Last of the Street Survivors Farewell Tour.

“Great news! We are thrilled to be able continue onward celebrating the legacy of Lynyrd Skynyrd,” says MTB lead singer Doug Gray. “Lots of new dates have been announced. Thanks to the Skynyrd team and fans for having The Marshall Tucker Band along for the ride during this magical time in the history of southern rock.”

The two-year farewell tour crosses the country throughout the rest of this year to give fans one last memorable night of Skynyrd’s classic American Rock-and-Roll. The 2019 dates for Lynyrd Skynyrd’s farewell tour will be announced soon.

Gray adds, “This tour is very special to The Marshall Tucker Band. We want the fans to continue with us to pay respect to all of our FREE BIRDS. Can’t wait to see everyone together again on tour!”

Tickets are on-sale now at LiveNation.com.

More than 45 years ago, The Marshall Tucker Band was founded in Spartanburg, SC. Thanks to hits like “Can’t You See,” “Heard It In A Love Song,” “Fire On The Mountain,” and “24 Hours At A Time,” the 5x Gold, 3x Platinum-selling Southern Rock group has sold millions of albums worldwide. MTB songs have been featured in major motion picture films and television shows including Breaking Bad, Blow, The Box, Swing Vote, Half Nelson, My Name Is Earl, Cold Case Files and Good Guys. CMT (Country Music Television) named the MTB’s “Can’t You See” the #4 Greatest Southern Rock Song. The MTB’s debut album, The Marshall Tucker Band, reigns as Gibson Guitar’s #5 Greatest Southern Rock Album. UltimateClassicRock.com crowned the MTB’s “Can’t You See” as the #1 Southern Rock Song and in 2013, GRAMMY® Magazine named the group’s logo as one of the most distinctive and iconic brands in music.

***Suggested Tweet*** @MarshallTucker saddles up to join the @Skynyrd Last of the Street Survivors Farewell Tour!