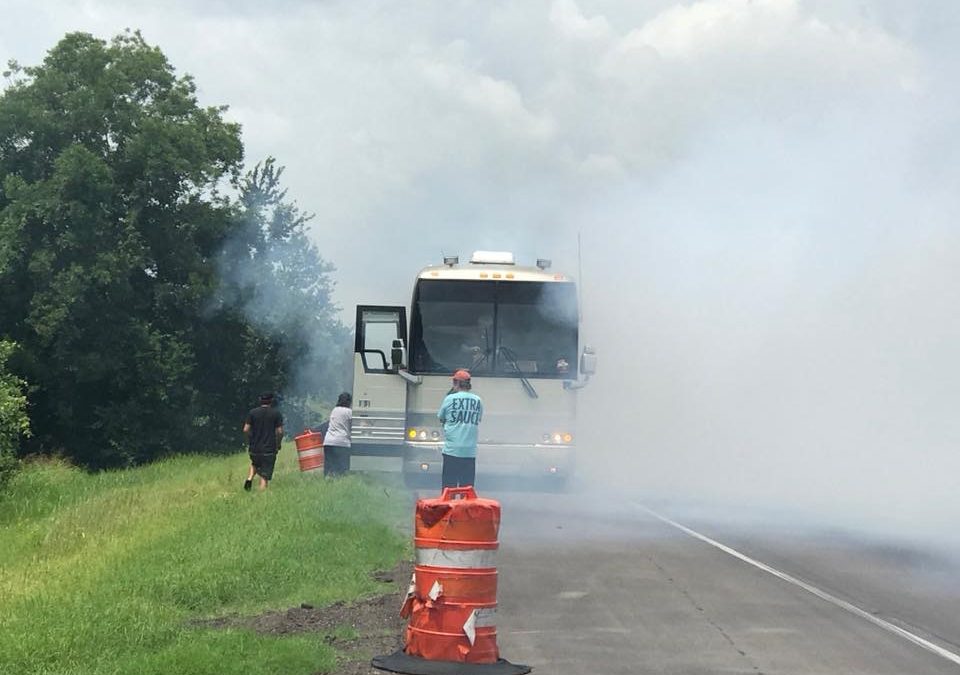 Nashville, Tenn. (June 26, 2018) — GRAMMY®, ACM and CMA award-winning band Shenandoah were spinning the tires a little too hard this weekend on their 30th Anniversary tour, when their tour bus caught fire while on the interstate in Forest City, Arkansas.

Calling on the city’s first responders, firefighters were able to smother the flames and stop the fire from spreading. The band was unable to board the bus again due to the amount of smoke, but are all now home safe. The fire is believed to be the result of a faulty turbo.

“It’s one of the things you always know is possible. You certainly never want it to happen, but it does, and it did. The biggest concern is the safety of the guys we run the highways with,” stated frontman Marty Raybon. “The bus is just a piece of machinery that gets you from one point to the other. We’re so truly grateful no one was injured, and The Lord was watching over us. I don’t want us to ever keep the road that hot again. I do say that with a hardy chuckle!”

Shenandoah continues to “heat up” with not only a heavy touring schedule but their newest single “That’s Where I Grew Up” debuted as the second most added on the Music Row Chart banking 29 first-week adds (second only to Garth Brooks). This marks Shenandoah’s greatest radio debut in 20 years.

“It is such a treat to have Marty’s voice out front on a new Shenandoah song,” says Charlie Cook, VP Country Formats/Cumulus. “The tune brings back the sound that made them such hitmakers but also connects with 2018.”

The nostalgic new ballad is the second single to be released from the Alabama natives’ first new album in over two decades — Reloaded. The record invites new and old fans alike to experience the legendary act’s live concert, as the band recut nine their most iconic hits out on the road, then enlisted the help of Rascal Flatts’ Jay DeMarcus to produce three brand-new songs, which includes the heartfelt track.

Recently the award-winning band stopped by the CMA on Wednesday, June 19, for staff to experience their new album as its meant to be — live — performing the band’s No. 1 hits such as “Two Dozen Roses,” “Next to You, Next to Me,” and “Church on Cumberland Road” as well as current radio singles “Noise” and “That’s Where I Grew Up.”