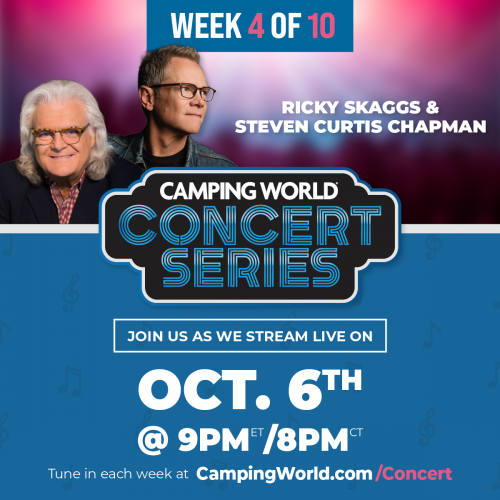 “Getting to work with Steven Curtis Chapman is always a treat,” says Skaggs. “Performing Bluegrass music with him for this show is going to be amazing.”

Last year, Chapman recruited Skaggs to collaborate with him on his latest release, Deeper Roots: Where the Bluegrass Grows. On the album, the two perform together on a Bluegrass rendition of Chapman’s 1999 chart-topper, “Dive.” The song reached No. 1 on the Bluegrass Today Weekly Airplay chart.

Running through November 24, Camping World®’s Taking the Highways Across America concert series, hostedby Country music radio personality Shawn Parr, livestreams on select Tuesdays at 8:00 p.m. / CT. Each week, fans are entertained by top recording artists performing both their top hits and new music in the comfort of their own home studio or backyard.

About Ricky Skaggs
Earning 12 #1 hit singles, 15 GRAMMY® Awards, 13 IBMA Awards, nine ACM Awards, eight CMA Awards (including Entertainer of the Year), two Dove Awards, the ASCAP Founders Award, three honorary Doctorate degrees, inductions into the Country Music Hall of Fame, IBMA Bluegrass Music Hall of Fame, National Fiddler Hall of Fame, Musicians Hall of Fame, and GMA Gospel Music Hall of Fame, the 2013 Artist-In-Residence at the Country Music Hall of Fame® and Museum, an Americana Music Association Lifetime Achievement Award in the Instrumentalist category along with countless other awards, Ricky Skaggs is truly a pioneer of Bluegrass and Country music. Since he began playing music over 60 years ago, Skaggs has released more than 30 albums and has performed thousands of live shows. He started his own record label, Skaggs Family Records, in 1997 and has since released 12 consecutive GRAMMY®-nominated albums. His latest release, Hearts Like Ours, with his wife, celebrated artist Sharon White of The Whites features the couple dueting on handpicked country love songs. And the Grand Ole Opry member has released his first-ever autobiography, “Kentucky Traveler.” The book details the life and times of Skaggs and provides a descriptive history of Country and Bluegrass music, as told by the master himself. In addition to his regular touring schedule with his band, Kentucky Thunder, he has performed a string of dates with his better half Sharon White along with guitar legend Ry Cooder on the critically-acclaimed “Cooder-White-Skaggs” tour and from time to time hits the road with versatile singer/songwriter and pianist Bruce Hornsby on another critically-acclaimed tour, “Ricky Skaggs & Bruce Hornsby with Kentucky Thunder.” Most recently, Skaggs has added Country tour dates as he plugs in and plays full shows of his chart-topping hits.For more information on Ricky Skaggs, visit rickyskaggs.com.

About Steven Curtis Chapman
In a career that has spanned over 30 years, Steven Curtis Chapman is the most awarded artist in Christian music history with 59 Gospel Music Association Dove Awards, five GRAMMYs®, an American Music Award, 49 No. 1 singles, selling more than eleven million albums and with ten RIAA-certified gold or platinum albums to his credit. Chapman also became a best-selling author in 2017 with his memoir “Between Heaven and the Real World: My Story.” He has been featured on “Good Morning America,” “CBS Sunday Morning,” CNN, MSNBC, “60 Minutes,” E! Entertainment, “The Today Show,” “Fox & Friends,” “CBS This Morning,” and “The Tonight Show,” Glenn Beck’s “The Blaze,” along with appearing in the pages of People,Billboard, Parents Magazine, and more. Chapman’s newest record, Deeper Roots: Where the Bluegrass Grows, debuted at No. 1 on the iTunes Country Albums chart, spent months as the No. 1 Billboard Bluegrass Album, and earned him his 49th No. 1 single with the Bluegrass version of his song “Dive” featuring Ricky Skaggs. A vocal supporter of adoption, Chapman, along with his wife Mary Beth, founded Show Hope in 2003, a nonprofit organization that helps restore the hope of a family to orphans. For more information on Steven Curtis Chapman, visit stevencurtischapman.com.

About Camping World Holdings
Camping World Holdings, headquartered in Lincolnshire, Illinois, is the leading outdoor and camping retailer, offering an extensive assortment of recreational vehicles for sale, RV and camping gear, RV maintenance and repair and the industry’s broadest and deepest range of services, protection plans, products and resources. Since the Company’s founding in 1966, Camping World has grown to become one of the most well-known destinations for everything RV, with over 140 retail locations in 36 states and a comprehensive e-commerce platform. Coupled with an unsurpassed portfolio of industry-leading brands including, Gander Outdoors, Gander RV, Good Sam, Overton’s, The House, and Windward/W82, Camping World Holdings has become synonymous with outdoor experiences. Camping World’s stock is traded on the New York Stock Exchange under the symbol “CWH.”