Tune-in: ‘The Big Interview with Dan Rather’ Spotlights Ricky Skaggs 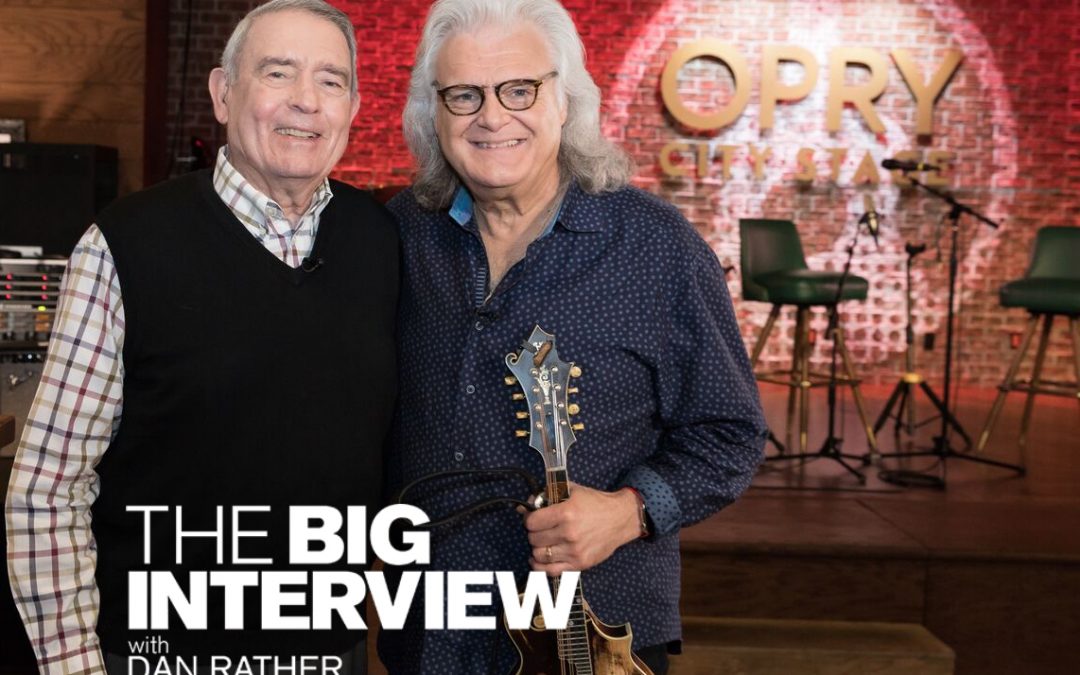 During the discussion, Skaggs delves into his passion for performing and explains what drives him to take the stage each night, saying, “It don’t matter if you’re big on the charts, it don’t matter if you’re sellin’ tons of records and all that kind of stuff… I play this music because I’m called to it and I love it.” Reflecting on how the talented young musicians he surrounds himself with have inspired him to keep country’s vibrant past alive in the present, Skaggs says, “They’re just amazing players, and the reason they’re with me is they want that tie to the past. They want to know the history of the music. And I think it gets across to the audience… it’s a beautiful thing, it really, truly is. And to be part of that family is just incredible.” Watch a preview HERE.

Additionally, Skaggs recalls growing up under the guidance of legendary mentors, and how that has impacted his own rise as a country music legend; shows off his impressive mandolin skills; tells a charming story about the day he was born, when his loud cries led the doctor to exclaim that he was destined to either be a pastor or a singer; and shares his thoughts on being inducted into the Country Music Hall of Fame and the IBMA Bluegrass Hall of Fame in the same year, joining an exclusive club of iconic performers who have been selected to both institutions.

Earning 12 #1 hit singles, 15 GRAMMY® Awards, 13 IBMA Awards, nine ACM Awards, eight CMA Awards (including Entertainer of the Year), two Dove Awards, the ASCAP Founders Award, three honorary Doctorate degrees, inductions into the Country Music Hall of Fame, IBMA Bluegrass Music Hall of Fame, National Fiddler Hall of Fame, Musicians Hall of Fame, and GMA Gospel Music Hall of Fame, the 2013 Artist-In-Residence at the Country Music Hall of Fame® and Museum, an Americana Music Association Lifetime Achievement Award in the Instrumentalist category along with countless other awards, Ricky Skaggs is truly a pioneer of Bluegrass and Country music. Since he began playing music more than 50 years ago, Skaggs has released more than 30 albums and has performed thousands of live shows. He started his own record label, Skaggs Family Records, in 1997 and has since released 12 consecutive GRAMMY®-nominated albums. His latest release, Hearts Like Ours, with his wife, celebrated artist Sharon White of The Whites features the couple dueting on handpicked country love songs. And the Grand Ole Opry member has released his first-ever autobiography, “Kentucky Traveler.” The book details the life and times of Skaggs and provides a descriptive history of Country and Bluegrass music, as told by the master himself. In addition to his regular touring schedule with his band, Kentucky Thunder, he has performed a string of dates with his better half Sharon White along with guitar legend Ry Cooder on the critically-acclaimed “Cooder-White-Skaggs” tour and from time to time hits the road with versatile singer/songwriter and pianist Bruce Hornsby on another critically-acclaimed tour, “Ricky Skaggs & Bruce Hornsby with Kentucky Thunder.” Most recently, Skaggs has added Country tour dates as he plugs in and plays full shows of his chart-topping hits. For more information, visit rickyskaggs.com.